A look back at 2018 through 18 of our favorite Amazon photos.
By Day One Staff

Over the course of the year, we’ve captured singular moments that collectively tell the larger story of Amazon’s enduring connection with its customers, employees, and communities around the world.

Amazonians – from the newest hire to the tenured executive – are obsessing over customers to provide the best possible experience. 2018 offered several new innovations on behalf of our customers. 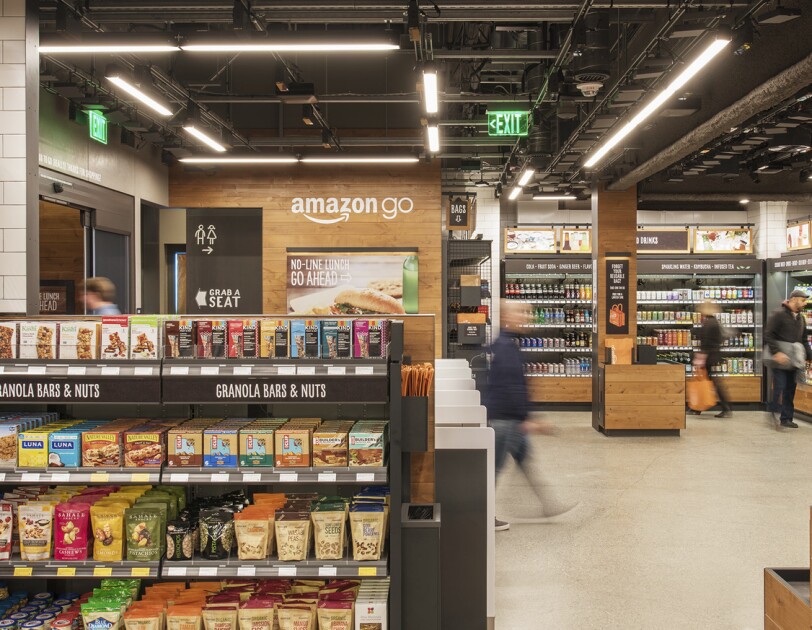 Amazon Go is a new kind of store with no checkout required. We created the world’s most advanced shopping technology so customers don’t have to wait in line. With our Just Walk Out Shopping experience, customers simply use the Amazon Go app to enter the store, take the products they want, and go. No lines, no checkout. The first Amazon Go store opened to the public on January 22, 2018 and as of December 2018 there are nine Amazon Go stores open across Seattle, Chicago, and San Francisco. Separately, on September 27, Amazon opened its first Amazon 4-star store in New York City. We built Amazon 4-star around our customers – what they're loving and what they're buying. Everything in store is rated 4 stars and above, is a top seller, or is new and trending on Amazon.com. 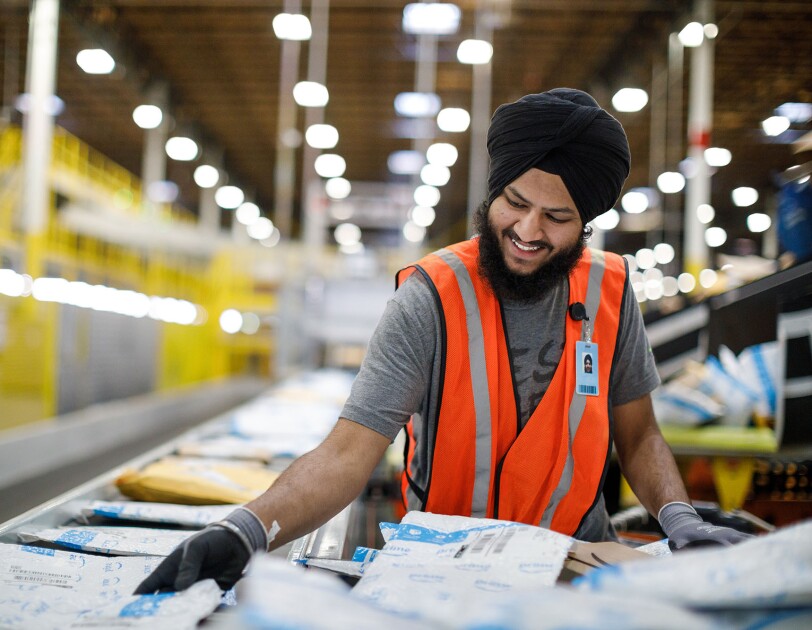 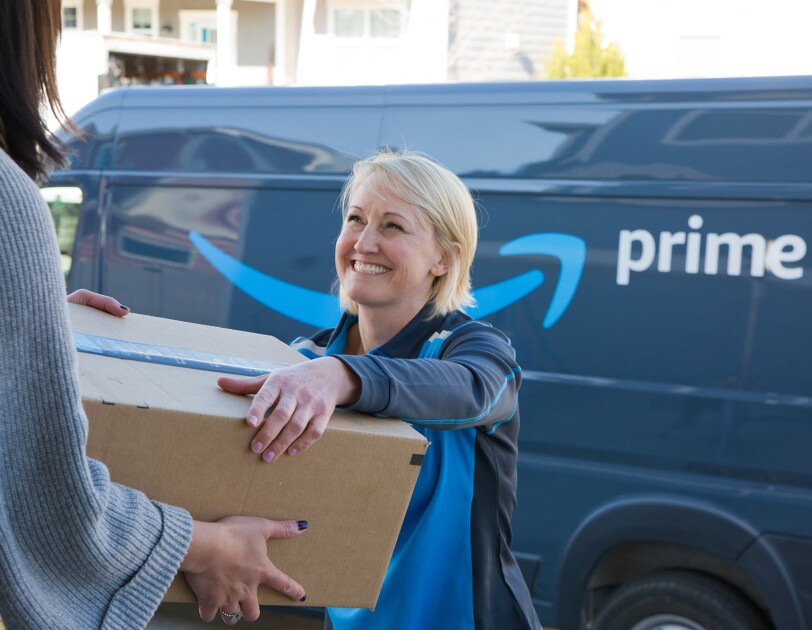 In June, Amazon announced its Delivery Service Partner (DSP) program, an offering aimed at aspiring entrepreneurs who want to build private businesses delivering Amazon packages. The DSP program offers individuals, even those with no logistics experience, an opportunity to create their own business knowing they will have delivery volume from Amazon, access to the company’s sophisticated technology, hands-on training, branded vans, and more. And in September, Amazon and Mercedes-Benz announce a partnership to supply Amazon Delivery Service Partners with delivery vans like the one pictured here. 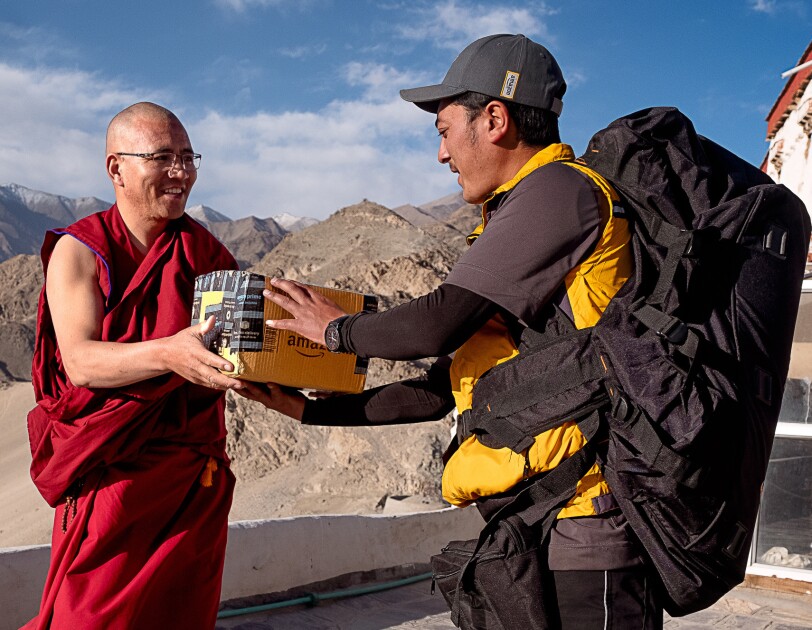 Amazon will go to all lengths (and heights) to deliver to its customers. Leh, India is a town on the fringe of modern civilization surrounded on all sides by the massive Himalaya mountain range and dotted with 17th-century palaces and monasteries. Fresh air and stunning views are in abundance, but at an elevation of roughly 11,500 feet some everyday goods can be nearly impossible to come by. Amazon set up its own delivery service in Leh by contracting with a local adventure guide company to make deliveries throughout the rugged mountain town — making it the company’s highest elevation delivery route.
Photo By Amazon 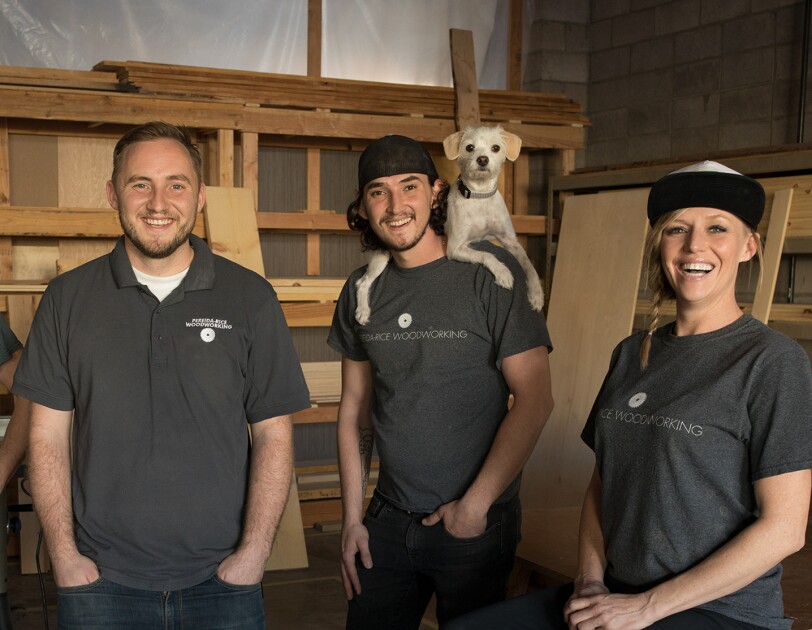 Small- and medium-sized businesses selling on Amazon.com reach millions of customers worldwide. Amazon first invited small businesses to sell on Amazon nearly two decades ago, and today, entrepreneurs, like the family members who started Pereida-Rice Woodworking pictured here, are a vital part of the company’s commitment to customers. Small businesses come from every state in the U.S. and more than 130 countries around the world. 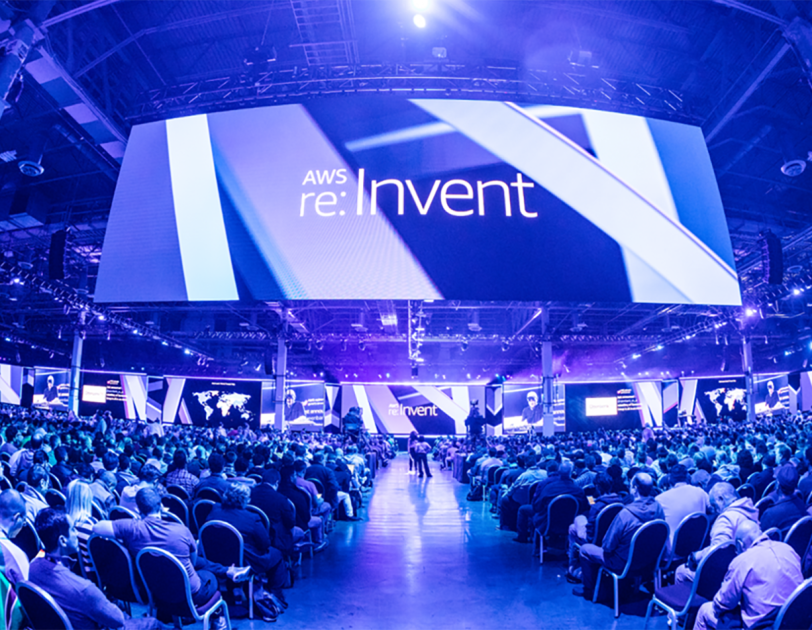 Each November, Amazon Web Services (AWS) hosts re:Invent, a global cloud computing conference featuring keynotes, product and service announcements, workshops, and hackathons that cover AWS core topics and embrace the emerging technologies the company is developing. During the week, AWS made over 100 announcements. For example, AWS announced 13 new machine learning capabilities and services, across all layers in the machine learning stack, to help put machine learning in the hands of even more developers.

This year Amazon raised its minimum wage to $15 an hour, and announced new headquarters locations. In all, Amazon now has more than 610,000 employees worldwide, including over 250,000 in North America. 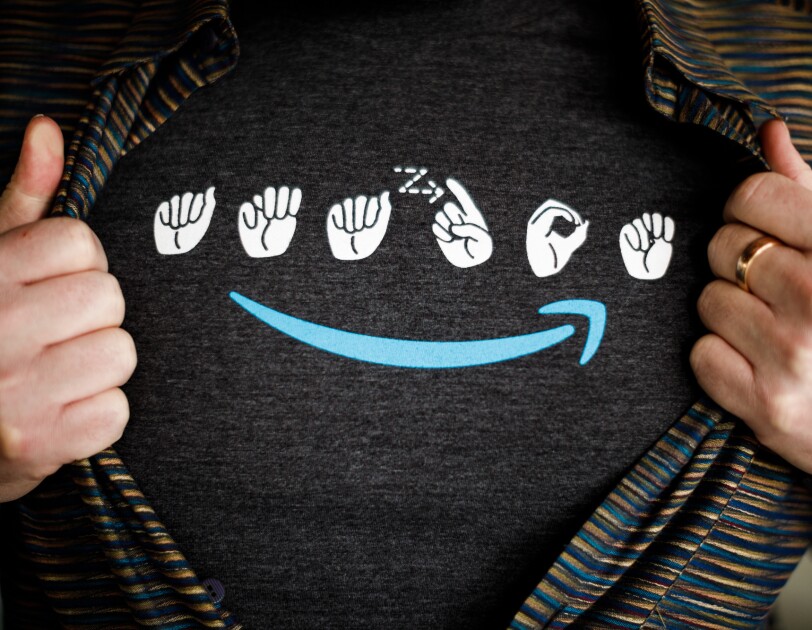 At Amazon, affinity groups are voluntary, employee-led groups that are designed to foster diversity and inclusion and to strengthen networking and community participation. In his nearly 10 years at Amazon, Brendan Gramer, a senior UX designer, helped lead efforts to connect Amazonians of all abilities by helping launch the AmazonPwD (People with Disabilities) affinity group. In April, he led the design of the Amazon ASL logo with a group of designers, accessibility leaders, and others. The team worked together to accurately illustrate the ASL handshapes and fingerspelling movement, translating it to its English letter equivalent.
Photo By JORDAN STEAD 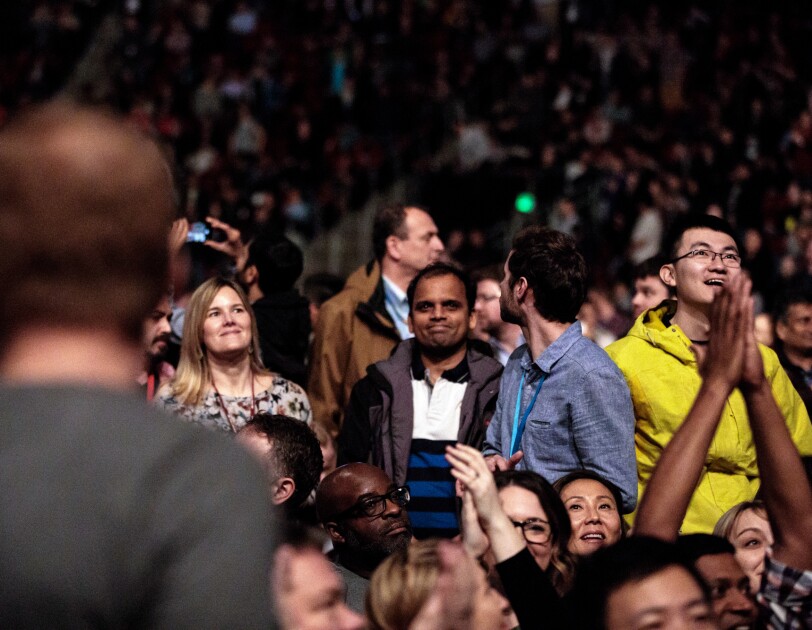 Early in the year, Amazon announced it had more than 45,000 employees working in its hometown headquarters of Seattle. Also in March, LinkedIn named Amazon the #1 business on their 2018 Top Companies list, which ranks the most sought after places to work for professionals in the United States. LinkedIn analyzed billions of actions its members took on the website over the course of the 12 months. Using metrics and data from its members, LinkedIn then interpreted what those actions meant. It funneled results into four categories which, when combined, fed into a ranking of the most sought-after companies.
Photo By JORDAN STEAD 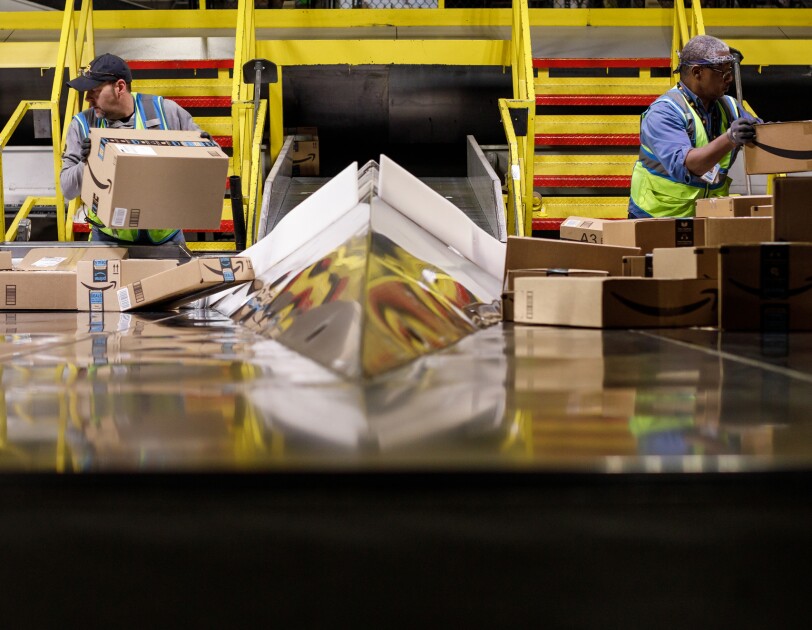 In October, Amazon announced it is increasing its minimum wage to $15 for all full-time, part-time, temporary (including those hired by agencies), and seasonal employees across the U.S. The increases took effect in November. The new Amazon $15 minimum wage applies to more than 250,000 Amazon employees, as well as over 100,000 seasonal employees who were hired at Amazon sites across the country this holiday season.
Photo By JORDAN STEAD 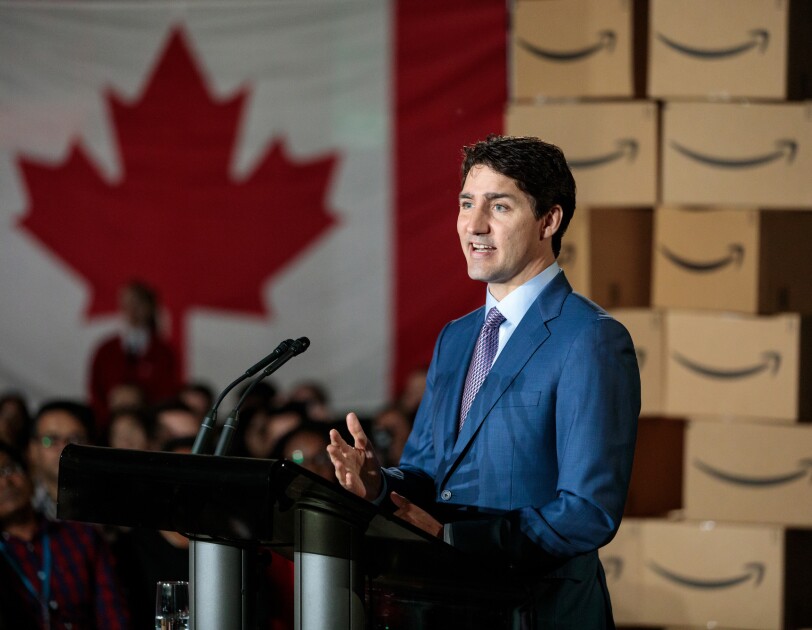 Among the many Amazon office opening and tech hub hiring announcements, Canada’s Prime Minister Justin Trudeau was on hand to share the news that Amazon will add 3,000 employees in Vancouver, Canada. The tech employees will join more than 6,000 full-time Amazonians across Canada. The biggest office opening announcement came in November when Amazon selected New York City and Northern Virginia for new headquarters. Amazon to invest $5 billion and create more than 50,000 jobs across the two new headquarters, and Nashville will become a new Operations Center of Excellence with more than 5,000 jobs.
Photo By JORDAN STEAD 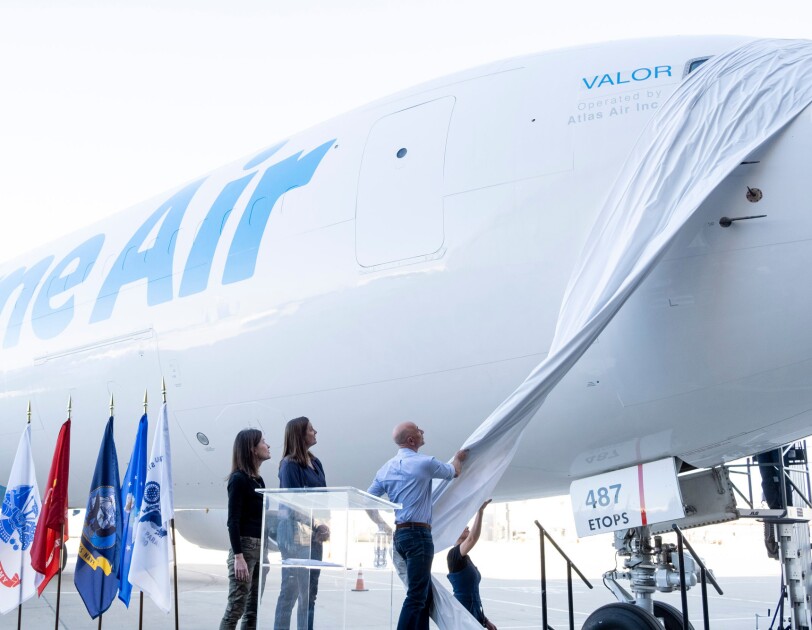 Amazon unveiled its 40th Amazon Air plane, named in honor of the Amazon military community – the 18,000 veterans, military spouses, and citizen soldiers who help Amazon deliver on behalf of customers, every day. The new aircraft is known as Valor – a name chosen by our employee affinity group Warriors@Amazon. Amazon Founder and CEO Jeff Bezos formally unveiled the aircraft at an event in Long Beach with more than 100 members of our military community. The announcement included expanding the Amazon Veteran Technical Apprenticeship program to 1,000 apprentices and broadening the program to include military spouses. 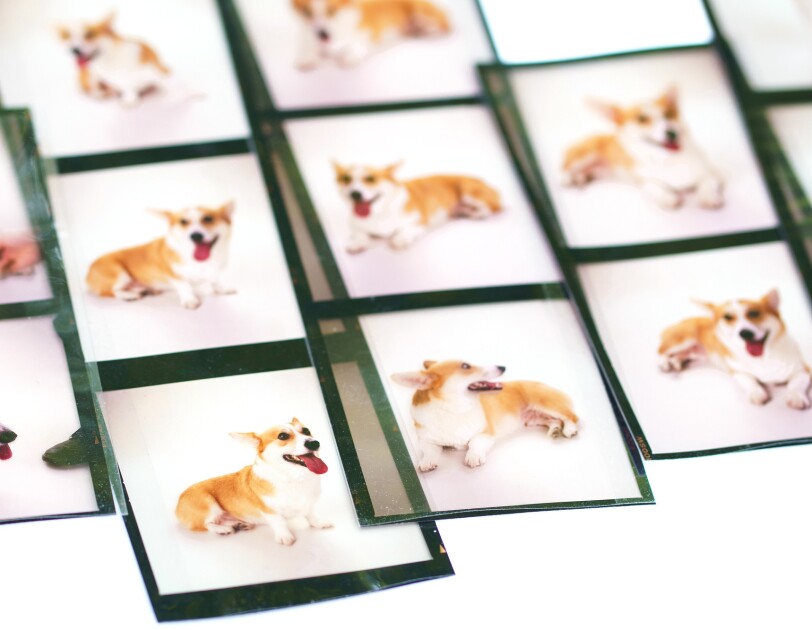 Thousands of dogs join employees at Amazon’s Seattle campus today, but back in 1996 there was only one: a Welsh corgi named Rufus who roamed the first warehouse and loved meetings. Though he passed away in 2009, his presence is still felt at the Seattle headquarters, where a building bears his name and photos mark his memory. Rufus is just one part of Amazon’s self-proclaimed peculiar culture.
Photo By JORDAN STEAD

Giving Back to Communities

All around the world, Amazon employees give back to the communities where they live and work – from making sure children have a healthy breakfast to start their school day and inspiring students to learn coding, to making it easier for to recycle. 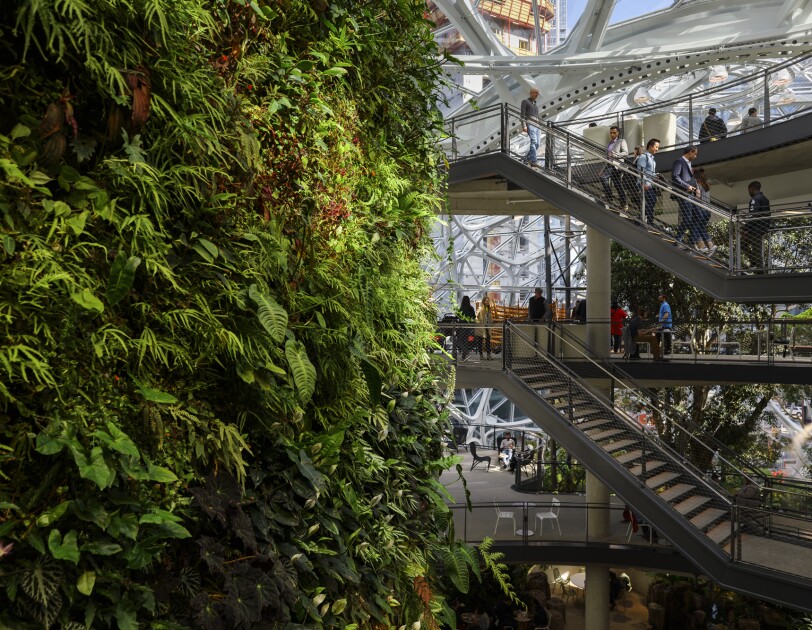 In January, 2018, The Spheres opened in Seattle. The unique structure is filled with thousands of plants from all over the world. It’s an alternative workplace for employees to use to for meeting spaces and to feel refreshed during the workday. The Spheres are open on select Saturdays each month for public visitors.
Photo By DAVE QUIGG 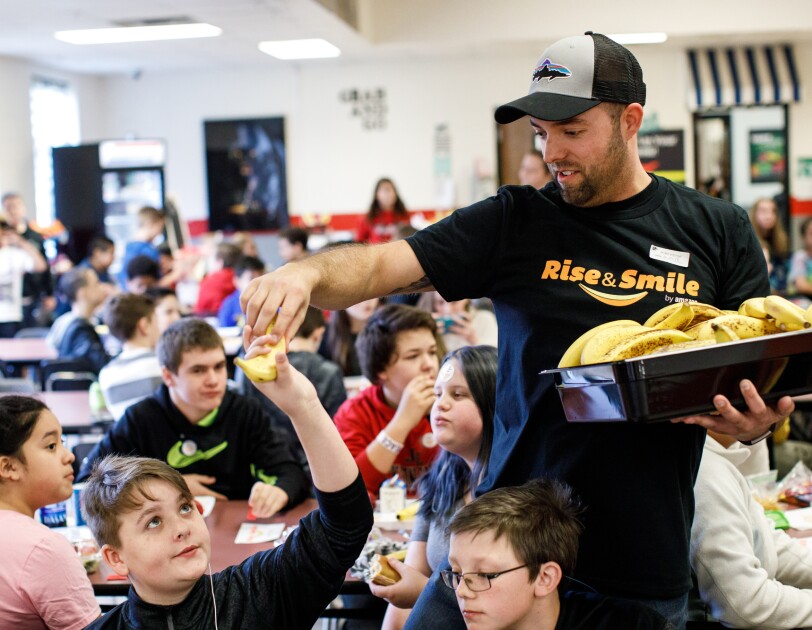 Amazon’s Rise & Smile campaign supports healthy breakfasts for students in an effort to remove a barrier to education – hunger. Through a partnership with Share Our Strength’s No Kid Hungry, the Rise & Smile campaign provided more than 130 schools with grants to help incorporate breakfast into the school day, which resulted in over 3.1 million breakfasts in the classroom for more than 29,000 students in the U.S. More than 300 Amazonians across Customer Fulfillment participated in Breakfast Bananza events to celebrate school grants by delivering bananas, engaging students in fun activities, and surprising students with prizes to emphasize the importance of eating a nutritious breakfast
Photo By JORDAN STEAD 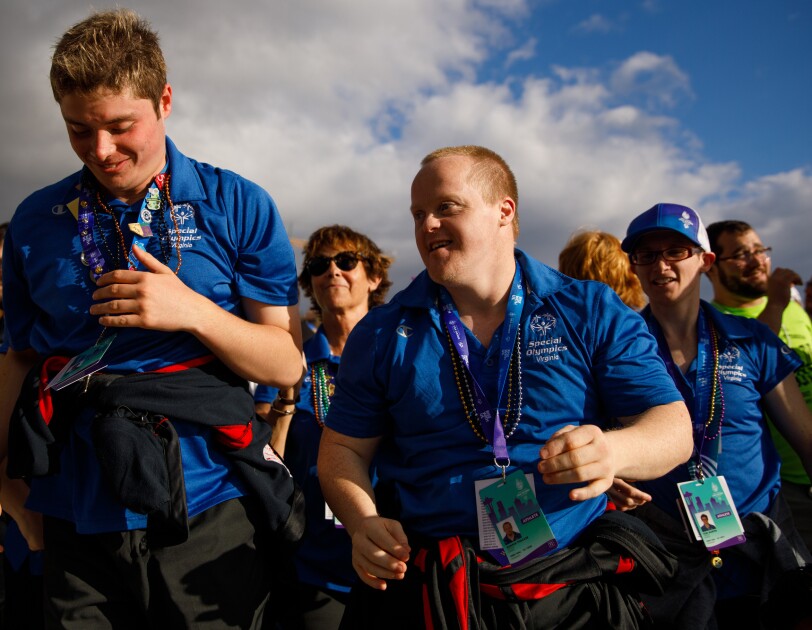 This summer, Amazon was the presenting sponsor of the Special Olympics USA Games, held in Seattle. Hundreds of Amazon volunteers attended events throughout the week, and Amazonian athlete Leonard Flowers participated in The Games in Men’s Tennis. Amazon employs people with disabilities across its entire business, from roles focused on the accessibility features of products to positions not related to accessibility, including engineering, design, product management, operations, and senior management roles.
Photo By JORDAN STEAD 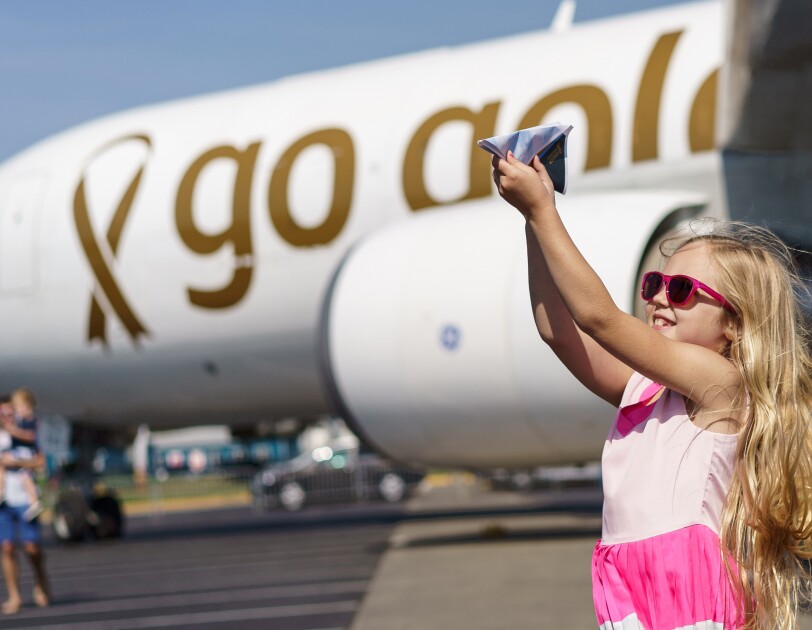 During the month of September, thousands of Amazonians across the globe joined Amazon to #GoGold for Childhood Cancer Awareness Month and helped put a spotlight on the important issues impacting children diagnosed with cancer and their families. As a part of the Amazon Goes Gold campaign, Amazon shipped millions of gold-themed boxes to customers, wrapped an Amazon Air plane in gold, and encouraged employees worldwide to join our 48 hour PJammin’ Party and more than 22 countries.
Photo By Amazon 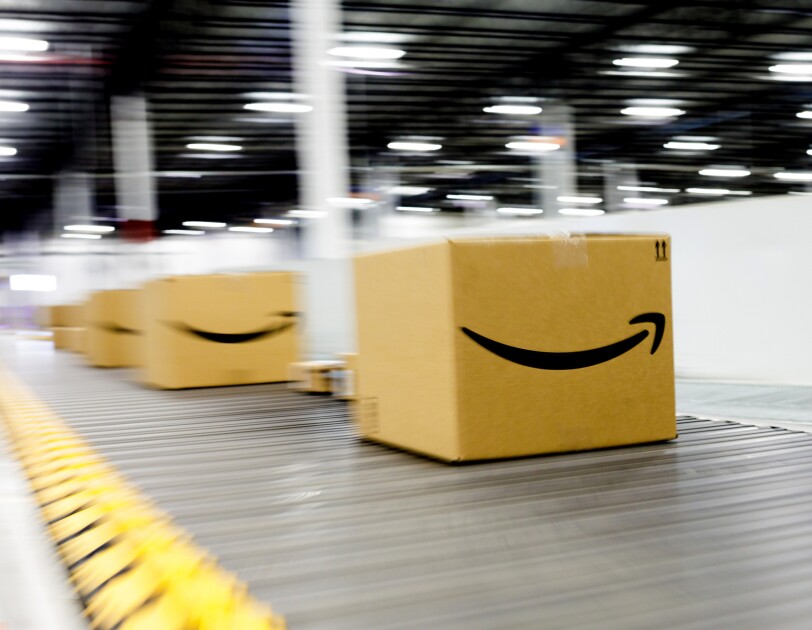 In October, Amazon announced a $10 million investment in Closed Loop Fund as part of its commitment to minimizing waste and making it easier for customers and communities to recycle. Over the next 10 years, Amazon’s investment will increase the availability of curbside recycling for 3 million homes in communities across the country, diverting 1 million tons of recyclable material from landfill and eliminating the equivalent of 2 million metric tons of carbon dioxide. This initiative adds to Amazon’s waste reduction efforts, including its Frustration-Free Packaging program that has eliminated over 500 million boxes and more than 244,000 tons of packaging materials over the last 10 years.
Photo By JORDAN STEAD 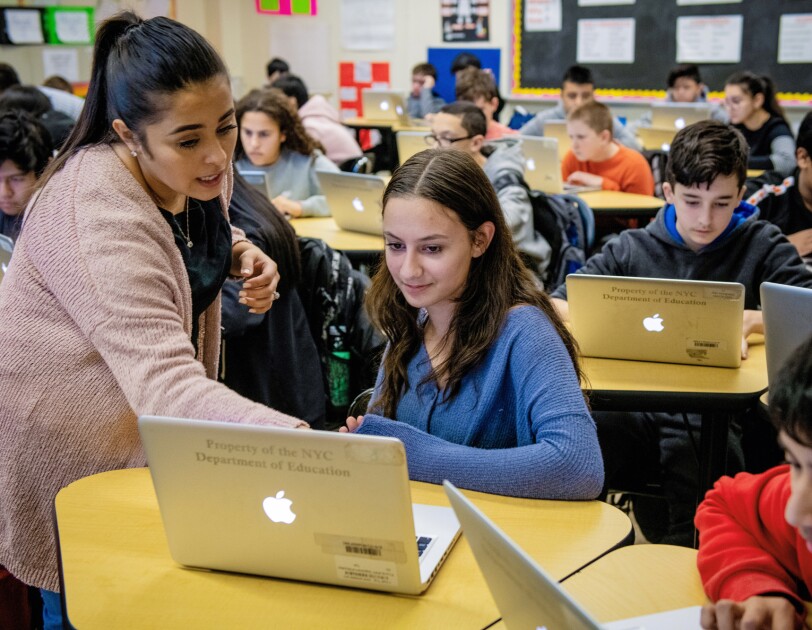 Amazon Future Engineer (AFE) aims to inspire more than 10 million kids per year to explore computer science through coding camps, classes, college scholarships, and internships. That includes funding both introductory and advanced placement high school courses for more than 100,000 underprivileged youths in 2,000 low-income high schools across the U.S. For kids from kindergarten through eighth grade who live in communities currently underrepresented in tech, Amazon is funding online lessons and camps through partnerships with organizations such as Code.org and Coding with Kids. AFE joined Code.org recently in hosting Hour of Code, a global movement that extends to tens of millions of students in more than 180 countries. During the Hour of Code, kids across the world are invited to try their hand at coding for just one hour, using tutorials that are available in more than 45 languages. And, throughout the year, Amazon Fulfillment hosted 15 Camp Amazon events for a half-day immersion experience in science, technology, engineering, and math activities.
Amazon StoriesCommunityEventsPartnershipWorking at AmazonSustainabilityJob creation and investmentSmall business OperationsFulfillment center
How did you like this story?
Yawn
It's OK
It's good
It's great
I love it!
113 Ratings
Thanks!
Working at Amazon

How much does Amazon love dogs? Just ask one of the 7,000 pups that “work” here.
Continue Reading
Company news

Over the course of a year, the Day One blog captures moments that add up to tell the larger story of Amazon’s connection with its customers, employees, and communities around the world.
Continue Reading
Company news

A peek into the Amazon founder and CEO's visit to India in January 2020.
Continue Reading
The Australia bushfire crisis
What Amazon is doing for support organizations on
the frontline of the Australian bushfire crisis, and how you can help.
See how you can help
close
Out for Delivery
Get the best of the Amazon blog, including the latest news, top stories you may have missed, and editor's picks, delivered right to your inbox.
Sign Up