Where a holiday job can lead

Amazon will hire more than 100,000 seasonal employees this year. Fourteen years ago, Josh Teeter was one of them.
By Meg Coyle

Working at Amazon is a lot like riding a motorcycle for Josh Teeter. Twist the throttle, and you’re instantly in control of a journey that’s often just as rewarding as the destination.

Teeter started his Amazon journey in 2004, as a seasonal employee at a warehouse — also known as a fulfillment center — outside of Reno, Nevada. He had just left the U.S. Army, where he served for eight years and was thinking about what to do next. He joined Amazon at the height of the holiday shopping season, known to associates as “Peak.”

“It’s such a busy time with so many more orders coming in and packages going out," he said. "It’s daunting work, unlike anything I’d ever done before."

It wasn’t long before Teeter realized he was a part of something big. “It was super interesting to me because of all the innovation we were doing,” he said. “We were making people’s lives easier. We were making things faster for them. At that point, I started to understand that this company is doing something really interesting, and I wanted to be a part of it. So much has changed since I started, but the one thing that has remained constant is the ability to give our customers what they need when they need it."

There’s a sense of satisfaction knowing that you’re having an impact on people’s lives.

Amazon will hire over 100,000 seasonal employees at sites across the country during this year's Peak. For some, it’s a short-term opportunity. Thousands of others will go on to full-time roles. Ninety percent of associates across our U.S. fulfillment network are regular, full-time employees.

After working the holiday season in 2004, Teeter accepted a full-time position to become an area manager, responsible for teams receiving inbound packages and placing them into inventory. His roles and responsibilities continued to grow, and today he is a director of operations, overseeing several Amazon fulfillment centers across the country.

One of his highlights: mentoring associates and leaders as they create their own career paths. “There’s a sense of satisfaction knowing that you’re having an impact on people’s lives,” Teeter said. “Giving them advice on how to be bigger leaders, on how to lead people in a way that makes their associates happy; it’s one of the things I’m super proud of.”

Teeter was also an early advocate for the development of Amazon’s Career Choice program, which pre-pays 95 percent of tuition and fees for the company’s fulfillment center associates pursuing coursework in high-demand occupations. “Career Choice is one of those ways where they can come into the company for a little while, learn a new skill, and then go do something else. It benefits them, it benefits their family, and it also helps the community.”

For Teeter, the journey continues — fueled by opportunity, innovation, and a customer-centric mission. “It’s something that will keep me going for a long time.” 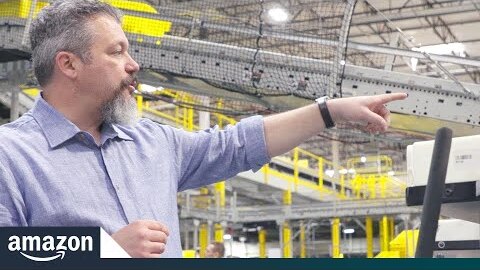 From seasonal job to Amazon leader