What a longtime Amazonian told his daughter before her Amazon interview

SPOILER: He shared the same advice he'd given to strangers - a key tip for anyone aspiring to work at Amazon.
By Dave Quigg

Four summers ago, Tina Barr visited her parents leading up to her day of job interviews at Amazon. "She was asking 'So what are the secrets? What do I need to do to get ready?'" said Tina's father, Jeff Barr, who's been an Amazonian since 2002. "I just said to study the Leadership Principles. And my wife said, 'Well, no, no, no. She's your daughter. Give her the secret stuff.'"

Jeff and Tina laugh about the moment now — partly because Tina's career path since then has made her an expert on how true her dad's next words to her mom were. "I said there really isn't any secret," Jeff said. "You need to be sure you can express yourself in terms of the Leadership Principles. If they resonate with you, and if you can express yourself in those terms, you're probably going to have a pretty good day of interviews here." 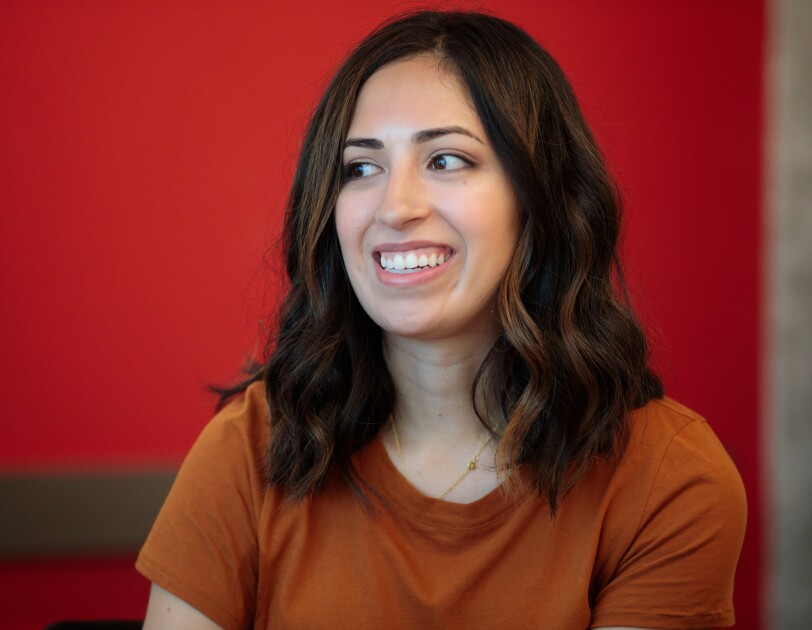 Tina Barr has been an Amazonian since August 2015.
Photo By JORDAN STEAD 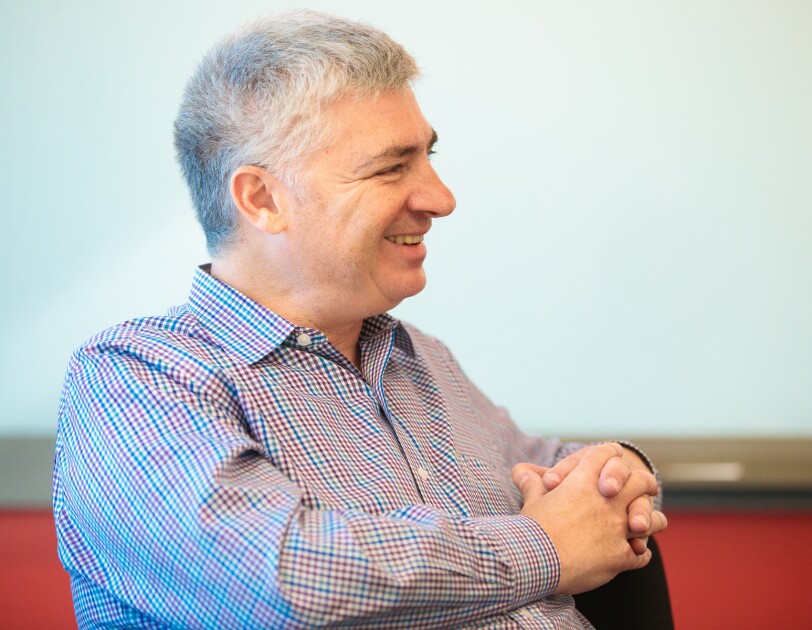 AWS Chief Evangelist Jeff Barr has been an Amazonian since 2002.
Photo By JORDAN STEAD 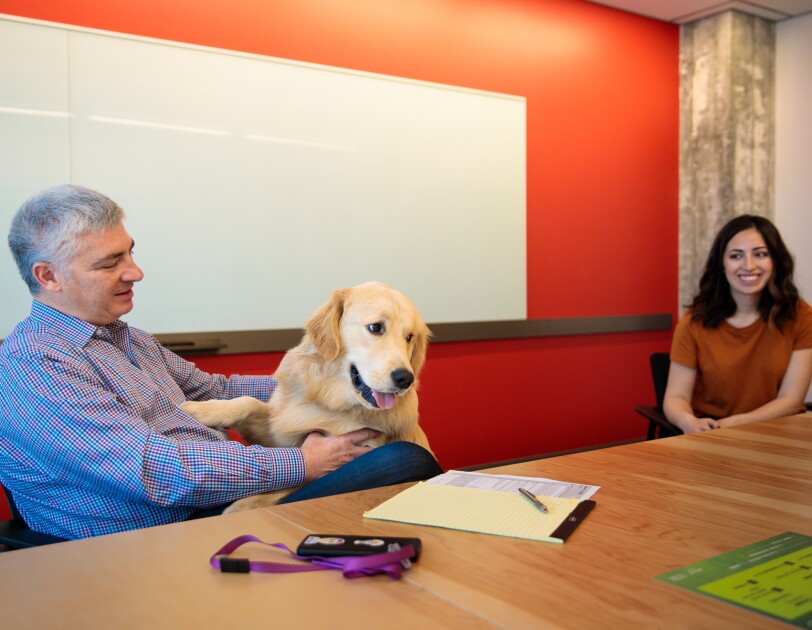 Thanks to Amazon's dog-friendly culture, Tina is able to bring her dog, Carlos, to work with her.
Photo By JORDAN STEAD 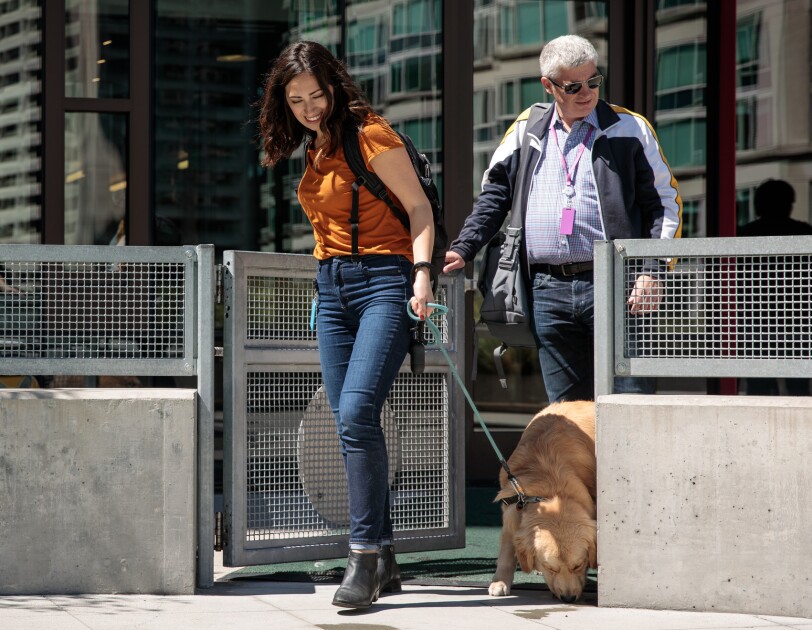 The Barrs lead Carlos inside the dog park.
Photo By JORDAN STEAD 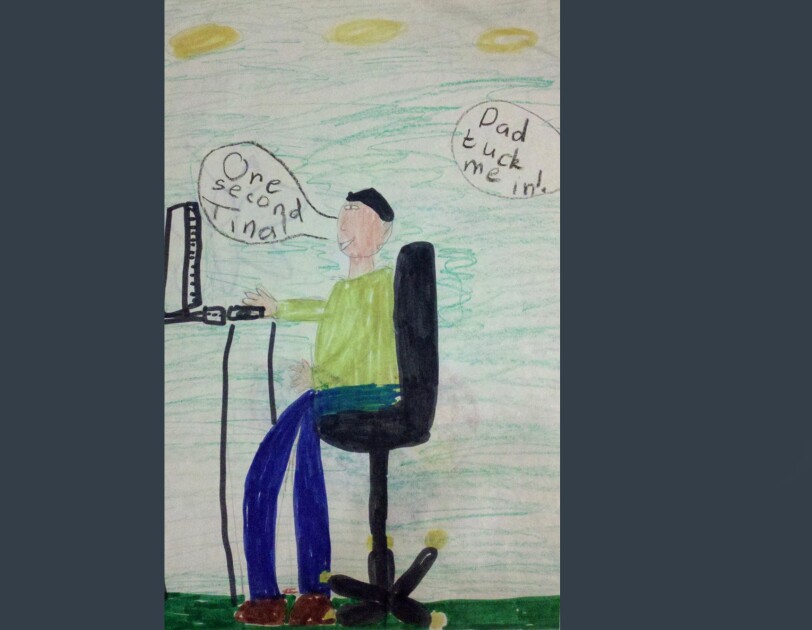 A Tina Barr original from the Barr family archives. Tina grew up knowing Jeff found his work interesting — and that she could count on him to come tuck her in at bedtime.

Growing up, even though her dad's passion for his work was obvious to her, Tina hadn't ever pictured herself wanting a job at Amazon. "I never was interested in tech," she said. "I originally went to school for journalism, and then I ended up switching to community health."

She joined AmeriCorps after college and was working for a non-profit north of Seattle when she realized that the pace was all wrong for her. It felt like she was in the same meeting every week and that nothing ever changed. It was pretty much the opposite of what she knew of Amazon, where a bias-for-action culture drives progress. She wondered for the first time if she might enjoy working there. Not long after, she applied for a job on Amazon's recruiting team.

Tina had seen her dad offer advice and encouragement to job-seekers curious about Amazon, even literal strangers who knew his face from his highly visible work as the chief evangelist for Amazon Web Services (AWS) and approached him on the street. Now that she was the one hoping for a job at Amazon, she did what the gregarious strangers had done, picked her dad's brain, and got his standard-issue advice on how crucial the Leadership Principles would be to her day of job interviews.

"I had a piece of paper with every LP," Tina said. "And I would do the STAR method - Situation Task Action Results. It's just a way to share stories so it's easy to understand. I wrote out all of my stories that I could think of from school and from work."

A few days after her interviews, she was driving home from her non-profit job when she got a call from Amazon. She listened, said thank you, said goodbye, hung up, and screamed. Then she called to tell her dad that she, too, was going to be an Amazonian. "I remember him saying he had tears in his eyes. He was just so excited."

"It was mostly knowing that there was a lot in store for her," Jeff said. "There are so many ways to make a good career here, just so many different options."

Tina is now a recruiter for AWS, and like her dad, she talks to job candidates a lot.

"I prep them for their interviews, and I always say, 'The Leadership Principles are the most important thing. Make sure you read through them. They're not just something that's up on our website. You actually live them at work.'"

Leaders start with the customer and work backwards. They work vigorously to earn and keep customer trust. Although leaders pay attention to competitors, they obsess over customers.

Leaders are owners. They think long term and don't sacrifice long-term value for short-term results. They act on behalf of the entire company, beyond just their own team. They never say “that's not my job.”

Leaders expect and require innovation and invention from their teams and always find ways to simplify. They are externally aware, look for new ideas from everywhere, and are not limited by “not invented here.” As we do new things, we accept that we may be misunderstood for long periods of time.

Are Right, A Lot

Leaders are right a lot. They have strong judgment and good instincts. They seek diverse perspectives and work to disconfirm their beliefs.

Learn and Be Curious

Leaders are never done learning and always seek to improve themselves. They are curious about new possibilities and act to explore them.

Hire and Develop the Best

Leaders raise the performance bar with every hire and promotion. They recognize exceptional talent, and willingly move them throughout the organization. Leaders develop leaders and take seriously their role in coaching others. We work on behalf of our people to invent mechanisms for development like Career Choice.

Insist on the Highest Standards

Leaders have relentlessly high standards — many people may think these standards are unreasonably high. Leaders are continually raising the bar and drive their teams to deliver high quality products, services, and processes. Leaders ensure that defects do not get sent down the line and that problems are fixed so they stay fixed.

Thinking small is a self-fulfilling prophecy. Leaders create and communicate a bold direction that inspires results. They think differently and look around corners for ways to serve customers.

Speed matters in business. Many decisions and actions are reversible and do not need extensive study. We value calculated risk taking.

Accomplish more with less. Constraints breed resourcefulness, self-sufficiency and invention. There are no extra points for growing headcount, budget size, or fixed expense.

Leaders listen attentively, speak candidly, and treat others respectfully. They are vocally self-critical, even when doing so is awkward or embarrassing. Leaders do not believe their or their team's body odor smells of perfume. They benchmark themselves and their teams against the best.

Leaders operate at all levels, stay connected to the details, audit frequently, and are skeptical when metrics and anecdote differ. No task is beneath them.

Have Backbone; Disagree and Commit

Leaders are obligated to respectfully challenge decisions when they disagree, even when doing so is uncomfortable or exhausting. Leaders have conviction and are tenacious. They do not compromise for the sake of social cohesion. Once a decision is determined, they commit wholly.

Leaders focus on the key inputs for their business and deliver them with the right quality and in a timely fashion. Despite setbacks, they rise to the occasion and never settle.

Reflecting on resistance—51 years ago, and today

Honoring Black activists and leaders who "gave us freedom to love so loudly today."
Continue Reading
Working at Amazon

As the country grapples to overcome ongoing racial injustices, reflecting upon Juneteenth feels especially poignant this year. We've come a long way, but still have a long way to go.
Continue Reading
Amazon responds to COVID‑19
How we're supporting our employees, customers, and communities
Learn More