See how the holiday rush is a moment to shine

Why the holiday season means peak excitement for Amazon fulfillment center employees.
By Day One Staff

Lots of people spend the holidays furiously shopping for the best deals. But that's not the only mad rush during the period leading up to Black Friday and running through Christmas. Heath Ruder and his team inside a huge Amazon fulfillment center spend their holidays trying to get the maximum number of gifts to customers and fast.

"My building is the flagship of fulfillment and we always want to make sure that we're competing as best as we can every year," said Ruder. "Our goal this year is to ship more than one million units in a 24-hour period."

In fact, the Kent, Washington, fulfillment center where Ruder works is one of only two in North America to ship more than one million items in a single day during the 2016 holiday season which Amazon associates simply refer to as "Peak."

You're just on this adrenaline high, you're going out, you're getting the customer shipments and you're just happy.

During last year's Peak, more than a billion items were shipped worldwide. On Cyber Monday of last year, for example, Amazon customers purchased about 46 electronics per second, and 36 toys per second, while shopping on a mobile device. December 19, 2016 was Amazon's top worldwide shipping day. The record for most successful last-minute Christmas shopper went to a Prime member in Richmond, Virginia, who received a pair of Venum Contender Boxing Gloves in just four hours on Christmas Eve. In order to deliver on such a massive scale, this year Amazon announced it is hiring for over 120,000 additional jobs in its U.S. fulfillment network.

"Getting these customer orders out, even to their family members who are overseas, in battle zones, it's a huge sense of accomplishment and a huge pride that I take," said Vincent Gardner, an area manager in Amazon's Kent fulfillment center. "When you come in on those big volume days, everyone is in this weird ecstatic mode. Let's go out and accomplish it!"

How much does Amazon love dogs? Just ask one of the 7,000 pups that “work” here.
Continue Reading
Operations

Amazon will convert 125,000 of the 175,000 temporary roles hired since March to permanent jobs if employees would like to stay at Amazon long term.
Continue Reading
Company news

Update on how we’re protecting employees 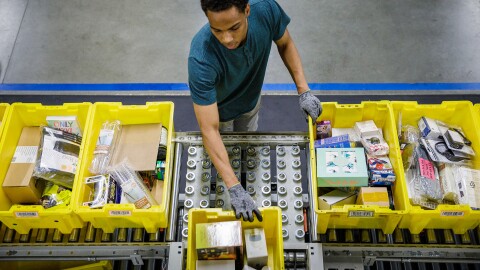 Their pride and teamwork get holiday gifts to customers