People behind the Amazon smile

Meet a few of the hundreds of thousands of employees who spend their days figuring out ways to make Amazon customers' lives easier.
By Day One Staff

About six years ago, the Tierce family moved from central California to Joint Base Lewis-McChord in Washington state. Sabrina's husband, Joshua, is a U.S. Army medic. She was nervous about finding a job with some flexibility because her daughter is diabetic.

"If I got a phone call from the school saying her blood sugar is high or low, I'd have to put everything on hold and leave immediately," Tierce said. "That was hindering me from getting a job, until I saw an ad from Amazon about working from home. The customer service position involved taking phone calls that were routed to you personally. It was amazing that this was even a possibility."

Amazon's Virtual Customer Service centers support customers around the globe who are using Amazon's websites, shopping apps, and digital products such as Kindle, Echo, and Alexa. Tierce is now a customer service team lead with Amazon, managing 18 customer service associates who also work from their homes in several states across the country.

In addition to being available to help her daughter if needed, Tierce enjoys other benefits of working from home for Amazon. "Being a military spouse can be sometimes a little isolating," Tierce added. "I have a bond with my customers. I'm making a new friend every time I take a phone call."

The greater value, she said, is the peace of mind her husband has because the family has a stable, secondary income. If they need to relocate for the military, she could work from home for Amazon in another state.

There is another advantage to her job. "My commute is about 15 paces," she joked. "The worst part of my day is if there's a Lego on the stairway because that's a rough commute to work."

Soon after getting his college degree in management information systems, Moustafa Ghazal landed a job with Amazon. He hesitated for a moment before accepting the offer though because it meant moving from his family home in California to Seattle.

"My family is really close. My brother and I played a lot of video games together and my sister and I were best friends growing up," Ghazal said. "My parents, who were engineers, were full supporters of 'go do what you want to do' and Amazon was a huge opportunity, so they encouraged me to move to Washington to tackle this job."

Amazon has over 40,000 employees at corporate offices and fulfillment centers in its home state.

Ghazal joined the company in a technical role and has since moved to a project management position where he collaborates with hundreds of engineers across the company. He's one of the many employees making sure Amazon's websites are always up and running for customers. They're all driven by making sure customers have positive experiences every time they order something from Amazon.

"I work with a bunch of brilliant minds. They're all full of energy and every single day I'm learning a lot," he said. "There's not a single day that goes by without learning something new."

Jillian Bowman took a job in an Amazon fulfillment center to help pay for her education.

She recalled a daily routine of walking around a massive warehouse, locating the right shelf, finding or "picking" an item to fulfill customers' orders, likely climbing a ladder to reach it, then walking back to her station to package it for shipping. She soon discovered Amazon wasn't a typical warehouse workplace, and there was a lot of room for advancement in the company.

A couple of years later, the now 22-year-old is testing some of the company's newest robotics and automation. Bowman works with engineers and operations to train associates on new technologies developed for Amazon fulfillment centers.

Tasks that can be done in a predictable, controlled way are automated, she said, allowing people to do more engaging assignments that require judgment and more interaction with co-workers.

"A really good day for me is training associates in something new, and then seeing their faces at the end of the day when they say, 'wow, my job is so much easier and it's so much more fun than it was before,'" she said.

Many of the jobs Amazon will create over the next 18 months will be in new fulfillment centers currently under construction in Texas, California, Florida, and New Jersey.

"Something I've always wanted to do is impact the lives of others," Bowman added. "Now I see that I'm able to do that through technology which brings people closer together and puts them in more interesting, critical roles."

Today, Amazon offices around the world are filled with door desks, based on Bezos’ early design.
Continue Reading
Amazon responds to COVID‑19
How we’re supporting our employees, customers, and communities
Learn More
X
Out for Delivery
Thank you!
Please try again
Quick news and rich insights from inside Amazon, delivered directly to your inbox every few weeks.
Check your inbox shortly for your very first Out for Delivery email. We’ll reach out every few weeks with more.
If you’re not redirected back to the blog in a few seconds, click here.
Looks like we had some trouble authenticating your entry. Let’s try again...
Amazon Privacy Policy | Opt-out Anytime
Return to video player ➡ 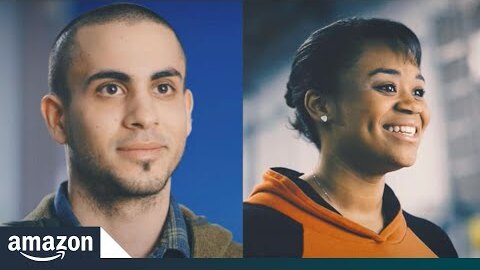 Stories about the people behind Amazon