Amazon pays for classes so employees can pursue careers in high-demand fields like aerospace.
By Neal Karlinsky

It’s hard to tell which is louder, the buzz of machines inside a Dallas classroom or the chatter of excited students who have job offers waiting for them as soon as they graduate. 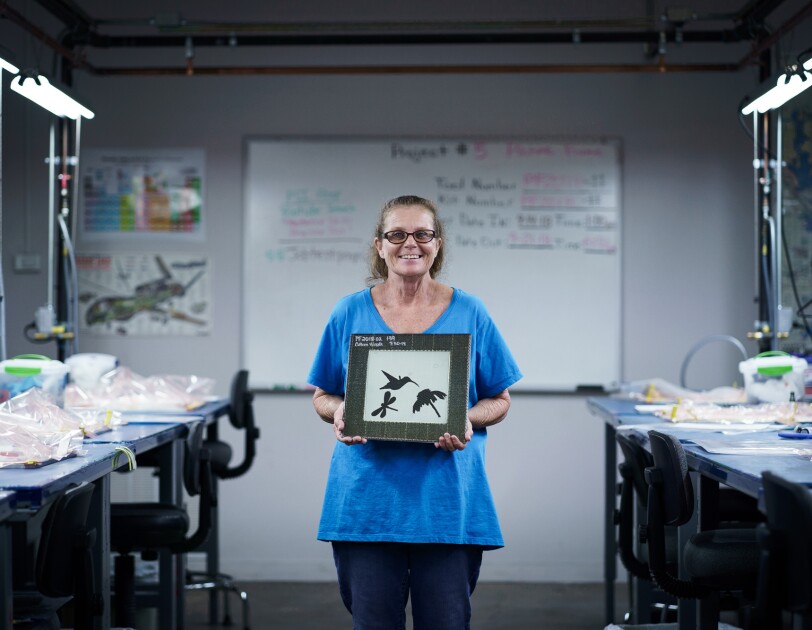 Colleen Woods shows off an early project from her Career Choice class, a picture frame made from the same carbon fiber used in aerospace manufacturing.
Photo By JORDAN STEAD 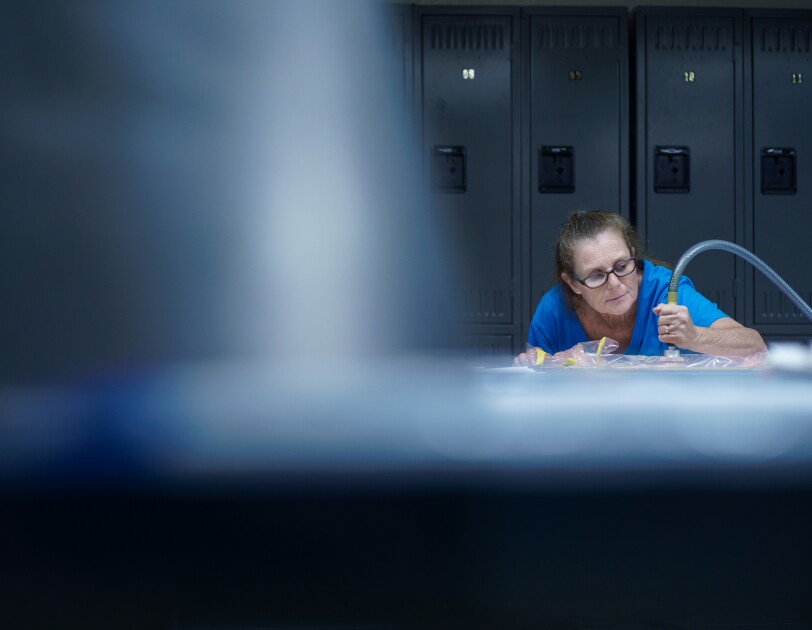 Woods fills a vacuum bag as part of the process of working with aerospace materials.
Photo By JORDAN STEAD 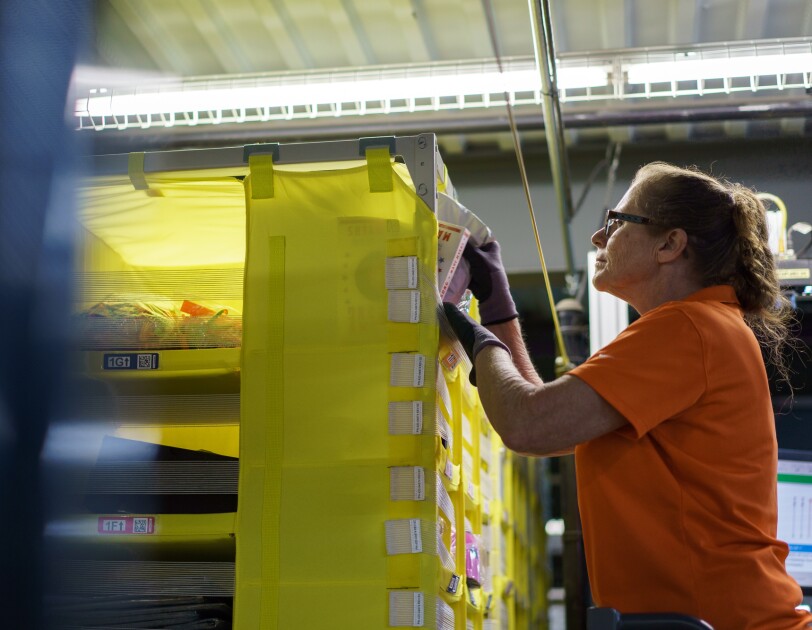 Woods on the job at Amazon.
Photo By JORDAN STEAD 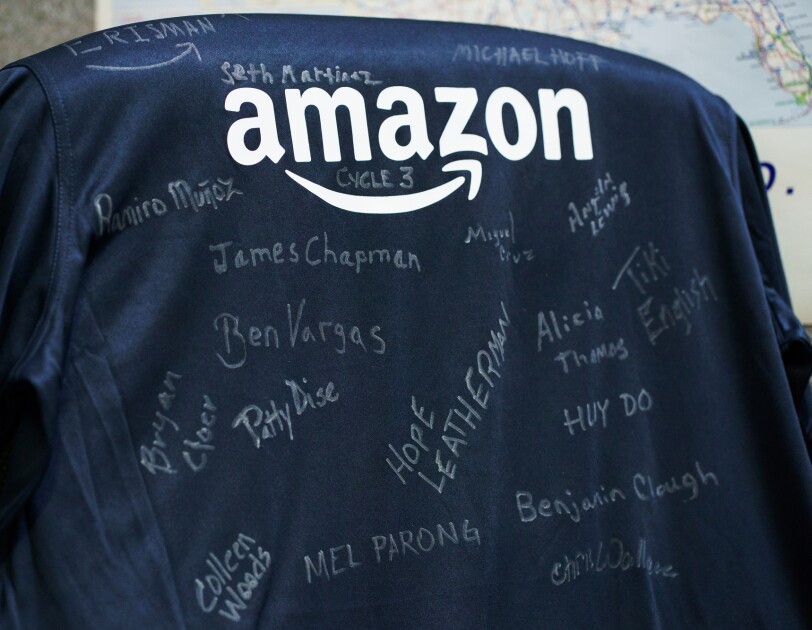 Woods and the other Amazonians in her group of Career Choice students surprised their instructor with an autographed shirt.
Photo By JORDAN STEAD

Community Learning Center, an adult education school, is among the latest to partner with Amazon in an effort to give warehouse employees added skills to use towards a new career.

“Working in an Amazon fulfillment center can be an entry level job, and we're in a period of time where there's a lot of debate about how to create a path from an entry level job to the middle class,” said Ardine Williams, vice president of Amazon Human Resources. “If we can provide these classes as a perk to our associates, it sets us apart as an employer, it contributes back to the community, and it also puts people on that path to a career.”

After three years delivering customer orders inside one of Amazon’s Dallas fulfillment centers, Colleen Woods said it was time to make a change. Amazon’s Career Choice program offered her an opportunity to further her education in a new field – aerospace manufacturing, a career in heavy demand in Dallas-Fort Worth. And Amazon picked up most of the tab.

Through Career Choice, Amazon pre-pays up to 95 percent of tuition and fees towards a certificate or associate’s degree in fields ranging from IT and computer science to healthcare and transportation. Most of the time, Amazon employees don’t pay anything. The idea is to put people on a path towards in-demand professions, while making it easy on them by offering classes inside their workplace.

“I barely had to pay out of pocket. My portion was $150. That’s it,” said Woods, a recent graduate of a class teaching aerospace manufacturing skills. The training included specific technical instruction and work with carbon fiber.

Amazon tailored Career Choice to the area where Woods lives, focusing on skills that are most needed by the region’s employers.

If we can provide these classes as a perk to our associates, it sets us apart as an employer, it contributes back to the community, and it also puts people on that path to a career.

“One in six jobs in the Dallas-Fort Worth area is in aerospace,” Williams said. “We worked with two community colleges and brought the program in-house. We make it available for associates who are working both the day shift and the night shift to train as advanced airframe mechanics.”

Woods calls the result “life-changing.” She has a higher paying job with a Dallas aerospace company. Nearly all of her Amazon classmates received immediate job offers as well.

“Amazon made that happen for me,” said Woods, who acknowledged she couldn’t have afforded to take the classes necessary to obtain that job without Career Choice. “I’m so excited about it!”

Neal Karlinsky is a storyteller for Amazon & Senior Content Creator. He also loves eating chips.
How did you like this story?
Yawn
It's OK
It's good
It's great
I love it!
406 Ratings
Thanks!
Working at Amazon

Discover our peculiar interview ways, what to expect, and how to prepare.
Continue Reading
Working at Amazon

Today, Amazon offices around the world are filled with door desks, based on Bezos’ early design.
Continue Reading
Community

The inaugural Amazon Future Engineer scholarships support college-bound seniors in underrepresented and underserved communities.
Continue Reading
The Australia bushfire crisis
What Amazon is doing for support organizations on
the frontline of the Australian bushfire crisis, and how you can help.
See how you can help
close
Out for Delivery
Get the best of the Amazon blog, including the latest news, top stories you may have missed, and editor's picks, delivered right to your inbox.
Sign Up
Return to video player ➡
Watch now