Never one for the status quo, Julius Yu is most comfortable when he’s pushed outside his comfort zone. Five and a half years in the Army gave him that in spades.

At just 23 years old, Yu led a high-profile, high-risk operation in support of U.S. military efforts in Iraq in 2015. “As a young leader, you’re always trained to lead service members at that pinnacle moment. Experiencing that and having that real-world impact was a crucible moment for me,” Yu said.

He continued to climb the ranks. In 2016, Yu was selected for the U.S. Army’s Special Operations unit. Not long after, he began to crave a different challenge – one that would again push him into unfamiliar territory. Only this time, outside the military. After researching companies, Amazon seemed like the perfect fit.

“Leaving the Army was one of the hardest decisions I’ve ever had to make,” said Yu. “But I saw Amazon as this fast-growing company with huge opportunity, and I wanted to take that leap.”

Yu began his transition to civilian life by participating in a 12-week internship at Amazon’s fulfillment center in Denver, Colorado through the Hiring our Heroes initiative. “I was able to test drive the company and learn the fundamentals,” he said.

Next, he enrolled in Amazon’s Military Leaders Program (MLP), which fast-tracks top military talent for operations leadership positions. It launched in January 2017 and is similar to the Amazon’s Pathways program for graduates with MBAs. Former nuclear submarine officer Rachel Lessard developed the MLP and recruits other highly-specialized veterans to the program.

“We look for people who’ve led large teams in complex environments and have bias for action to come up with enough of the solution to move forward.” said Lessard.

Amazon’s culture and complexity resonated with Yu. “I saw an opportunity to develop personally and be part of a team focused on a different kind of mission – delivering to our customers.”

I saw an opportunity to develop personally and be part of a team focused on a different kind of mission – delivering to our customers.

Yu started in the MLP in January 2018 as an Area Manager at the same Denver fulfillment center. He coordinates inbound shipments, manages inventory, and leads a team of 37 associates who are looking for ways to drive efficiencies and problem-solve on behalf of customers. “You get to see the action live and upfront as an area manager and experience that head-on rather than from a distance,” he said.

The Military Leaders Program puts him on an accelerated path to a general manager position at one of Amazon’s fulfillment centers within five years. Yu is one of thousands of veterans hired as part of Amazon’s Joining Forces initiative, which is ahead of pace to hire 25 thousand veterans and military spouses by 2021.

“I want to be able to represent the military well, that’s the biggest thing," Yu added. “I want to bring the lessons learned in the military to Amazon operations and represent all the other military veterans out there who are transitioning from active duty to the civilian world.”

Meg Coyle is a recovering journalist, wife, mom, animal lover and storyteller.
How did you like this story?
Yawn
It's OK
It's good
It's great
I love it!
198 Ratings
Thanks!
Working at Amazon

Discover our peculiar interview ways, what to expect, and how to prepare.
Continue Reading
Working at Amazon

Today, Amazon offices around the world are filled with door desks, based on Bezos’ early design.
Continue Reading
The Australia bushfire crisis
What Amazon is doing for support organizations on
the frontline of the Australian bushfire crisis, and how you can help.
See how you can help
X
Out for Delivery
Thank you!
Please try again
Quick news and rich insights from inside Amazon, delivered directly to your inbox every few weeks.
Check your inbox shortly for your very first Out for Delivery email. We’ll reach out every few weeks with more.
If you’re not redirected back to the blog in a few seconds, click here.
Looks like we had some trouble authenticating your entry. Let’s try again...
Amazon Privacy Policy | Opt-out Anytime
Return to video player ➡ 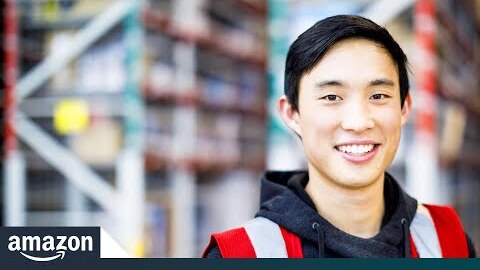 From special ops to Amazon operations