The journey from refugee to successful business owner

These siblings revitalized their dad's legacy.
By Dave Quigg

Le Duc Nguyen knew he'd survive. This was a recession, and it was bad. His business was struggling. But life had thrown worse at him. He'd flown wartime helicopter missions for the South Vietnam Air Force. He'd prayed his way through years as a prisoner of war. He'd fled to the seas with his wife and his kids and a boatload of other refugees who wanted out of their country once Saigon fell and the Americans left.

The Nguyens made it to Hong Kong and then to Los Angeles. In California, Le's weeks had no weekends. He worked his way from being a salesman to running his own chain of furniture stores to owning a mattress factory.

He hated the thought of laying off employees that had been with him from the very start. This is when we kids got involved in the business.

The factory's success put all seven Nguyen children through college. Le was living his American dream. So by 2009, when the recession was pummeling his mattress business, he had a lot to lose. And while he was confident that he'd survive, he didn't want to survive by shrinking his workforce.

"He hated the thought of laying off employees that had been with him from the very start," says his son Vy. "This is when we kids got involved in the business."

Vy hadn't worked at the factory since he was a teenager. Back then, he grabbed mattresses off the end of the assembly line and wrestled them into plastic bags for delivery to all the little local stores that bought them wholesale and sold them to the public. Now, in the depths of the recession, Vy and his siblings believed they could revive the family business, Brentwood Home, by using the Internet to sell their mattresses directly to customers all over the country. Le gave his kids the go-ahead.

Vy says, "We tried several online channels and our own website. Within the first year, we realized that the Amazon model worked best for us." Since almost anyone can register to sell on Amazon, there were no barriers between the Nguyens and customers. "It allowed us to focus on making great mattresses and not spend all our resources building an online store."

Amazon customers played the crucial role in the successes that followed. Even though the Nguyens offer a 120-day in-home trial, it's a leap of faith to buy a mattress online. "The only thing customers have to go on is the community feedback, how other customers rate it," Vy says. "People were really happy with the product. I think that's what opened the eyes of a lot of other customers."

In the recession, especially, it helped that Le had always run a lean operation focused on making affordable mattresses. But as time passed and the economy got better, Vy says Amazon customers taught him something unexpected: They didn't just want the least expensive mattress; they'd gladly pay more for a better mattress, just as long as it was a great value. So that's where Vy and his siblings steered the business. The family factory in Pico Rivera, California, is producing mattresses with materials like bamboo and organic latex.

Today, the Nguyens employ about 120 people. That's three times more than in the bleakest days of the recession. Looking at what his kids are achieving, Le says, "I'm proud of them. They did better than me."

For his part, Vy is grateful for the way America rewarded his father's hard work and bold initiative when their family needed a new start in the world. "That's the most amazing part of the story," he says.

Amazon Marketplace SellersFulfillment by AmazonAmazon StoriesTwo minutes
About the Author

Before joining the Amazon Stories team in 2012, Dave Quigg’s jobs included newspaper reporter, blogger, writing tutor, and stay-at-home dad.
How did you like this story?
Yawn
It's OK
It's good
It's great
I love it!
Thanks!
Working at Amazon

Discover our peculiar interview ways, what to expect, and how to prepare.
Continue Reading
Sustainability

From the lab to the fulfillment center, employees contributed to the innovations behind a mailer that can be recycled in the same bin as Amazon’s iconic box.
Continue Reading
The Australia bushfire crisis
What Amazon is doing for support organizations on
the frontline of the Australian bushfire crisis, and how you can help.
See how you can help
close
Out for Delivery
Get the best of the Amazon blog, including the latest news, top stories you may have missed, and editor's picks, delivered right to your inbox.
Sign Up
Return to video player ➡ 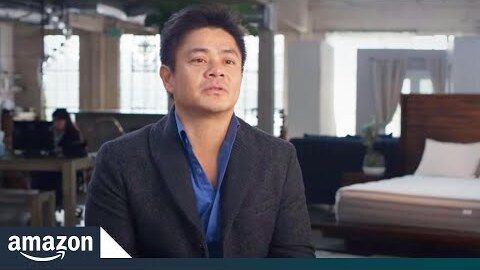 The journey from refugees to successful entrepreneurs