Recipes from her mother’s kitchen inspire a Chicago entrepreneur

Footnanny products reach customers around the world.
By Day One Staff

Growing up in her childhood home with three brothers, Gloria L. Williams naturally became close to her mother and grandmother who were known for their massages and homemade lotions.

Back in the day, she said, her mother and grandmother combined a little bit of castor oil, lemon and orange in a pot and warmed it up on the stove. Decades later, Williams has her own line of foot creams and products, inspired by the recipes she learned as a child.

Everyone thought I would become a nurse and take care of people. As it turns out, I am taking care of people around the world, but in a very different way.

"I've always been attracted to helping people because that's what I saw the strong women in my life model for me. I knew early on that the human touch was healing and has a profound effect on a person's state of mind and health," Williams said. "Everyone thought I would become a nurse and take care of people. As it turns out, I am taking care of people around the world, but in a very different way."

For 20 years, Williams ran her own business providing manicures and pedicures. The quality of her work helped her land a job – one day a week – serving as the onset nail technician with HARPO Studios in Chicago. Three years into her role, Oprah Winfrey sat down in her chair for a foot massage. "I had no clue what was about to happen to my life," Williams recalled.

Ms. Winfrey tweeted a video of Williams preparing for the massage. At the time, she was wearing a bright green footnanny.com T-shirt.

"That was just the beginning," she said. "Ms. Winfrey helped me to think bigger and pursue my greatest goals." Today, Williams is CEO of the growing company she founded, featuring products that are formulated with essential compounds of soy, shea and cocoa butter to be smooth and not too oily. The foot creams are offered in a range of scents including lavender and chocolate.

Footnanny products reach customers around the world, with distribution support from Fulfillment by Amazon, and have once again earned a spot on the annual holiday list of "Oprah's Favorite Things." The list, now in its 20th year, describes a trio of Footnanny products Ms. Winfrey recommends this way:

Everybody loves the smell of clean. How they got it in a bottle, I'll never know. The linen scent of this shower gel, hand soap, and lotion developed by Gloria Williams, a.k.a. the Footnanny, reminds me of slipping between freshly laundered sheets.

"This is an honor to be included on the list again," Williams said. "It makes me feel like I've done something that my grandmother passed to my mother, then passed to me, and now I'm able to pass it to the world. I'm very grateful and fortunate."

At our Amazon Accelerate seller conference, we announced that we'll invest a record $18 billion in 2020 to help independent sellers succeed in our store. It's a win-win partnership—Amazon's success is the success of American small businesses.
Continue Reading
Small business 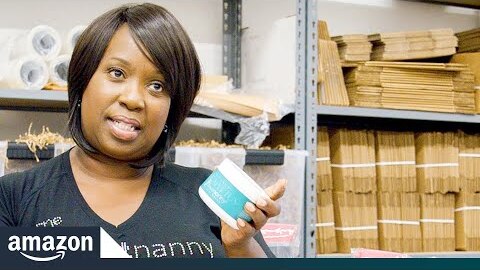 How the Footnanny earned a spot on Oprah's Favorite Things list