Lighting a path to success

How a small business owner is empowering girls to become leaders.
By Meg Coyle

The glow of a candle was an everyday presence in Sejal Parag's childhood home. Her mother lit one each evening to signal the end of a day, a time to reflect and relax.

When Parag started her own family, candle-making became a hobby. Then, in 2015, she saw an opportunity to leave her job at an education non-profit and go into business for herself selling her hand-poured, soy-based scented candles.

“I realized that good, premium candles weren’t affordable, so I sought to make something that people could afford," she said. "I started KarmaLit so I could be home with my kids and have that flexibility to pick them up from school and take them to the zoo."

Parag sells her candles on Amazon Handmade. As sales grew, so did the need for additional help. She hired three high-school students to set the wicks, apply the labels, and help with packaging and shipping. But it’s a job that goes beyond the practical. For Parag, it’s designed to be inspirational.

“We get to show them what it’s like to run a small business. They get to see hands-on what’s possible,” she said.

Sixteen-year-old Lauren White comes to work in Parag’s Denver home studio after school and gets to experience a growing business from the inside. “Sejal is a complete role model as I’m seeing her build KarmaLit and surrounding me is her success,” White said. “Because if I want to do something like this, I have the resources, I have the tools, and I’ve been able to see that as KarmaLit.”

We get to show them what it’s like to run a small business. They get to see hands-on what’s possible.

Parag created custom scents for her candles, like “favorite hoody,” “blue jeans,” and “cozy nights.” While each scent is designed to evoke feelings of comfort and familiarity, every candle sold delivers something else: Parag said she donates a portion of sales to schools. “When we first started we thought, ‘let’s give back to education,’” Parag said.

Kristina McCombie’s kindergarten class in a public school near Denver needed wireless headphones for the tablets they use for math and reading enrichment. KarmaLit’s donation helped secure 10 pairs. “For my students at five and six years old, it shows them that there’s a lot of good in the world and people who want to see them succeed with their education,” said McCombie.

“Today we’re a company that reaches people all across the world,” said Parag. “We’re still excited to learn, still excited to grow, and hopefully we can continue to inspire the next generation of business leaders.”

Half the items sold on Amazon worldwide are from small and medium-sized businesses, like KarmaLit. We celebrate Sejal Parag’s success and the achievements of many others on International Women’s Day (March 8) – a global day celebrating the social, economic, cultural, and political achievements of women.

Meg Coyle is a recovering journalist, wife, mom, animal lover and storyteller.
How did you like this story?
Yawn
It's OK
It's good
It's great
I love it!
146 Ratings
Thanks!
Small business

How a partnership between Amazon and a local delivery service brought 7,000 bagels, 1,000 popsicles, and other delicious treats to employees.
Continue Reading
Small business

Recipes from her mother’s kitchen inspire a Chicago entrepreneur

Footnanny products reach customers around the world and earned a spot on “Oprah’s Favorite Things.”
Continue Reading
The Australia bushfire crisis
What Amazon is doing for support organizations on
the frontline of the Australian bushfire crisis, and how you can help.
See how you can help
X
Out for Delivery
Thank you!
Please try again
Quick news and rich insights from inside Amazon, delivered directly to your inbox every few weeks.
Check your inbox shortly for your very first Out for Delivery email. We’ll reach out every few weeks with more.
If you’re not redirected back to the blog in a few seconds, click here.
Looks like we had some trouble authenticating your entry. Let’s try again...
Amazon Privacy Policy | Opt-out Anytime
Return to video player ➡ 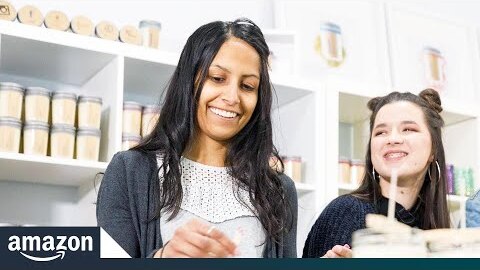