What a teenage survivor wants you to know about cancer

The Amazon Goes Gold campaign is all about raising awareness of childhood cancer. We asked an Amazonian and his daughter to share what they learned about facing a grim diagnosis and how people who want to help can make a difference.
By Dave Quigg
Because Sequoia White is better now, and because we know her story is happy and hopeful again, we can brace ourselves and actually hear what she wants us to know about what it's like to be a teenager facing cancer, what it's like to nearly die because of a bad reaction to the chemo that's supposed to cure you, and how anyone who cares can deliver everyday kindnesses that lift up a family slogging through a health crisis.

Only a couple of months before everything went wrong for Sequoia, her dad – Kevin White – started a new job as an Amazon warehouse manager. He and his family live near San Antonio, and the job was more than four hours up the interstate in a suburb of Dallas, so everyone was still adjusting to Kevin being away for days at a time when Sequoia was blindsided. She went from being an honors student and avid, active volleyball player to developing unexplained neck stiffness and needing to sleep all the time.

Sequoia's mom was scared. So was Kevin. But "I even remember telling my wife 'There's no way this is cancer. That's not a thing. She's so healthy. She's so strong.'"

"When I was diagnosed, I was honestly in a total state of shock," Sequoia said. "Then I was just crying for days. It was probably five solid days of tears. It was really hard because I had never heard anything about cancer treatment. I didn't know what the survival rates were. So I was like, 'I'm going to die.'"

Still new on the job, Kevin didn't know what to expect from work during this crisis. "From the moment it happened, it was nothing but support from the team around me," he said. That gave him the peace of mind he needed. "My wife was a teacher, and she had to quit her job to take care of Sequoia, so we lost that income."

Benefits start on the first day of work for Amazon employees, and Kevin's have proved vital. "Sequoia has never been denied treatment or medication through our insurance, no matter the cost," he said. "We have never had to worry about our coverage. We've been able to focus on getting Sequoia what she needs."

Leading cause of death

More than 300,000 children are diagnosed with cancer each year. It's the leading cause of death for children and adolescents worldwide.

With support from his general manager, Kevin was able to transfer to a warehouse close to home in the San Antonio area—the SAT1 fulfillment center in Schertz, Texas. He remembers the freeing words of his new boss: "If you have to leave, just leave, and we'll figure it out until you get back."

Sequoia's ordeal, unfortunately, meant there were times when he did need to make fast, unplanned departures from work.

"I had an allergic reaction to a chemo medicine that I was getting," Sequoia said. "It gave me pancreatitis. Then I became septic and went into multi-system organ failure."

She spent nearly three months in intensive care. Sequoia remembers an especially grueling day when she decided to take a nap, but ended up slipping into a coma. Her parents have told her what happened. This is the only part of her story she struggled to tell during an interview this month.

"Doctors told my parents 'Bring your family. Say goodbye to her. She's not going to make it through the night.'" Sequoia's words trailed off. "I'm sorry. I'm getting choked up. People in our community got together, and they did a big balloon release and prayer service for me. The next morning is the day I woke up from my 30-day coma and, to the surprise of many doctors and nurses, came off the ventilator. And then I was just going up from there."

75% of families with a child with cancer will have at least one parent who needs to cut back on work or stop working.

83% of families with a child with cancer will experience some level of financial hardship.

Kevin and Sequoia believe this is a key part of her story to share. After all, it's possible to look at her now—her hair grown back, her energy and even athleticism returning—and imagine that cancer treatment works beautifully and that research dollars aren't needed. "But some of the drugs and the chemo that they use are very, very harsh," Kevin said. "I just don't think there's enough research into how it affects kids—because they're little, and they're going to have the health effects of these heavy treatments for the rest of their life. As a parent going through all that, it's frustrating because you don't want them to deviate from the protocol, but this stuff makes your kid so sick."

Kevin has been thrilled to see the push to raise awareness about childhood cancer through the Amazon Goes Gold campaign. During the month of September, Amazon will be shipping customer orders in custom-themed packaging with gold ribbons – the international symbol of childhood cancer. The company is also donating more than $4 million to support the work of the American Childhood Cancer Organization, Children’s Oncology Group, Seattle Children’s Hospital, the European Society for Pediatric Oncology, and St. Jude Children’s Research Hospital. Amazonians across the globe will show their support by wearing pajamas to work in solidarity with children who often spend years living in their pajamas during treatment and recovery from cancer.

Sequoia looks back on her experience with deep gratitude for everyone who helped her and her family: people who dropped off meals, people who drove her younger brothers to school and sports practices when her parents couldn't leave her side, friends who skipped a party or a football game to watch a movie with her. "Even someone letting you know that they're praying for you and they're thinking about you, it makes a big difference," she said. 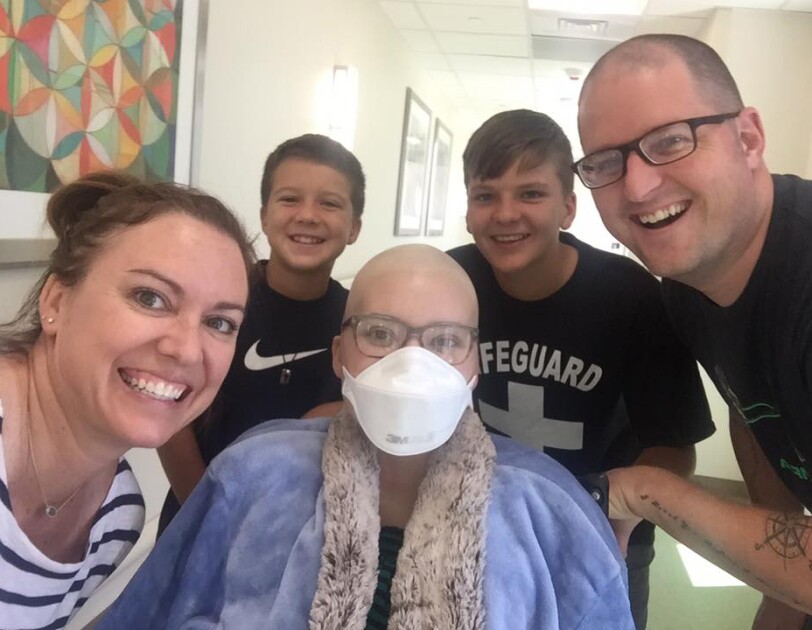 Sequoia White in the hospital with her mother, brothers, and father.
Photo courtesy of Kevin White 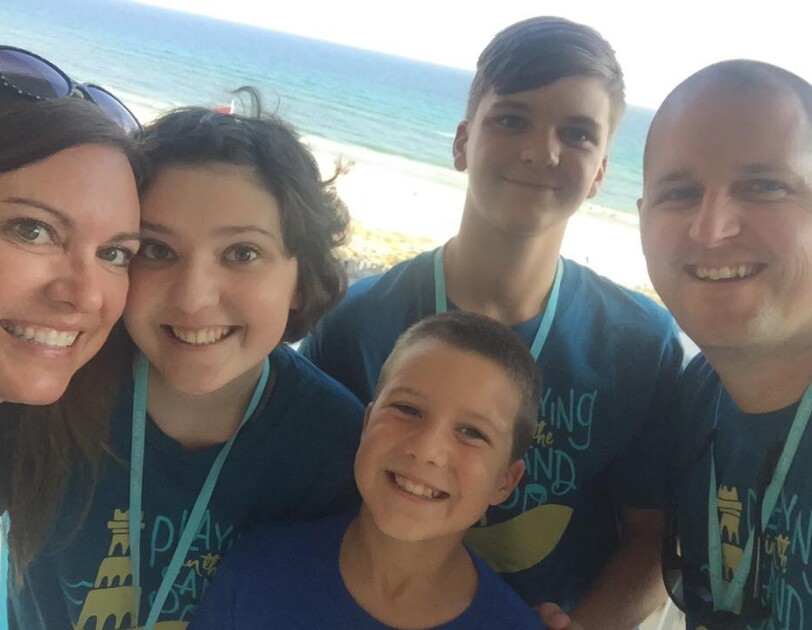 The family together as Sequoia got better.
Photo courtesy of Kevin White 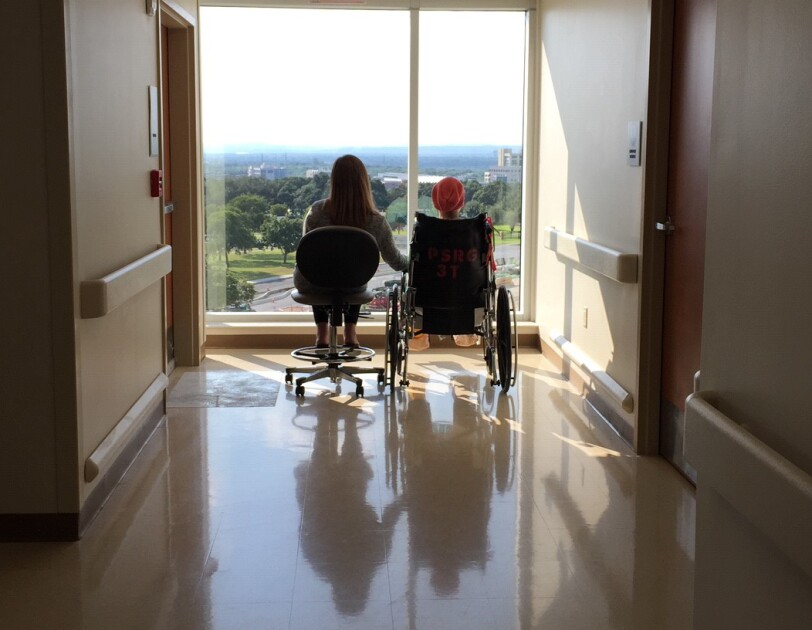 Sequoia and her mom, Naomi, look out from the hospital.
Photo courtesy of Kevin White
Her mother gave her the gift of never letting go of the idea that she might still have a future. "My mom and I would spend time researching colleges. That really helped me to see that cancer wasn't going to be my whole life. The college search was a way of telling myself 'You're going to have a different life past this. You're going to get through it.'"


Sequoia also got to feel the power of becoming a helper while she was still a patient. As she and her mom got to know other families coming for five-day-a-week chemo treatments, they learned what a hardship it can be for people driving long distances to simply keep their cars fueled up. So they made some T-shirts, sold them as a fundraiser, and used the proceeds to buy gas cards, which they handed out to families in the oncologist's waiting room.

Meanwhile, Sequoia has recently been released from the care of surgeons who treated her for one of the lingering effects of her illness: tissue death in her foot. She spent about a year in a wheelchair. Now, she's walking again and working up to being able to run.

Off at Baylor University now to start her freshman year of college, she'll be returning home to San Antonio once a month for low-dose chemotherapy and an immunity boosting treatment. She plans to major in biology, with the goal of going to medical school. "I was interested in medicine before all this happened, but I've pretty much lived in doctor's offices the past few years, and that has just made me love it even more. Not really as a patient. But I want to be able to help people like I've been helped."

Find out more about the organizations Amazon Goes Gold is partnering with this year, and how you can get involved.
Go GoldChildhood cancerAmazon StoriesOperations
About the Author

#GoGold takes to the skies

"These people are my family"

More than a job, a manager finds an extended family through her Amazon co-workers after her daughter’s cancer diagnosis.
Continue Reading
Community

5 things you should know about Amazon and why we #GoGold

Learn more about ACCO and Amazon's donation to the organization.
Continue Reading
Amazon responds to COVID‑19
How we're supporting our employees, customers, and communities
Learn More