Mahammud Hirsi works to connect cultures inside and outside Amazon warehouses.
By Meg Coyle

With its tea shops, Halal groceries, and storefronts showcasing traditional African clothing, Minneapolis’ Cedar Riverside neighborhood feels like home to Somalis and other East Africans. Known as “Little Mogadishu,” history and heritage are represented here. For Mahammud Hirsi, who immigrated to the United States from Somalia in 2009, Little Mogadishu keeps him connected to his roots.

“It’s not easy to move to a new country. But here you have the support and understanding of a community which makes it much easier to integrate,” Hirsi said. 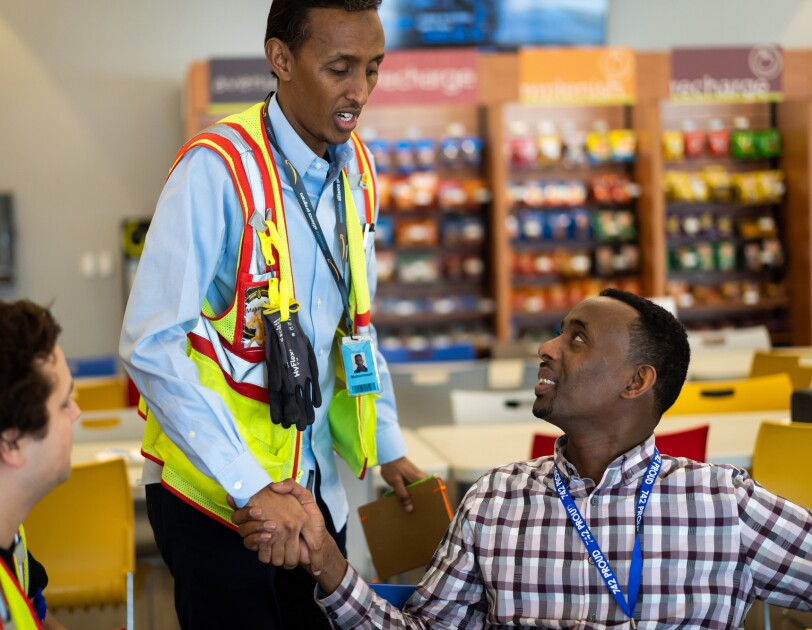 Mahammud Hirsi visits with a new employee at the Amazon fulfillment center in Shakopee, Minnesota.
Photo By JORDAN STEAD 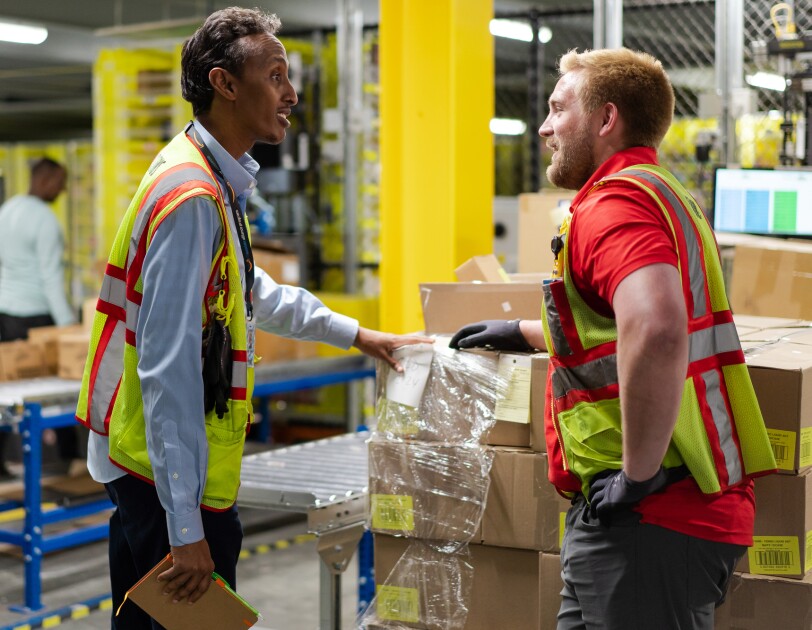 Hirsi gets an update from a fellow area manager.
Photo By JORDAN STEAD 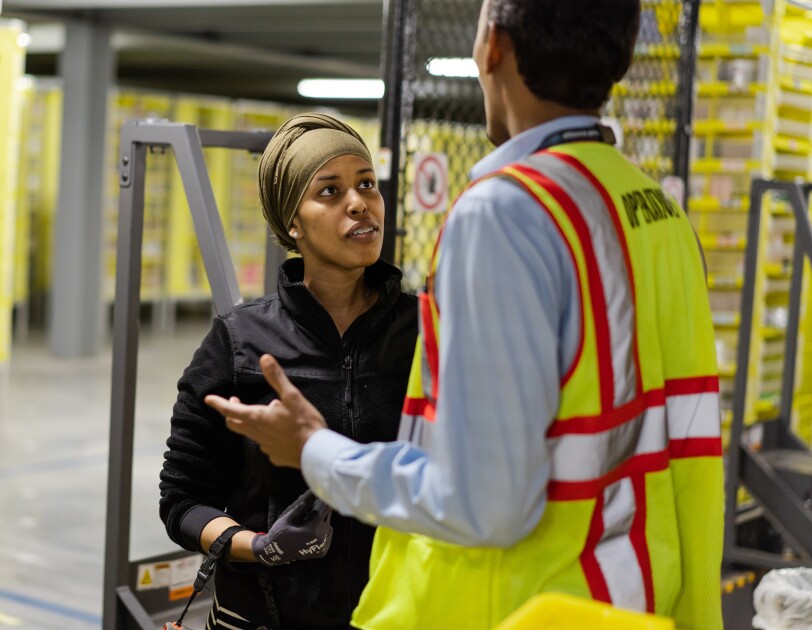 Hirsi meets with an Amazon associate. A big part of his job is to ensure all associates feel supported at work.
Photo By JORDAN STEAD 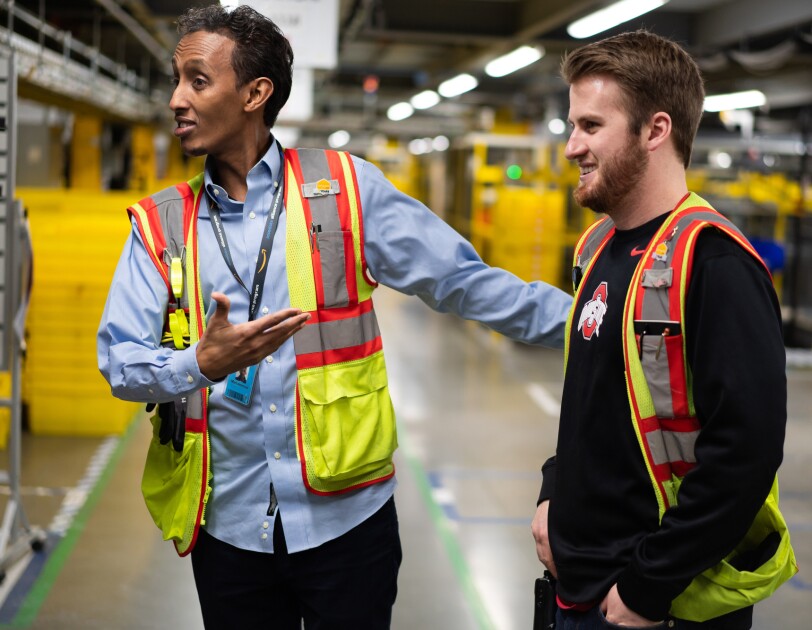 Hirsi reminisces with Area Manager John Statsick. The two worked together when Statsick joined Amazon in 2017. He describes Hirsi as his "mentor."
Photo By JORDAN STEAD 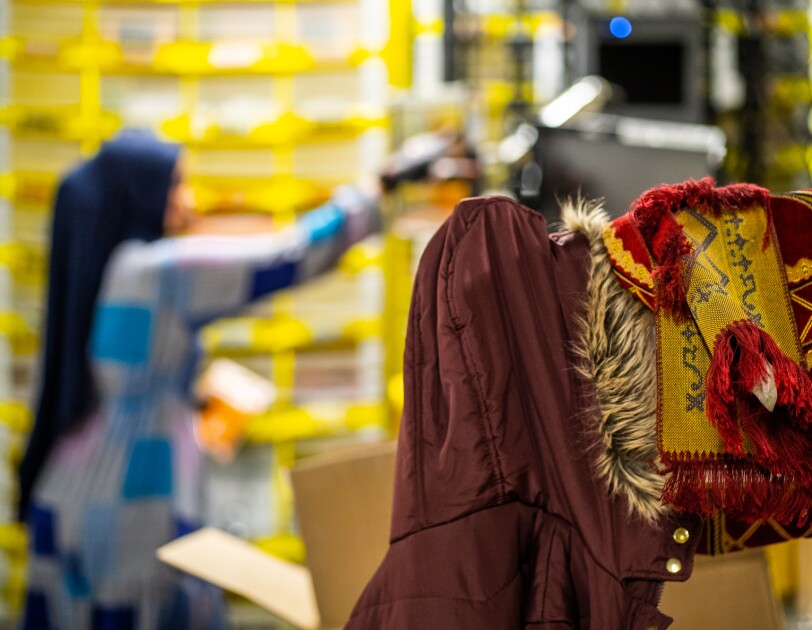 A prayer rug belonging to a Muslim associate. Muslims pray five times each day, including at work.
Photo By JORDAN STEAD 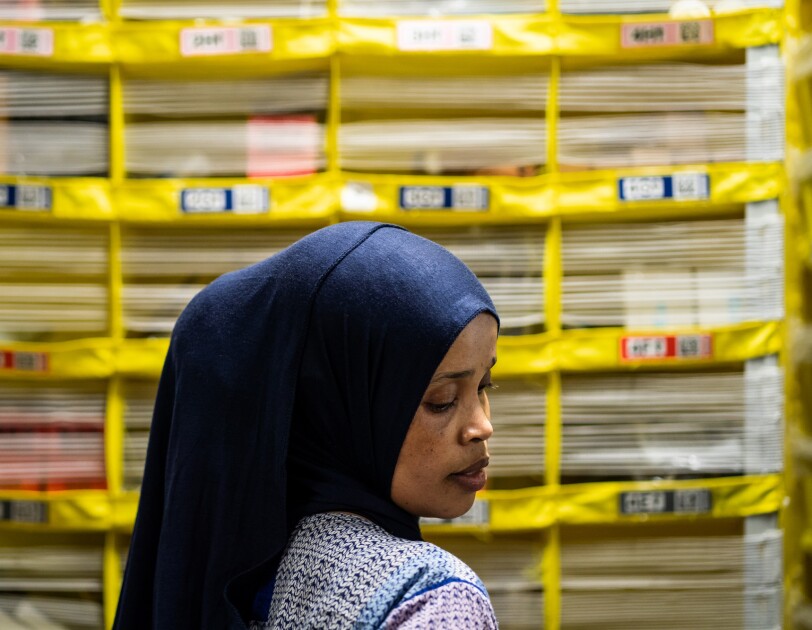 An Amazon associate in Shakopee, MN.
Photo By JORDAN STEAD

He also finds community and understanding of culture through his job at Amazon. Hirsi shares Amazon’s commitment to maintaining open and direct dialogue with employees and the communities in which it operates. As a manager working across the company’s diverse Minneapolis fulfillment network, a big part of Hirsi’s job is ensuring Amazon associates, many of whom are also East African, are supported at work. “I’m out there just to remove barriers—cultural barriers, process barriers, whatever. I am there to help them. That is where I am at my best.”

Hirsi understands the challenges of maintaining one’s identity in a big company and a new country. Hirsi supports employees as they navigate Amazon, and he works with Amazon to provide additional cultural support where needed.

“I think every person is stronger and happier when they are understood and accepted no matter who they are,” said Hirsi, who was instrumental in establishing prayer rooms within Amazon fulfillment facilities in Shakopee, Minnesota.

Muslims pray five times each day, including at work. In addition to a room with prayer rugs, one facility has areas to perform Wudu, a Muslim cleansing ritual performed before prayer that involves washing the hands, mouth, face, arms, and feet. For the formal, Friday prayer, roughly 35 Muslims at the fulfillment center pause work and gather together in a meeting room on site.

Since entering Minnesota in 2011, Amazon has opened a fulfillment center, two sortation centers, a Prime Now Hub, and a Technology Hub in the state, investing over $900 million and creating thousands of full-time jobs across the state. Many of those jobs are held by East Africans in the Minneapolis area.

Amazon works closely with community organizations including the Cedar Riverside Opportunity Center, which fosters employment and economic opportunities for residents and the larger East African community in the Minneapolis metropolitan area. “We’re excited that Amazon is engaged and supports our work to proactively connect all residents to opportunities such as procurement, transportation contracts, managerial positions, and employment that can provide a sustainable livable wage,” said Saeed Bihi, manager of the Cedar Riverside Opportunity Center. “As a result, we believe residents will have access to the resources and opportunities they need to succeed while strengthening the communities where they live and work.”

Walking the floor of the 1-million-square-foot fulfillment center, Hirsi is in the zone. More than 3,300 people work in Amazon facilities near Minneapolis. Hirsi says he knows most of them by name, and they know him.

John Statsick started as a college hire at Amazon’s fulfillment center in June of 2017. He and Hirsi worked as area managers and connected immediately. Both are in different roles now, but Statsick says Hirsi continues to mentor him. “He gave me the tools to work past communication barriers and connect with people that come from vastly different cultures than me,” said Statsick. “Mahammud’s guidance has sharpened my engagement skills, conflict management, and areas in my personal life.”

Maintaining Amazon’s inclusive culture that celebrates diversity is what Hirsi loves most about his job. “The more we understand and support each other, our culture, our traditions, the more successful we all are. That is what Amazon is about.” 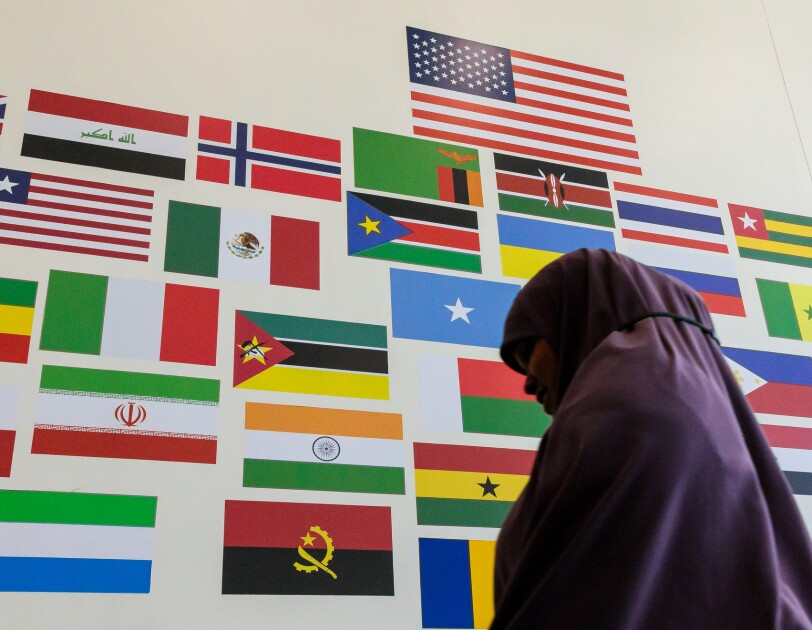 Flags from around the world celebrate Amazon's diversity at the entrance of Amazon's fulfillment center in Shakopee, Minnesota.
Photo By JORDAN STEAD 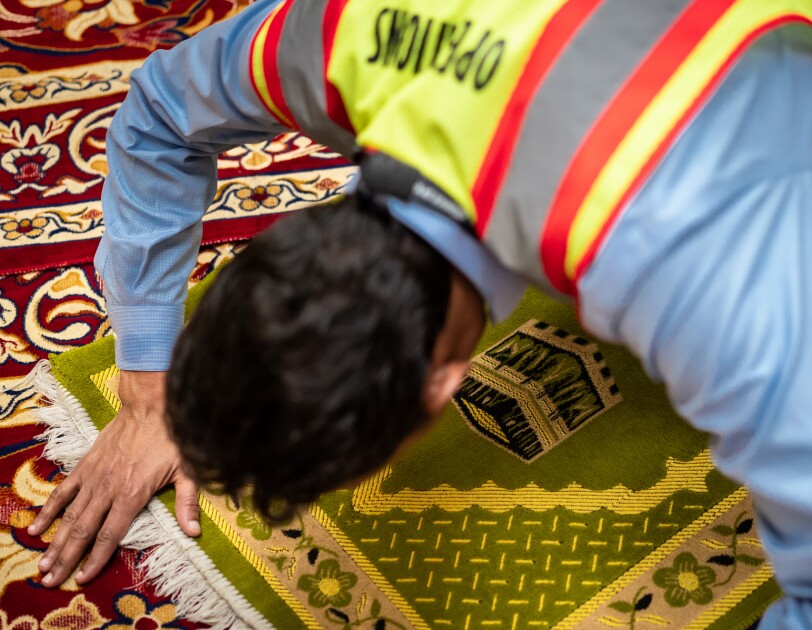 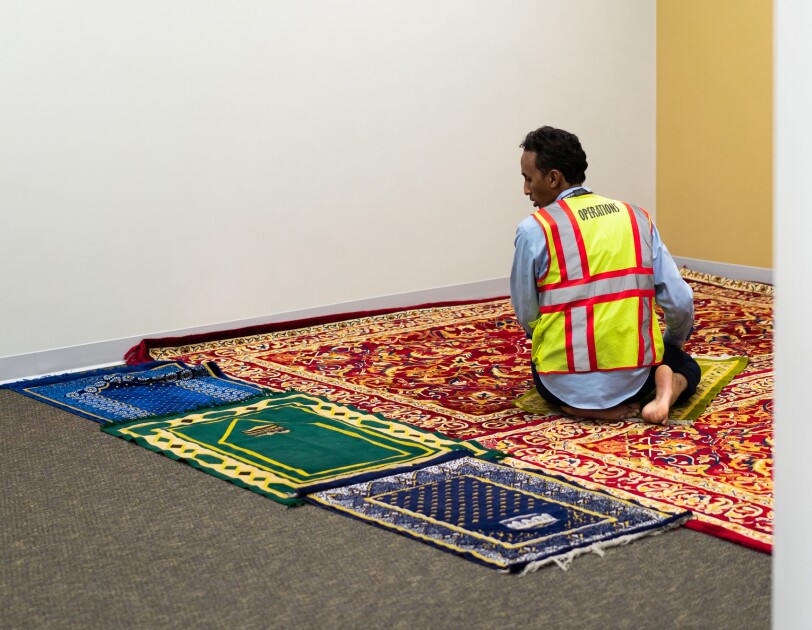 Hirsi steps inside a prayer room onsite at an Amazon sortation center. Muslims pray five times each day.
Photo By JORDAN STEAD
Amazon StoriesCulture and diversityFulfillment centerMinnesotaOperationsJob creation and investment
About the Author

Giving employees the skills and training that enable them to leave Amazon.
Continue Reading
Amazon responds to COVID‑19
How we're supporting our employees, customers, and communities
Learn More
Return to video player ➡ 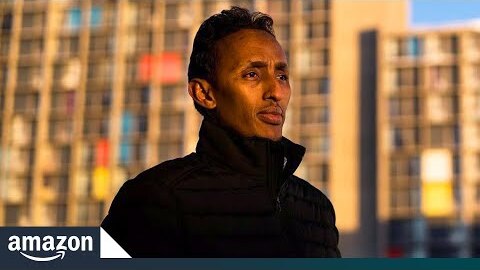 Building bridges in the place he made his home