Amazon fulfillment center associate Jeremy Balkan and his service dog work together on behalf of customers.
By Meg Coyle

Walking into an animal shelter in 2005, Jeremy Balkan knew what he was looking for. But he left with something he never expected. 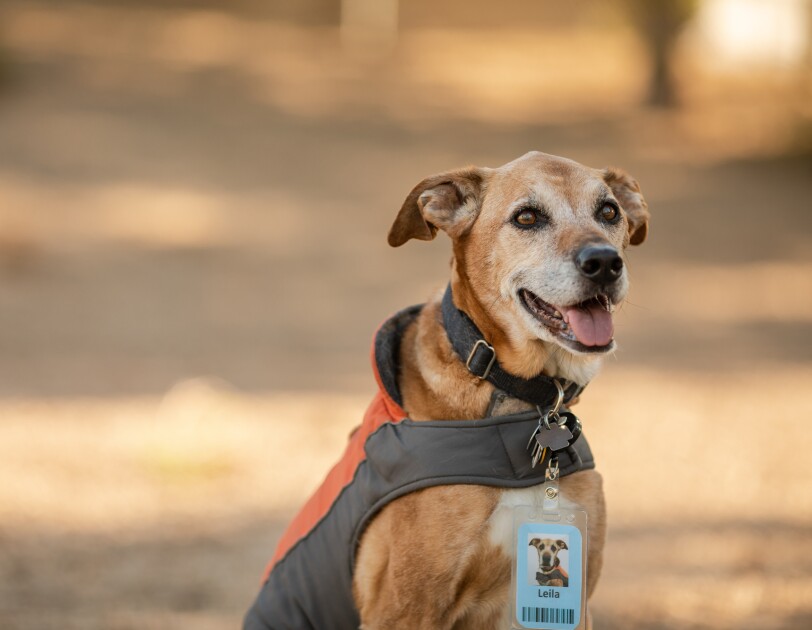 Leila joins her owner, Jeremy Balkan, at the Amazon warehouse where he works. "I like to say she’s my ears," says Balkan, who was born deaf. "Whatever she hears, I trust her completely."
Photo By JORDAN STEAD 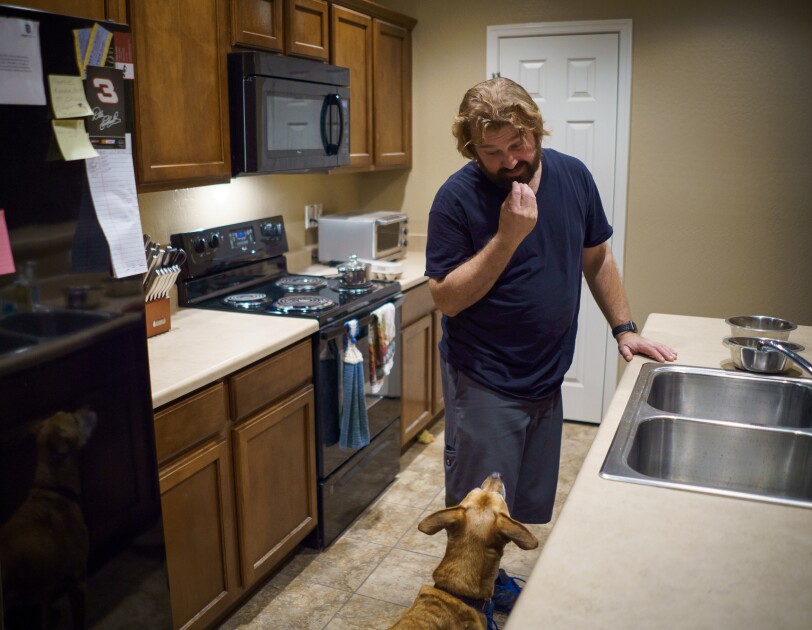 Balkan signs to Leila that it's time for breakfast.
Photo By JORDAN STEAD 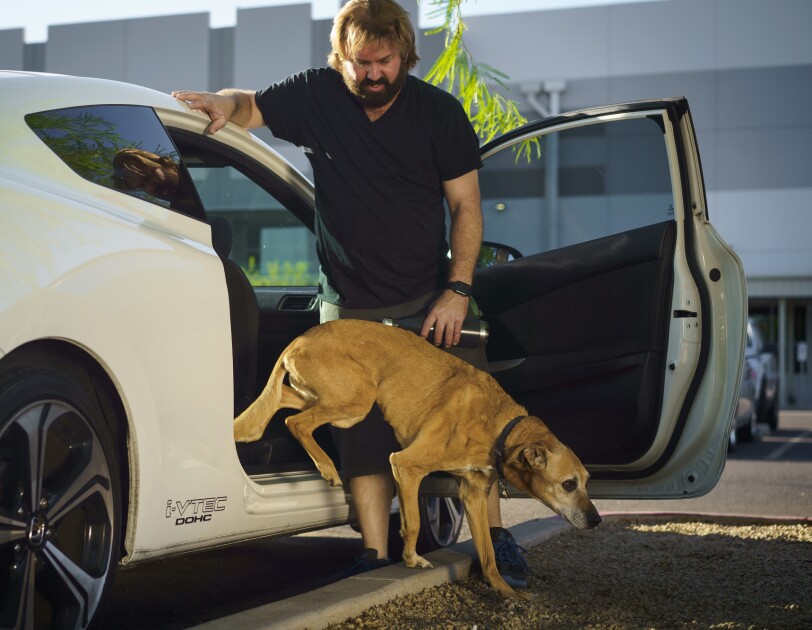 Balkan and Leila arrive at work.
Photo By JORDAN STEAD 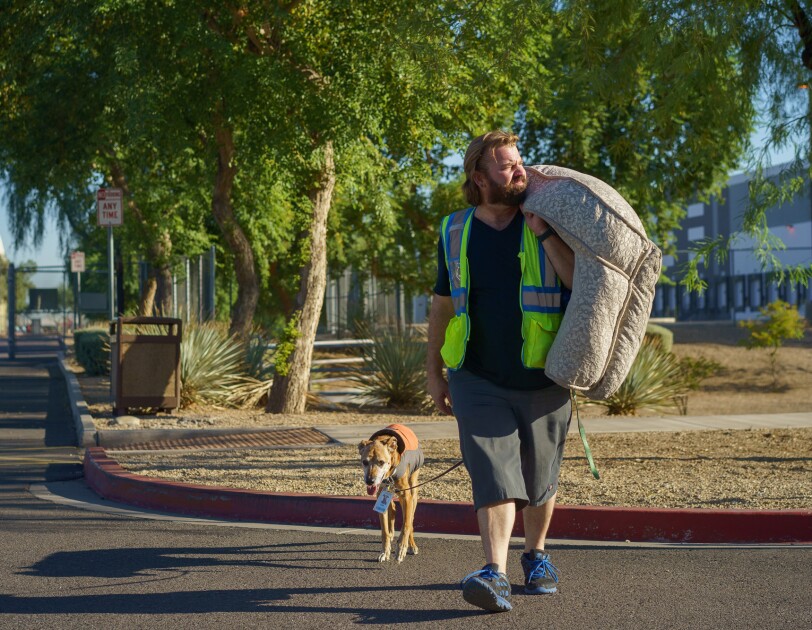 Balkan carries Leila's bed from the parking lot into the fulfillment center at the start of a shift.
Photo By JORDAN STEAD 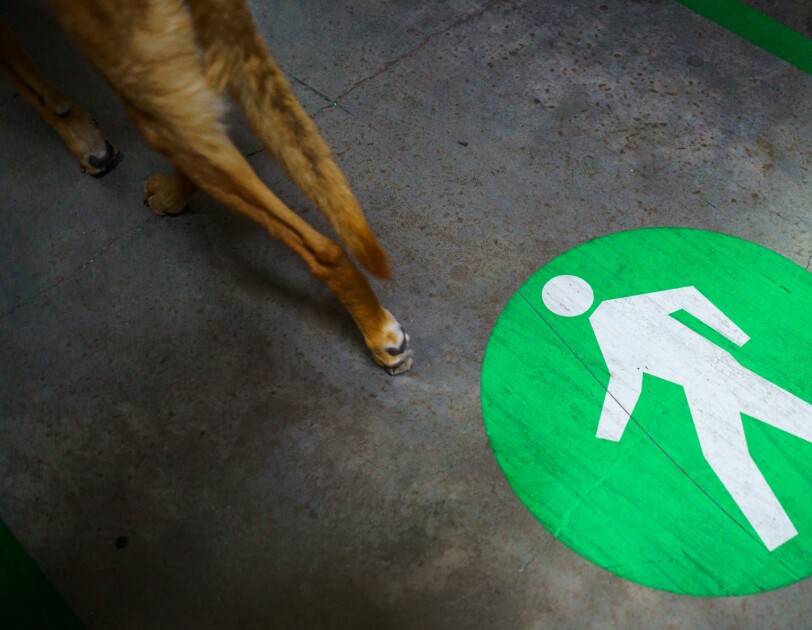 Leila sticks to the path inside the fulfillment center.
Photo By JORDAN STEAD 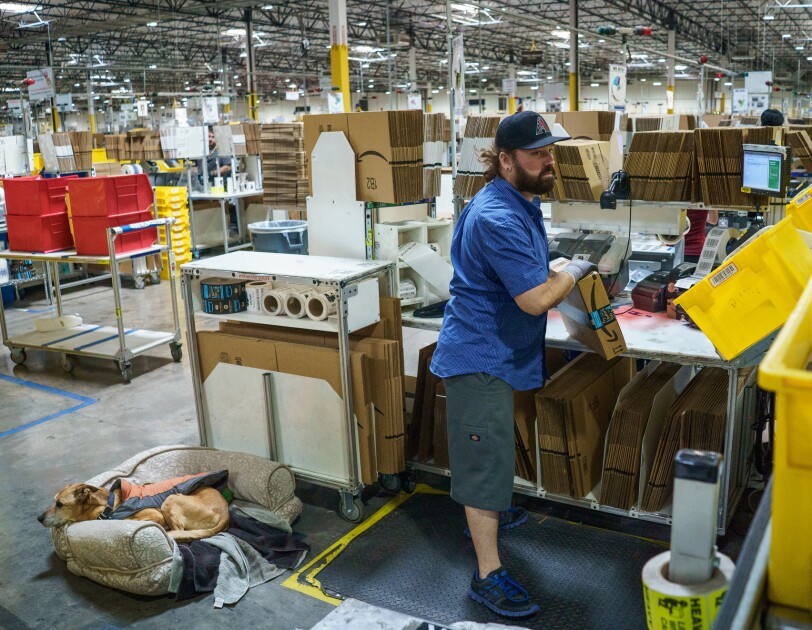 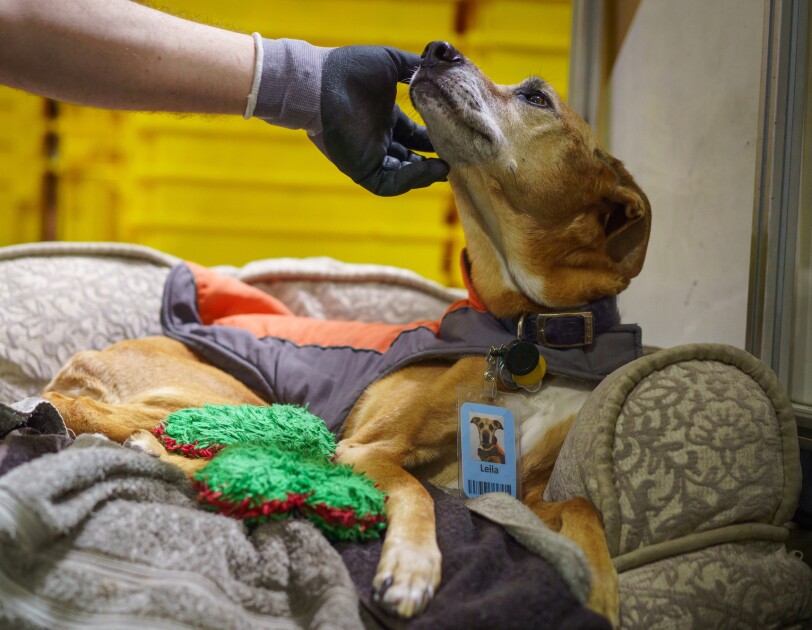 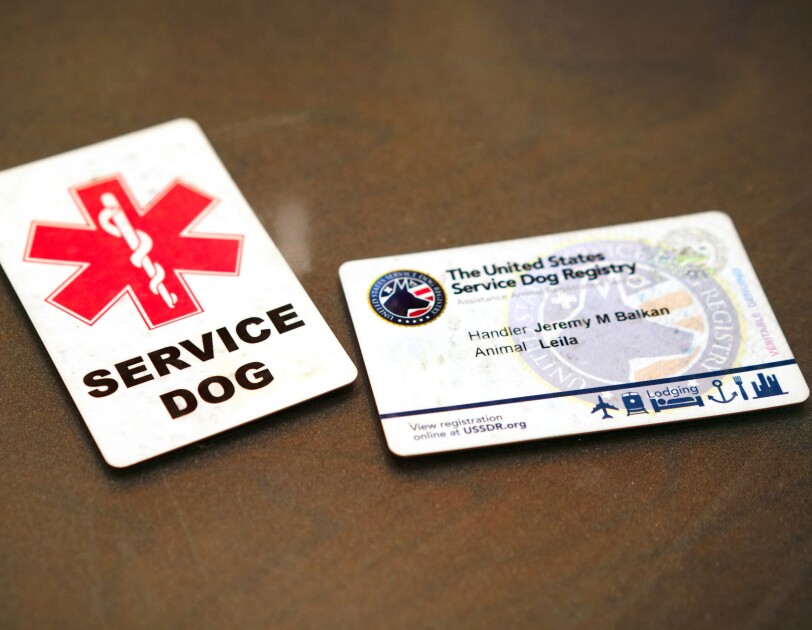 Balkan had his heart set on adopting a pit bull. And there they were, a room full of puppies including pit bulls, waiting to meet him on the other side of the glass. Entering the room, he sat on the floor, expecting to be surrounded. As it turned out, Balkan wouldn’t be choosing a dog that day. Because one caramel-colored mutt had already chosen him.

“She wanted me to pick her and anytime I tried to find another dog, she would get in my way,” said Balkan. “She was stubborn. She was not going to let me get another dog.” It seemed like the puppy knew he needed her more than she needed him. Balkan decided to “give up and go with her, and it was the best decision I’ve ever made in my life.”

Balkan was born deaf. When he brought Leila home that day, he didn’t intend to make her his service dog. But once again, Leila had other plans.

“I like to say she’s my ears. Whatever she hears, I trust her completely.”

Leila was a natural. She was on the lookout if Balkan was at the ATM, alerting him if someone was behind him. Leila’s eyes were always trained on him. “She knows me so well, probably better than I know myself.”

Balkan got to work training Leila to become a service dog. She eventually received her official vest, badge, and service card. But then Balkan was laid off. Soon after he lost his home and went through a breakup. “And I had a young daughter to support. It was the lowest point in my life,” he said.

He applied for an associate role at an Amazon fulfillment center in Phoenix, and in 2016 he was hired. He provided the necessary documentation for Leila, including a note from Balkan’s doctor and Leila’s service animal identification, so she could come to work with him.

The two come to work together every day with dog bed and water bowl in tow. Balkan is at his work station, packing customer orders. Leila is there too, with her own job to do. “When there’s something I need to know, she will come in front of me and sit down, and she looks right at me with her ears down,” Balkan said. “It makes my job a lot easier. I can just focus 100 percent on my job.”

Leila also joins Balkan at stand-ups, the daily meetings in which associates get ready for the day ahead. Balkan will often sign those meetings for fellow deaf or hard-of-hearing associates. Amazon also provides onsite interpretation services when requested, and has introduced Video Remote Interpretation (VRI) as part of the company’s ongoing commitment to increase access for deaf and hard-of-hearing employees.

“At Amazon, I know I’m in the right place,” said Balkan. “I feel valued, I feel important, I feel like I have a role here and a purpose."

Just as we were publishing this story, Balkan accepted an offer to begin a new role at the fulfillment center. He and Leila will now work in information technology as an equipment coordinator. "Hard work really does pay off," he said.

Meg Coyle is a recovering journalist, wife, mom, animal lover and storyteller.
How did you like this story?
Yawn
It's OK
It's good
It's great
I love it!
970 Ratings
Thanks!
Operations

Giving employees the skills and training that enable them to leave Amazon.
Continue Reading
The Australia bushfire crisis
What Amazon is doing for support organizations on
the frontline of the Australian bushfire crisis, and how you can help.
See how you can help
close
Out for Delivery
Get the best of the Amazon blog, including the latest news, top stories you may have missed, and editor's picks, delivered right to your inbox.
Sign Up
Return to video player ➡ 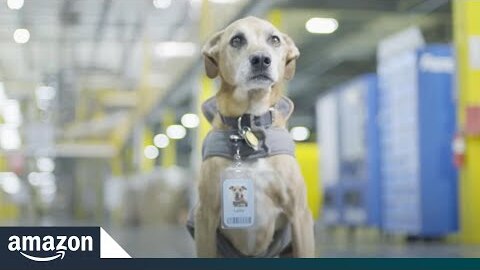