Feeding a sense of community in Chattanooga

Amazon has helped spark a bustling food truck scene outside its warehouse in Tennessee, which keeps employees well-fed and local businesses booming.
By Day One Staff

Jacob D’Angelo’s Chattanooga food truck got rolling in 2013 and picked up speed three years later when he was invited to do business at the Amazon Fulfillment Center (FC) on Discovery Drive. With more than 1,500 full-time employees, that’s a lot of potential mouths to feed.

“I call it the ‘Amazon training,’” D’Angelo said. “They’ve got a short window and come out in two shifts–two waves–so you’ve got to do it quick, and they’ve got to like it or they don’t come back.”

What keeps Amazon employees coming back to his Rolling J’s Mobile Bistro is the classic Reuben on locally baked marble rye and the crisp fries heaped with slow-smoked pulled pork, cheddar cheese, sour cream, and chives. D’Angelo uses fresh ingredients, and the menu evolves with the seasons.

The widespread popularity he has enjoyed–as well as the extra revenue–has allowed him to expand to a brick-and-mortar restaurant. Riverside Bistro, which is scheduled to open in downtown Chattanooga later this year, will feature a menu of gourmet Southern-style sandwiches and sides.

Last year alone, Amazon invested more than $340 million in infrastructure and compensation to its 2,000 employees in Chattanooga. And Amazon’s investments generated an additional 2,900 jobs on top of the company’s direct hires—including the food truck owners—and contributed an additional $440 million to the local economy.

“When a big company like Amazon is willing to give us a shot as small business owners, it’s just amazing,” D’Angelo said. “We’ve gotten to know the employees and the management and they’ve become like family. It’s fun to work there.”

“The Amazon employees are so appreciative, and it’s a great feeling,” added Greg Nak, owner of Greg’s Sandwich Truck. He already ran a deli in town before he got into the food truck business in late 2017. Thanks to his work with Amazon, Nak quipped that he’s never been faster at assembling his famous hand-cut deli meats and cheeses on fresh-baked bread. 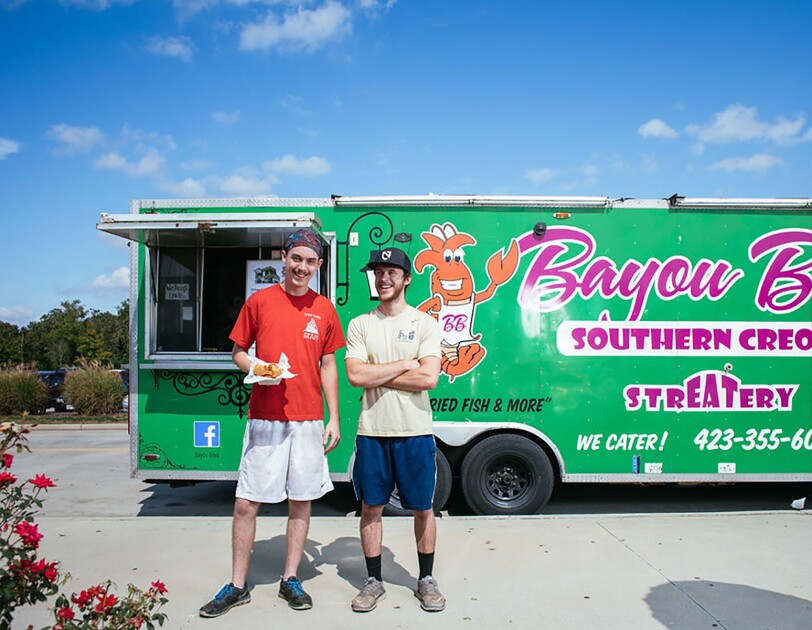 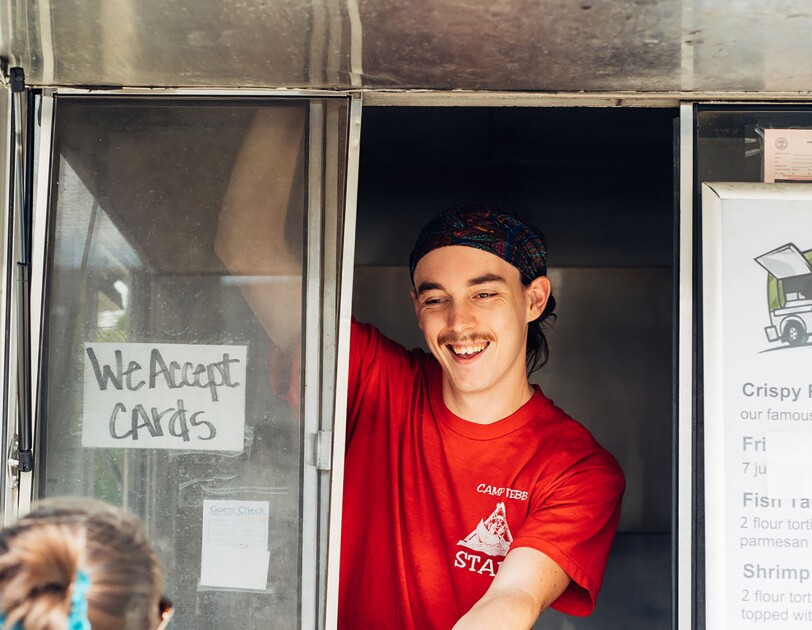 A customer receives a basket of food from the Bayou Bites food truck.

Melissa and Heath Dorgan have also benefited from parking their food trailer, Bayou Bites, at the Amazon facility. From Longview, Texas, the couple used to travel the country working fairs and festivals and came to Chattanooga to set up for a big fireworks show. They ended up meeting David Mitchell, Amazon’s Food Truck Program Coordinator, who extended an invitation to park at the facility. It worked out so well, they’re now Chattanooga residents.

“We feel more anchored here for sure,” Melissa said. “Being at Amazon has really helped get our name out there. We’ve got a following around town since a lot of the employees come and see us at other events on the weekends.”

Bayou Bites’ fried catfish is locally sourced and served with Cajun-spiced fries or battered onion rings. Another specialty is their fried shrimp tacos topped with peach-mango salsa and sriracha sauce. Thanks to the truck’s loyal fanbase, this year Bayou Bites is nominated for a “Best of the Best” award from the Chattanooga Times Free Press in the food truck category.

According to locals, the best food truck for fried chicken tenders, fried chicken sandwiches, and beer-battered waffle fries is Chick-N-Nooga. Its owner, Bruce Smith, once worked as a boat captain in South Florida and said the galley was good training for cooking in a tight space.

“I was very independent as a boat captain, but having a food truck gave me even more freedom,” he said.

Smith has been parking outside the Amazon FC since the spring of 2016 and was one of the first local entrepreneurs to recognize the possibility for building a business.

These days, his poultry marinates in refrigerators overnight. In the morning, he doesn’t have to do much prep work and pulls up to the lot about 10 minutes before hundreds of hungry employees pour out.

Baskets of chicken and waffle fries are filled to order and served with one of seven sauces. There’s “nooga” sauce, for instance, which is zesty and tangy, sriracha honey that’s sweet with heat, and cool, creamy ranch, among others.

When asked about the secret floury mix that breads the buttermilk chicken, “I go way past paprika and garlic salt,” was about all Smith would reveal.

“If everything goes according to plan and is running smooth, there’s maybe a minute or two wait, sometimes even quicker than that,” Smith said. Despite the hurried pace, he said he’s made friends with many of his customers and gets to spend time with his two kids, ages 6 and 12, during his free time between shifts.

As Smith noted, the overall impact Amazon has had on Chattanooga and the surrounding areas has been immense. “It has given people with little or no college the opportunity to walk into a decent paying job with benefits if hired on by Amazon.”

Jacob D’Angelo also reflected on how Amazon has inspired other businesses in the region. “In 2013, Chattanooga wasn’t particularly friendly to food trucks,” D’Angelo recalled, describing how they’d get kicked out of parking spots even when he’d rented them. In winter, it was almost impossible to make money. But when other corporations saw the success of Amazon’s program, they wanted to do the same thing for their employees and took a similar leap of faith with the mom-and-pop businesses.

“Amazon was the catalyst for the food truck movement in Chattanooga,” he said. 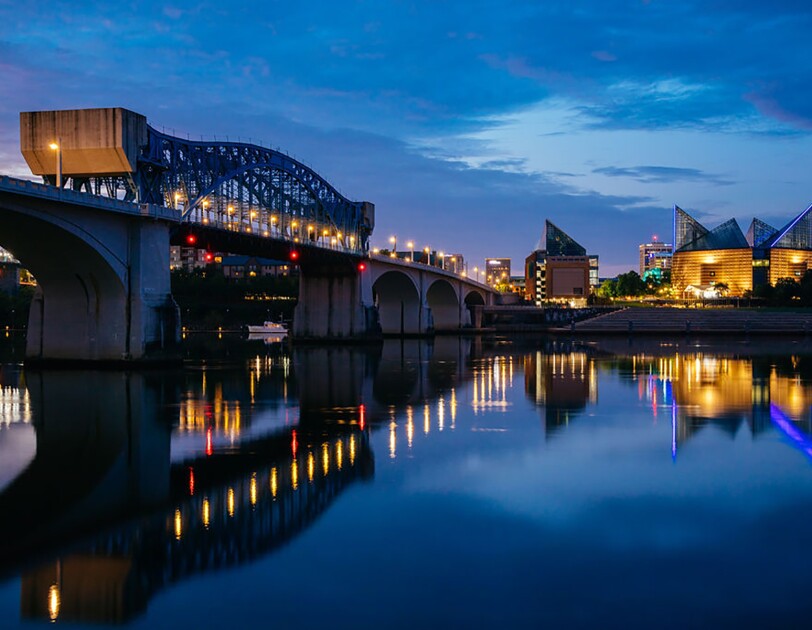 The Tennessee River at night 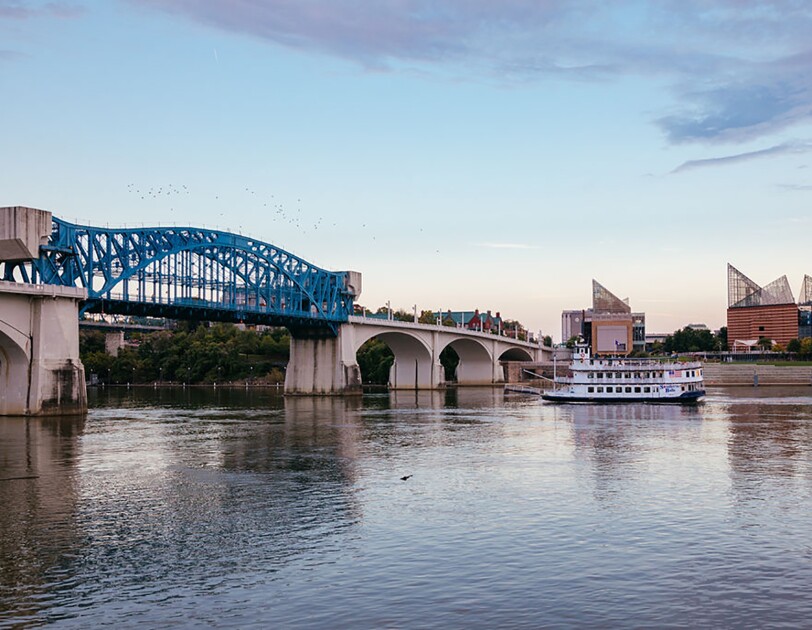 The Tennessee River, near Chattanooga. 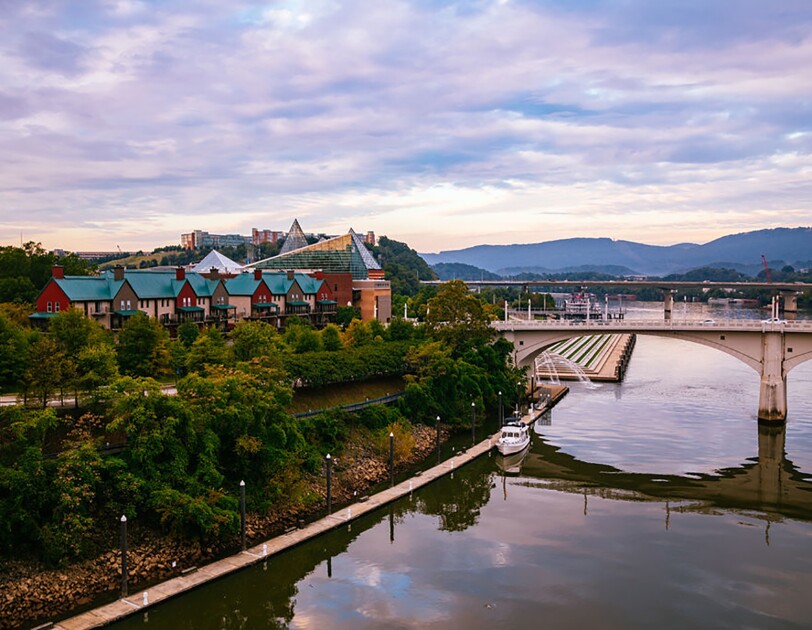 Over the past 10 years, Amazon has invested more than $350 billion in the United States, including infrastructure and compensation, and we’re excited to continue creating in communities across the U.S.
Continue Reading
Amazon responds to COVID‑19
How we're supporting our employees, customers, and communities
Learn More