From Ring to ecobee, a series of startups are innovating voice technology with the help of the Alexa Fund.
By Day One Staff

The Ring Video Doorbell didn’t come out of a business plan—it started as a life hack. Back in 2012, Jamie Siminoff was working on other business ideas from his garage, and he couldn’t hear or see when someone came to the front door. Figuring there must be a doorbell that could hook up to a smartphone, he went looking for one.

After realizing no such thing existed, he jerry-rigged a solution, "really not thinking about it as an invention but more just fixing my own problem." Siminoff’s wife thought it was the best thing he'd ever built, noting it made her feel safer.

The company he started eventually became part of Amazon, which acquired Ring in April. But before the acquisition, Ring was one of several companies that received support from the Alexa Fund, Amazon’s $200 million venture capital commitment to voice innovation.

It's been less than five years since Alexa began changing the way we do everything from buying groceries to adjusting the thermostat. Now the idea of simply telling “Alexa” to do a number of things is second nature, and with tens of millions of Alexa-enabled devices out there, an unprecedented conversation has begun.

That conversation started with a little black speaker, but Echo and Alexa were never intended to be an exclusive duo. Amazon’s goal was to build a community around Alexa, the powerful voice service that brings smart devices to life. To accomplish this, Amazon introduced comprehensive developer services with the Alexa Skills Kit (ASK) and Alexa Voice Service (AVS), launched a $3.5 million university challenge for advancing conversational artificial intelligence, and established the Alexa Fund.

The fund supports companies in various stages of growth, from startups to well-established brands. In addition to financial backing, portfolio companies get help forging connections within Amazon and receive early access to developer tools that make it easier to integrate voice into their business. The Alexa Fund also provides hands-on support during the product development cycle and support with marketing and selling on Amazon.com.

Since its launch in 2015, the Alexa Fund has invested in more than 40 companies, including thermostat maker ecobee, Bluetooth tracking service TrackR, and home security startup Ring. The additional resources have helped pave the way for several Alexa-enabled devices, like the ecobee4 Smart Thermostat, and numerous technologies and skills that enhance the Alexa experience.

"The surface area of Alexa—meaning the functionality that is exposed to developers—has expanded meaningfully since we started," said Paul Bernard, Director for the Alexa Fund. In addition to making direct investments, the Alexa Fund has partnered with Techstars to create an Alexa Accelerator and established the Alexa Fund Fellowship at universities including Carnegie Mellon and Johns Hopkins.

The university fellows help create curriculum and hands-on experience in voice technology for students. “Ideally, some of those students will go on to form companies,” Bernard said, "and we'll be able to support them as investors when they evolve from student to entrepreneur."

With so much activity around voice technology, companies are already much more sophisticated in how they think about working with Alexa, Bernard noted. He looks for investments that are not only great venture capital bets but also ones that will advance the functionality of Alexa. "Both of those things are equally important," he said. "That makes our approach unique."

Ring is a good example. The company helped shape the camera functionality that was introduced with the launch of Echo Show. Using the Smart Home Skill API (application programming interface), Ring made it easy for their customers to get a live feed from the doorbell or outdoor cameras on the Echo Show's screen by saying, for example, “Alexa, show me the Vacation front door.”

"Across the board, Alexa Fund portfolio companies have been in the middle of some of these really important new feature launches for Alexa," Bernard said, adding that the investment from Amazon encourages companies to experiment more with voice.

Siminoff said the Alexa Fund investment opened the way for collaboration with the Alexa team, as they hammered out how their line of security devices and the Echo Show could work together to make for a better customer experience. But even before the Fund’s 2016 investment, he added, the companies were having conversations about how to work together.

"You take a long-term approach to working with Amazon," he said of the approximately four-year relationship. "Every year, there were things that came out of those talks or meetings that were beneficial to both companies."

More than a virtual peephole, Ring’s doorbells and cameras make it possible to speak to visitors from anywhere and capture video of intruders. It brings "presence," as Siminoff calls it, back to homes, even when people are away. 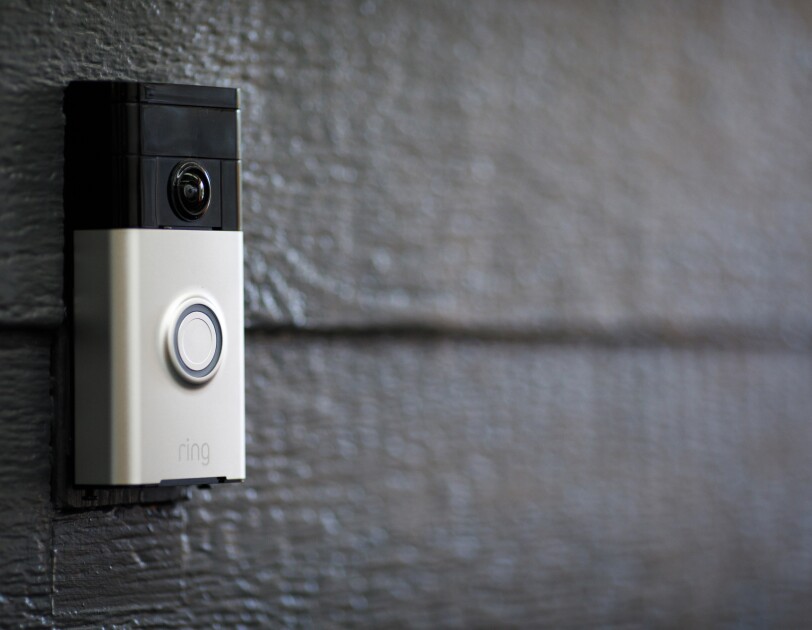 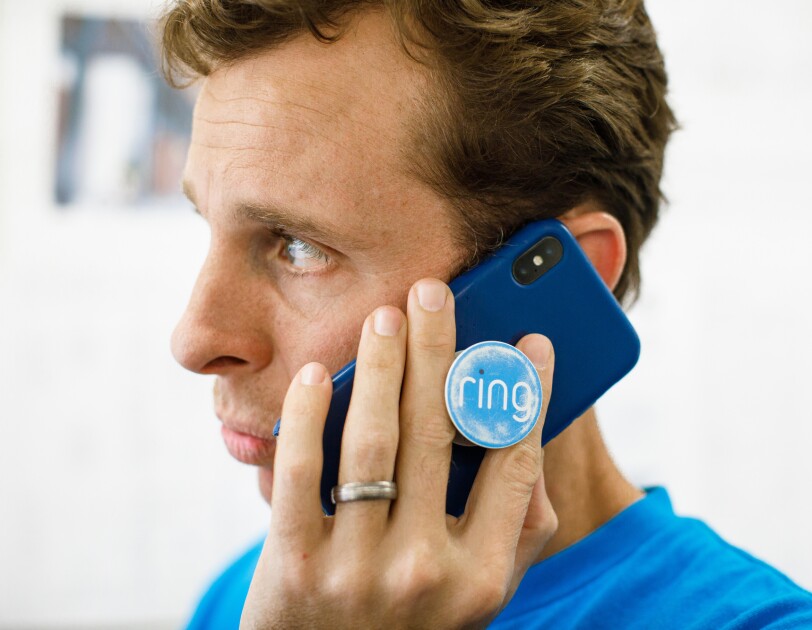 Jamie Siminoff, founder of Ring, talks on the phone during a meeting.
Photo By JORDAN STEAD / Amazon 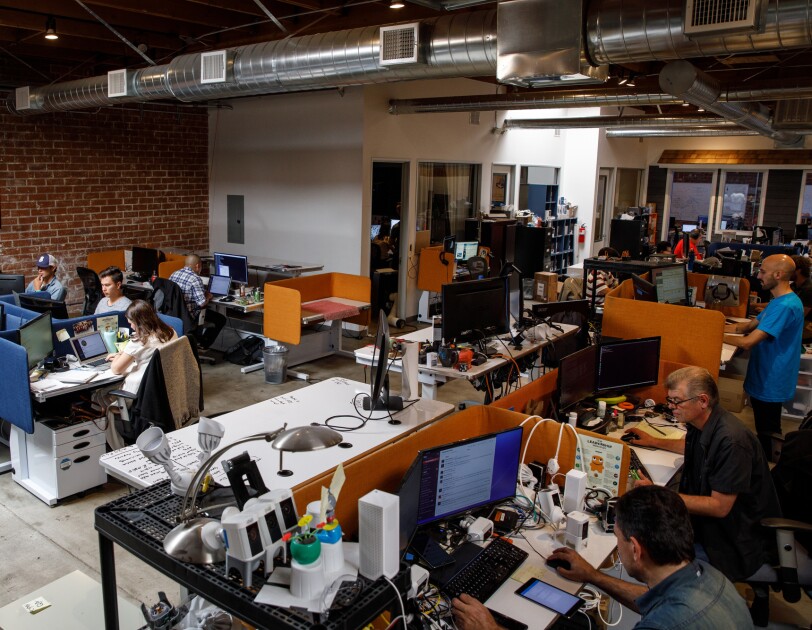 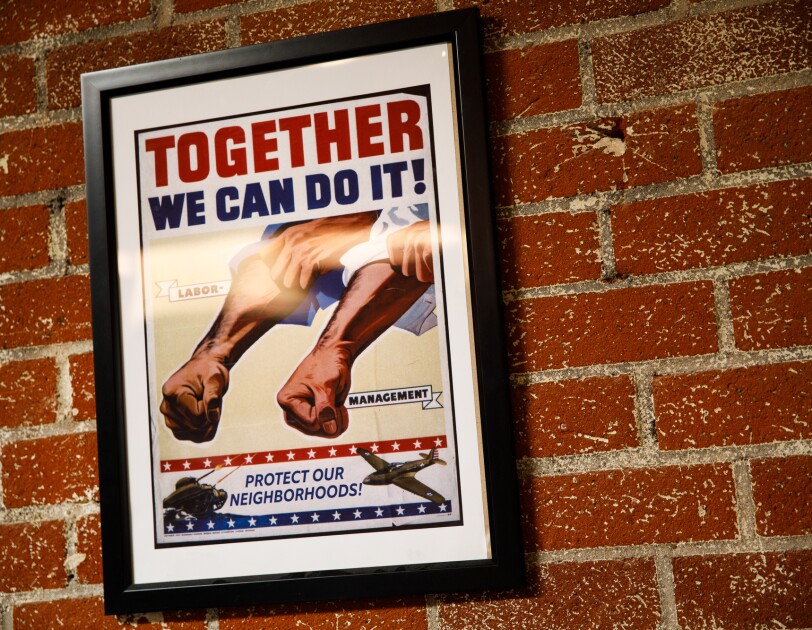 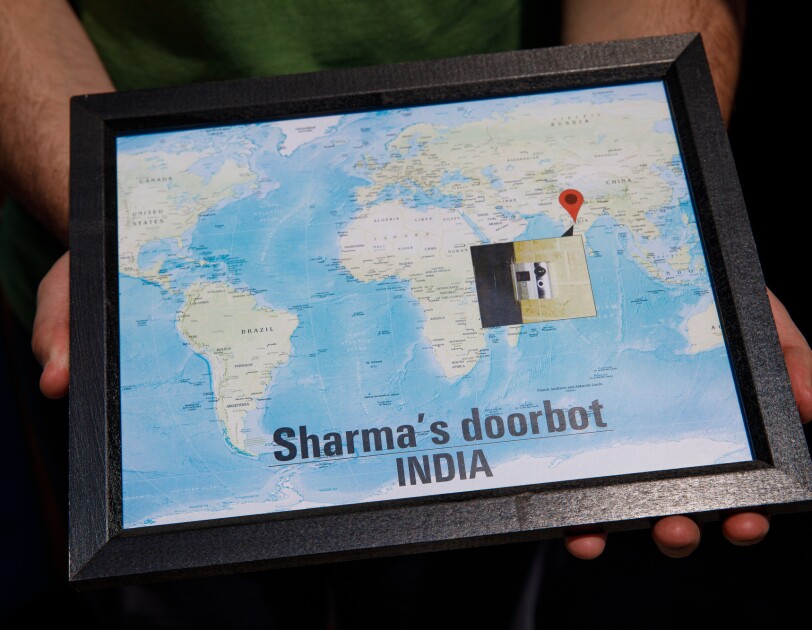 A framed map with a photo of a door showing an early Ring customer, Sharma in India. Numerous early customers have photos of their doors displayed at Ring headquarters.
Photo By JORDAN STEAD / Amazon 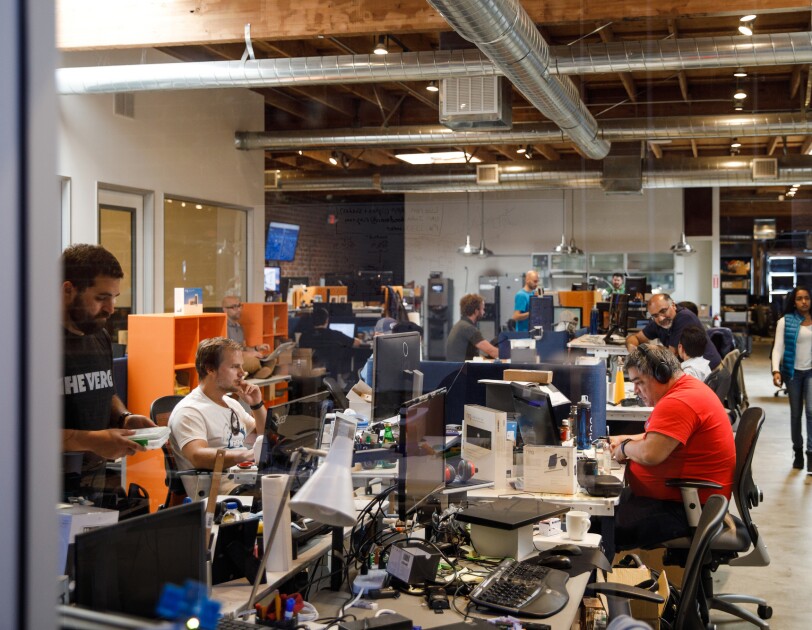 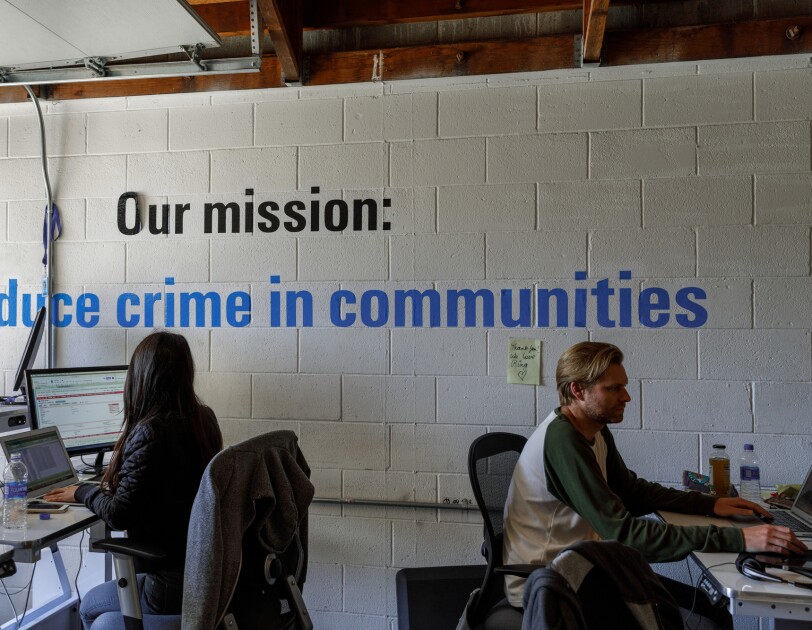 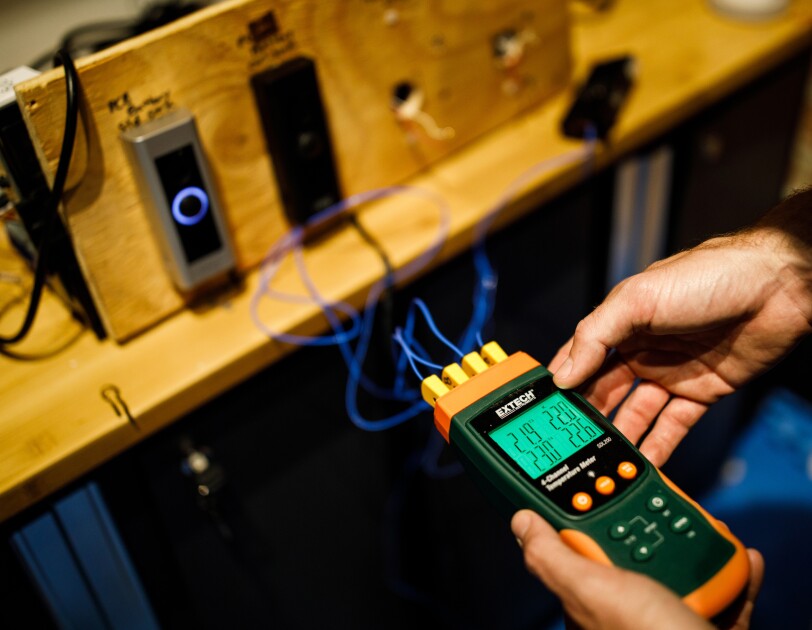 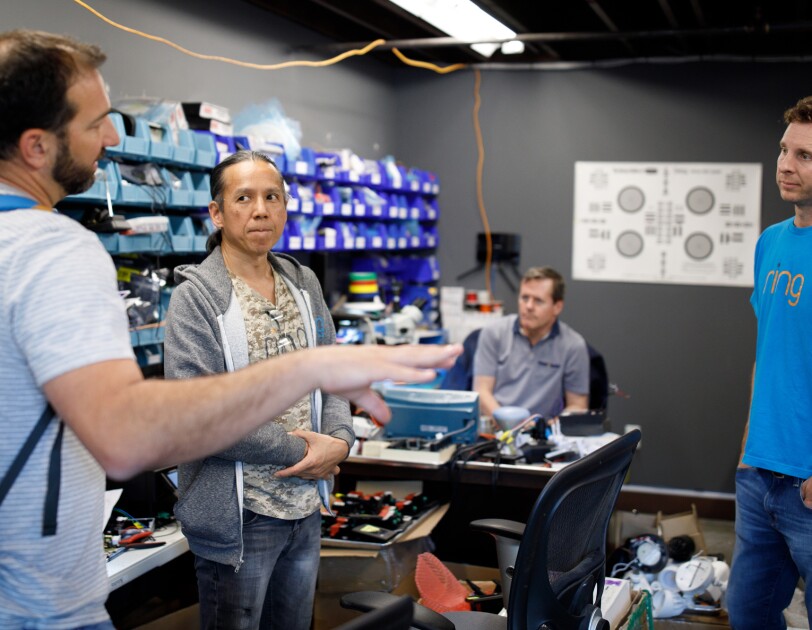 Jamie Siminoff, founder of Ring, talks to employees in a lab at Ring headquarters in Santa Monica, CA.
Photo By JORDAN STEAD / Amazon 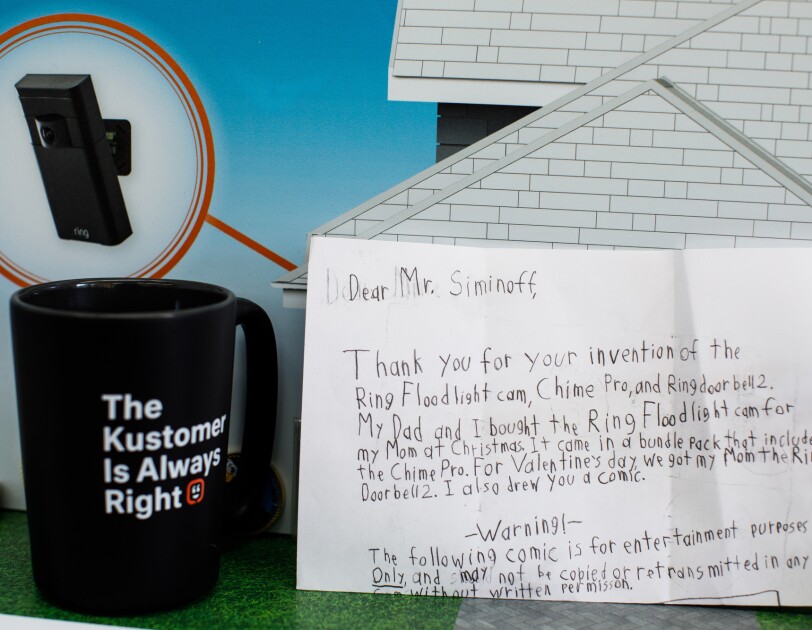 A letter to Jamie Siminoff, thanking him for inventing the Ring doorbell and Ring floodlight cam.
Photo By JORDAN STEAD / Amazon 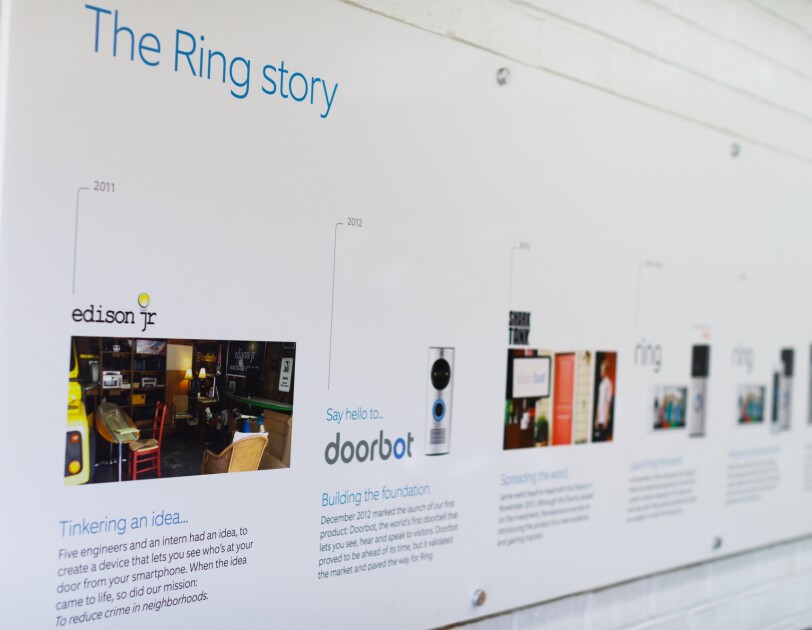 A timeline at Ring headquarters in Santa Monica, CA showing the evolution of the Ring story.
Photo By JORDAN STEAD / Amazon 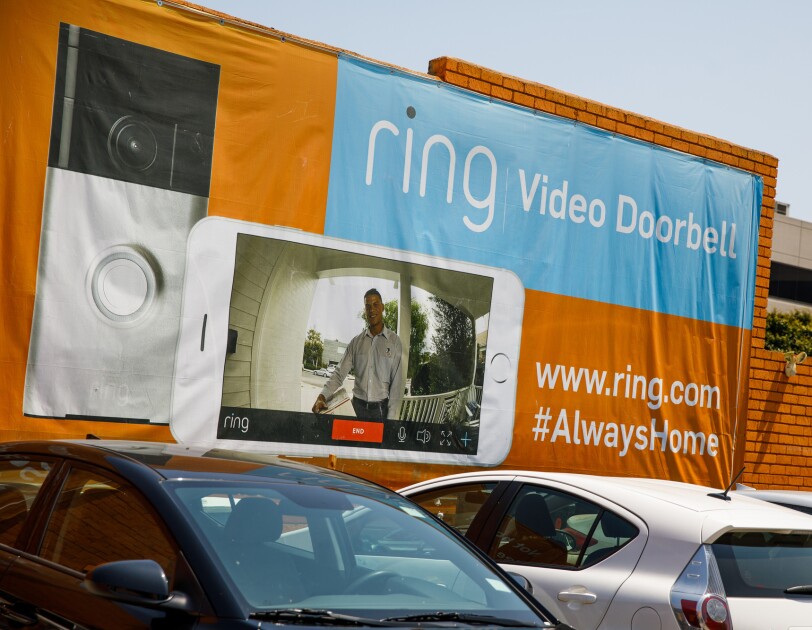 The company initially landed enough presale customers to start building the first version of the Ring Video Doorbell, but investors shook their heads.

"Their advisers said there's no way you could ever build an HD Wi-Fi battery-operated camera," Siminoff said. "It turns out it's really fricking hard, but you can."

A 2013 appearance on “Shark Tank” didn't secure a deal either, but it generated enough sales to pull the company back from the brink of failure. Concerned that the original name sounded too techie, Siminoff re-branded and re-tooled the DoorBot as Ring, and investors including True Ventures, Richard Branson, and the Alexa Fund followed. Ring products are now installed in more than 82 countries around the world, with more than 2 million "Neighbors", what Ring calls their customers.

Bernard was intrigued by the idea of Ring, even more so when he actually installed one. "I was just so rapidly converted, instantly," he said. And he liked the larger mission of reducing crime in neighborhoods: a pilot study Ring conducted in partnership with the Los Angeles Police Department saw break-ins drop by more than half when the doorbells were installed in 10 percent of the homes in one neighborhood.

That pilot program "really gave me a sense that Jamie was thinking about the business much more broadly than a simple product," Bernard said.

When Ring partnered with Amazon on the Echo Show launch, "that was a point of galvanization," Bernard noted. "We loved the company and everything they stood for, and then came this really clear path to doing something on Alexa that took it over the top for us."

Now that Ring is a part of Amazon, Siminoff sees the collaboration continuing, driving better features and enhanced security and alarm APIs that will trickle down to third-party Alexa developers and make for better customer experiences far beyond his own company.

Ring is just one of the many home-focused ideas that the Alexa Fund has backed, and Bernard noted the fund is also investing in technologies that expand Alexa to other settings. Vesper, for example, makes resilient microphones that could end up in a variety of Alexa-powered products, from earbuds to cars.

The community of developers and ideas that Amazon set out to build with the Alexa Fund is now thriving. Does that mean it has fulfilled its mission?

"What we've found is kind of the opposite," Bernard said. "The more we've been doing, the more opportunity there is in front of us."

That sense of limitless possibility for future innovation in voice technology has a nice ring to it, indeed.

The photo-obsessed Amazonians at DPReview.com take camera tests to the extreme so you can just relax and enjoy taking pictures.
Continue Reading
Entertainment

How Alexa and Amazon Music help you find the music you want (even when you don’t know exactly what you want.)
Continue Reading
Amazon responds to COVID‑19
How we're supporting our employees, customers, and communities
Learn More