Seeing and being seen with Amazon CTO Dr. Werner Vogels

How Amazon and its customers are tackling the planet's toughest problems on “Now Go Build.”
By Day One Staff

“They’re faster than they look.”

Dressed all in black except for his tan leather work boots, Dr. Werner Vogels drops the comment as he’s rounding the corner of a narrow street crowded with masonry houses in one of the smaller “barangays” or neighborhoods of Guagua in the Philippines. A few steps above street level, two men sit on a concrete porch admiring a rooster and watch as the Amazon CTO lopes past.

At almost two meters tall (that’s six-feet, four-inches), Vogels can be a physically imposing figure. Except he is anything but imposing as he hustles past the men and their bird. It’s impossible with a dozen or so laughing kids trailing in his slipstream.

Ice-cream is handed out to the small procession from a street cart that magically appears. The kids now busy, Vogels sits down at a card table with two members of the non-profit Humanitarian OpenStreetMap Team (HOT). He’s there to learn how an opensource software project -- powered by the local community and compute in the Cloud—is mapping the entire town.

Guagua is a few hours north of Manila, and in many ways its residents are still digging themselves out from the eruption of Mt. Pinatubo almost three decades earlier. The mapping project is an effort that includes HOT as well as the opensource mapping community OpenStreetMap (OSM). The goal of the international endeavor is to literally make these kids now covered in ice cream and their families seen by the world, and as a consequence provide a measure of safety in one of the most disaster-prone regions on the planet.

Being seen is a theme that runs through Vogels’ Prime and YouTube show “Now Go Build,” which is currently kicking off its second season with two new episodes, available now.

"In our first episode in Indonesia, we looked at a Jakarta-based startup, Hara, that has built a platform to give millions of smallholder farmers across Indonesia and Southeast Asia access to fair credit and a variety of NGO programs in exchange for their crop data,” Vogels said. “And as impressive as the blockchain-enabled platform that Hara built is, what it mind-blowing is how all these smallholder farmers can finally be counted, that they have an identity and a place in a financial system that was utterly out of reach before.”

Vogels is one of the world’s experts on distributed systems. He has played a huge role in building the infrastructure on which Amazon runs, and from which AWS was born. What is consistently surprising and inspiring, Vogels says, is how those same global-scale systems are now being harnessed by people with a purpose, in practically every corner of the world.

“It changes what is possible,” Vogels said. “In healthcare, education, clean water, energy, transportation, agriculture, even living in the shadow of a volcano that will erupt again. I am continuously amazed by the inventiveness and impact a small team can have on their community and circumstance. How they are making a difference in how we all live and work.”

Back at the card table, the conversation with the HOT team begins, and Vogels immediately jumps into the code-level details of how they and OSM have built a mapping tool that can be used by anyone with a smartphone almost anywhere on the planet.

The acceleration of a world made more virtual
In its first season “Now Go Build” follows Vogels from Southeast Asia to Europe and Africa as he meets with people tackling some of the planet’s toughest and most pressing problems. It’s everything from feeding a growing global population, to smart transportation and smarter cities, wildlife conservation, and helping refugees find a life and livelihood in a new place. There is also some electronic music fun thrown in. Vogels is, after all, a proud Amsterdammer.

The second season has stops in India, the Philippines, Japan, and Poland. In India, Vogels examines how a husband and wife team are preserving millennia-old art forms (and building businesses for female artists at the same time). The Philippines looks at what happens when the invisible becomes visible, when people are literally put on the map. Japan focuses on an aging population. How we can all take better care of each other with more connection, more dignity, and with an assist from some very smart systems.

Finally, in a world that has become more virtual for most of us, the Poland episode considers how the experience we are collectively going through can teach us to better teach our kids. It also examines the ways in which technology can make access to education more equitable for everyone. The pandemic forced a new approach to the final episode, and uncovered some new truths along the way.

Experiment, fail, succeed, but try everything
After shooting the India episode for Now Go Build with Bengaluru-based startup Zwende, Vogels is chatting with the team on their rooftop terrace and trying his hand at some ancient art forms. Innu Nevatia, one of the Zwende co-founders, whose search for the perfect table sparked the idea of the startup, wants to know what Vogels and the Amazon team regretted in the earliest days. Vogels doesn’t miss a beat.

"It's what we didn’t try," he said. "The ideas we had, but we set aside. Experiment, fail, succeed, but try everything. You don't know how big it will scale, or what impact it might have if you don't." 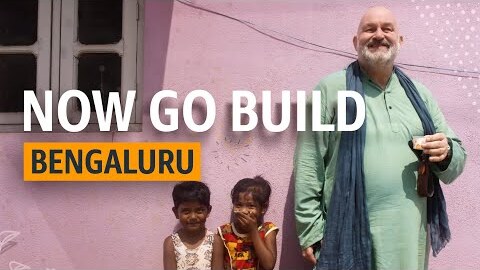