Jeff Bezos speaks candidly at re:MARS, on getting support for ideas, big bets, knowing when to throw in the towel, and more.
By Day One Staff

Jeff Bezos and Jenny Freshwater spoke on stage at re:MARS 2019. In addition to asking what Jeff would be if Amazon hadn’t worked out (a very happy software engineer), they spoke about Blue Origin and fulfillment centers on the moon. Watch the video for the conversation, or see below for six tips on business.

On builders and dreamers

How to be right, a lot

Getting support for your ideas

We have a framework at Amazon, it's one of our leadership principles, called Disagree and Commit. If you are the boss, the person you’re talking to may have better ground truth than you. Often the boss should be the one to disagree and commit.

A recent one would be Project Kuiper this is our LEO Satellite constellation.Putting thousands of satellites on lower earth orbit is very different from geostationary satellites. You end up servicing the whole world, accessing people who are under-bandwidthed—rural areas, remote areas. Going forward that access to broadband is going to be very close to being a fundamental human need as we move forward.

Knowing when to throw in the towel

Look around the room, when the last high judgment champion has thrown in the towel, it’s time to stop.

On starting a business

The most important thing is to be customer obsessed. Don’t satisfy your customers, figure out how to absolutely delight them. Passion – you’ve got to have some passion for the arena that you’re going to develop and work in. Otherwise you’re going to be competing against people who do have passion for that and they’re going to build better products and services. You have to be willing to take risk. If you’ve come up with a business idea and there’s no risk there, it’s probably already being done. You have to accept that your business is an experiment and it might fail.

Everything I laid out does not have to be at a startup. It works at Amazon, you can work at a Fortune 100 company and you should still have an entrepreneurial mindset. And you should preach and lead that inside your company. You should encourage your teammates to take risks and be customer obsessed. All those things work just as well inside of a company as they do inside of a startup.

An Amazon chief scientist explains how machine learning keeps Amazon warehouses humming.
Continue Reading
Amazon responds to COVID‑19
Watch this page for the latest on how we’re supporting our employees, customers, and communities.
Learn More
X
Out for Delivery
Thank you!
Please try again
Quick news and rich insights from inside Amazon, delivered directly to your inbox every few weeks.
Check your inbox shortly for your very first Out for Delivery email. We’ll reach out every few weeks with more.
If you’re not redirected back to the blog in a few seconds, click here.
Looks like we had some trouble authenticating your entry. Let’s try again...
Amazon Privacy Policy | Opt-out Anytime
Return to video player ➡ 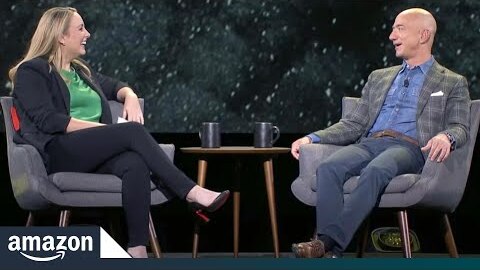