Top holiday music trends in the U.S. and around the world

Amazon Music—a leader in holiday music streaming—shares new insights on the popularity of music during the holiday season.
By Day One Staff

Holiday music is an essential part of celebrating this time of year, and no holiday would be complete without Michael Bublé singing about chestnuts roasting on an open fire, or without Mariah Carey belting out the lyrics to “All I Want for Christmas Is You.” But did you know just how voracious Amazon Music listeners are when it comes to their festive tunes? Today, Amazon Music revealed new listening trends—from the incredible frequency of customers asking Alexa for holiday music, to the grinchiest state in the U.S. (You’re a mean one, New Jersey.)

In the U.S. alone, there have been billions of streams of holiday music and more than 100 million voice requests for holiday music on Alexa this year. And since December 1, holiday music has been requested on average of thousands of times per minute on Amazon Music via Alexa in the U.S.

Customers in Pennsylvania, South Carolina, and Connecticut tend to play the most holiday music, while Louisiana in particular listens to the most songs about Santa Claus. New Jersey, on the other hand, had the highest listening of songs about the Grinch when compared to other states.

Which countries are the most festive? The U.S., Canada, Ireland, UK, and Germany streamed the most holiday tunes since November 1. In addition, Amazon Music customers have been asking Alexa to play holiday music every minute of every day since November 1.

“All I Want for Christmas is You” remains number one on Amazon Music globally since Thanksgiving Day, and is the most-streamed song in all 50 states this season. To celebrate the 25th anniversary of the song and corresponding album, Merry Christmas, Amazon Music recently released its brand-new mini-documentary, titled Mariah Carey is Christmas: The Story of “All I Want for Christmas Is You.” Available to watch globally, the mini-documentary dives deep into the origin of the groundbreaking holiday song from the multi-GRAMMY-award-winning artist. 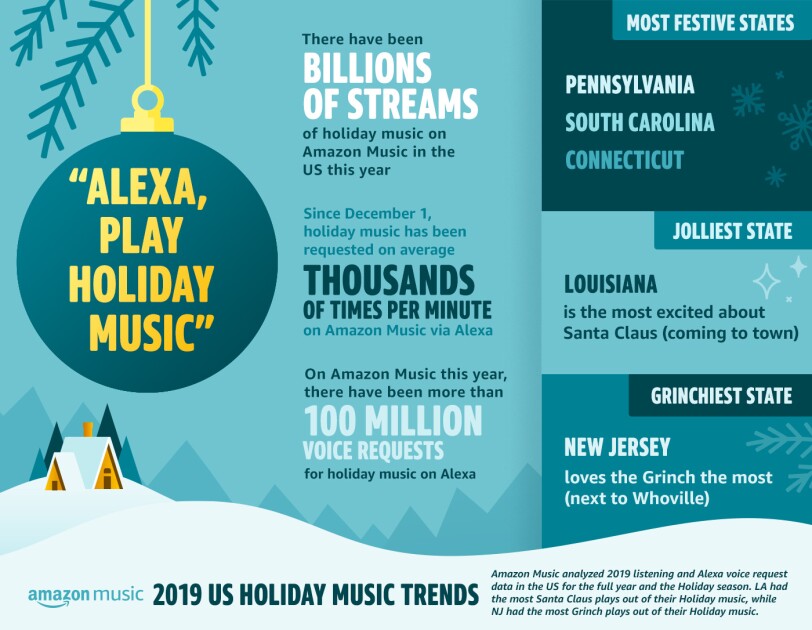 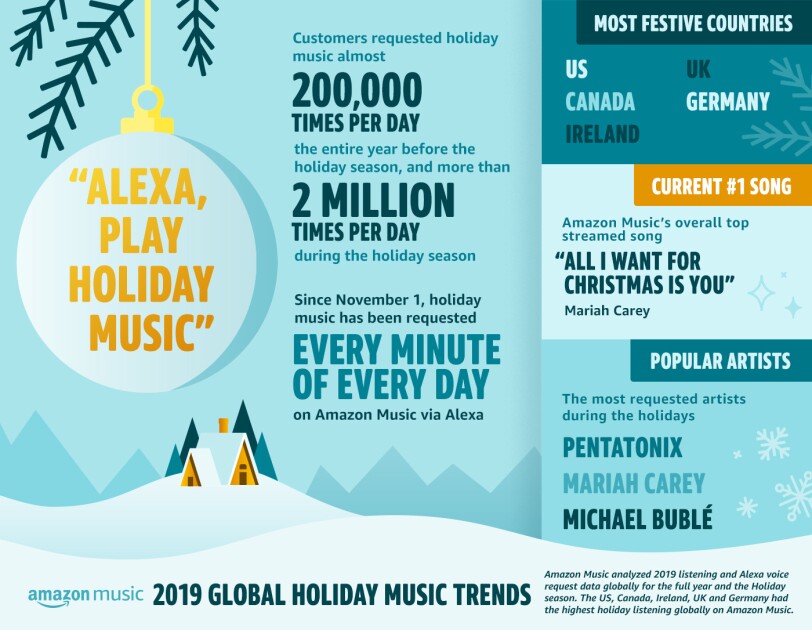 Music Amazon MusicEntertainmentHoliday
How did you like this story?
Yawn
It's OK
It's good
It's great
I love it!
Thanks!
Entertainment

Top playlists and thousands of stations are now available to stream on even more devices, for free.
Continue Reading
Shopping

Amazon’s Holiday Toy List sneak peek is here. Discover the top toys & games that will make every kid's wish list this holiday season.
Continue Reading
The Australia bushfire crisis
What Amazon is doing for support organizations on
the frontline of the Australian bushfire crisis, and how you can help.
See how you can help
close
Out for Delivery
Get the best of the Amazon blog, including the latest news, top stories you may have missed, and editor's picks, delivered right to your inbox.
Sign Up