The children who saw Crystal Swain-Bates and Dav Pilkey at Amazon's 2019 Bring Your Kids to Work Day got the message that they should revel in the things that make them different.
By Dave Quigg

When the mom and her kids finally got to the front of the line at the book-signing, she told bestselling author Dav Pilkey about her son's attention deficit hyperactivity disorder (ADHD). "So we have something in common, you and me," the author of the Captain Underpants and Dog Man series said to the boy. "That's cool!" 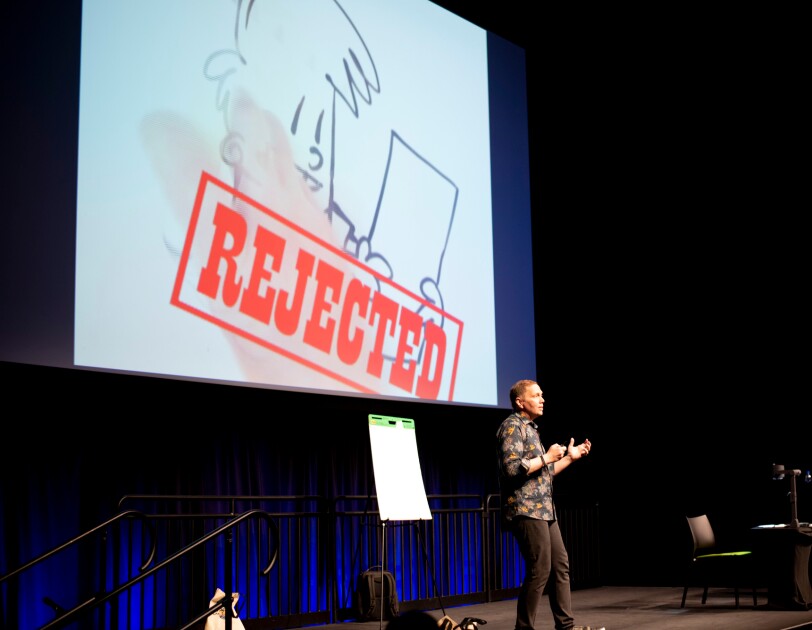 "I couldn't believe it. They wanted to publish it," Dav Pilkey said, bringing his audience into the moment when he overcame disappointment and found a publisher after 23 rejections. "They were going to turn it into a book. I got so excited that my head exploded." Giggles filled the venue as a cartoon version of Pilkey's head exploded on the big screen behind him. He had to stop talking for a good 10 seconds while the laughter died down.
Photo By DAVE QUIGG 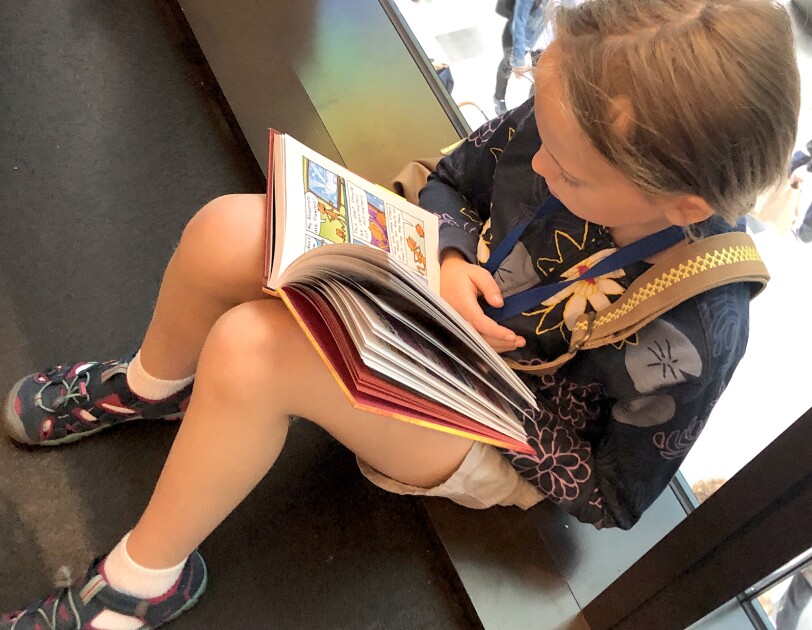 Seeing Dav Pilkey was so important to Tabitha Pokorny that she waited in two lines — once for his presentation at Amazon's Bring Your Kids to Work Day and once for his book-signing afterwards. She passed the time by reading the latest book in Pilkey's Dog Man series. 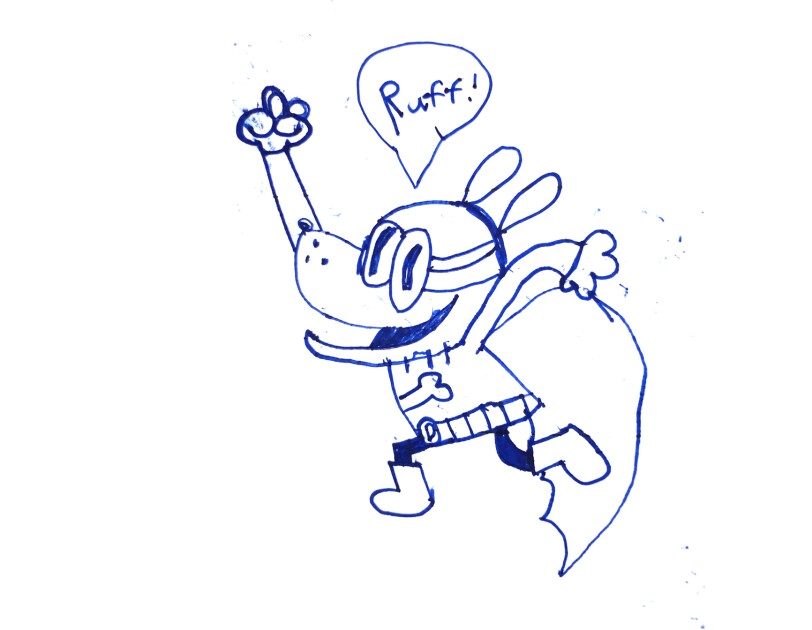 Tabitha Pokorny got to show Dav Pilkey her drawing of his Dog Man character. 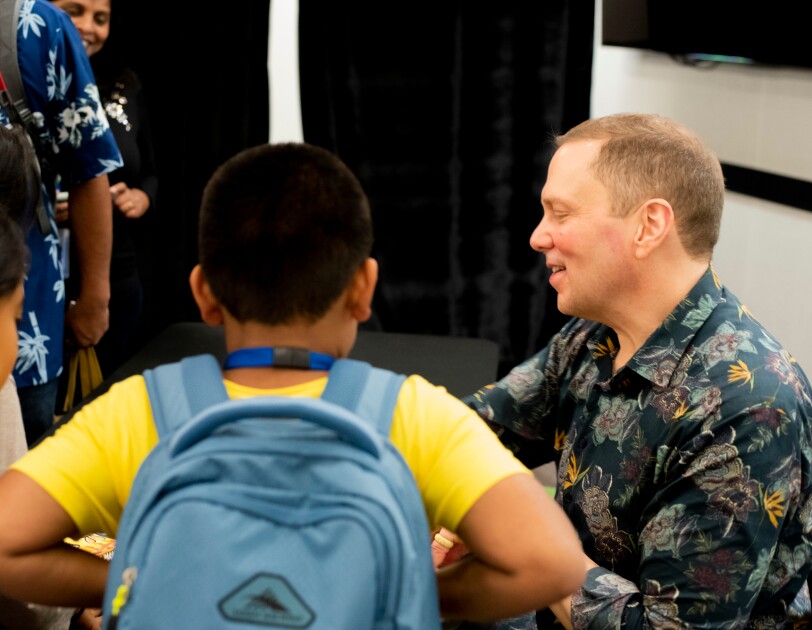 Pilkey said his book-signing events leave him with more energy than when he started, even though they sometimes last several hours.
Photo By DAVE QUIGG 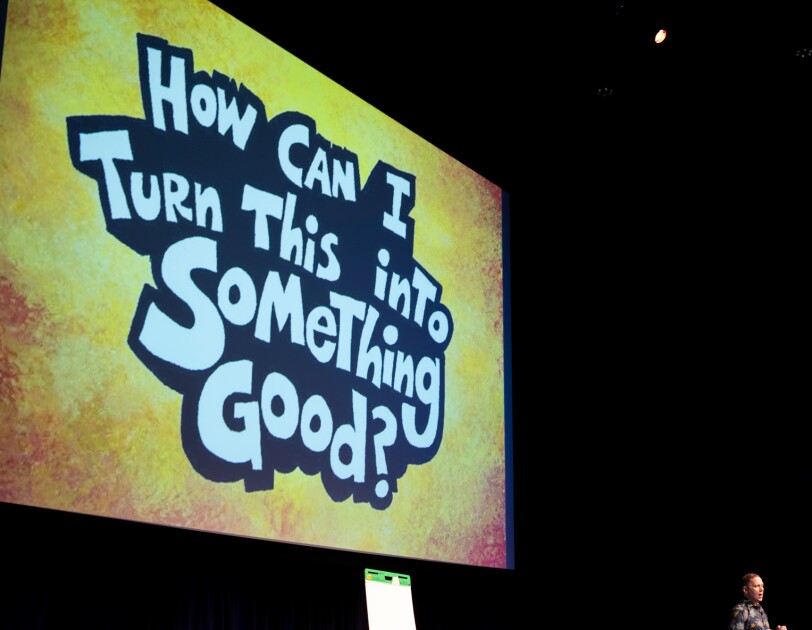 Dav Pilkey could have remained Dave Pilkey, but he turned a malfunction into something good. The pizza joint where he worked in high school used a label maker to stamp out the letters of each employees name for their name tag. The machine's D, A, and V worked. The E didn't. So he was Dav at work and eventually decided to be Dav in other parts of his life. "It's dumb, but it's true," Pilkey said.
Photo By DAVE QUIGG 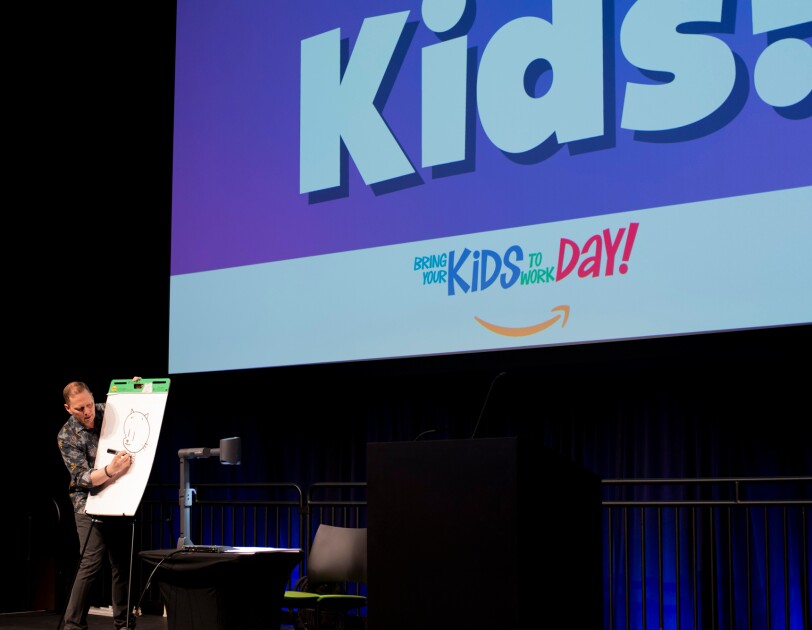 Bestselling author and illustrator Dav Pilkey drawing his Li'l Petey character in front of hundreds of children and parents during Amazon's Bring Your Kids to Work Day.'
Photo By DAVE QUIGG 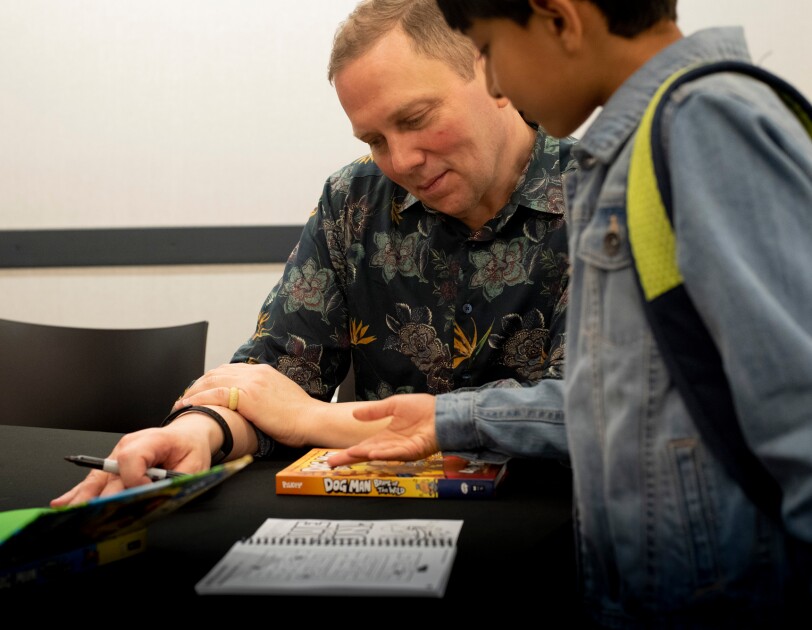 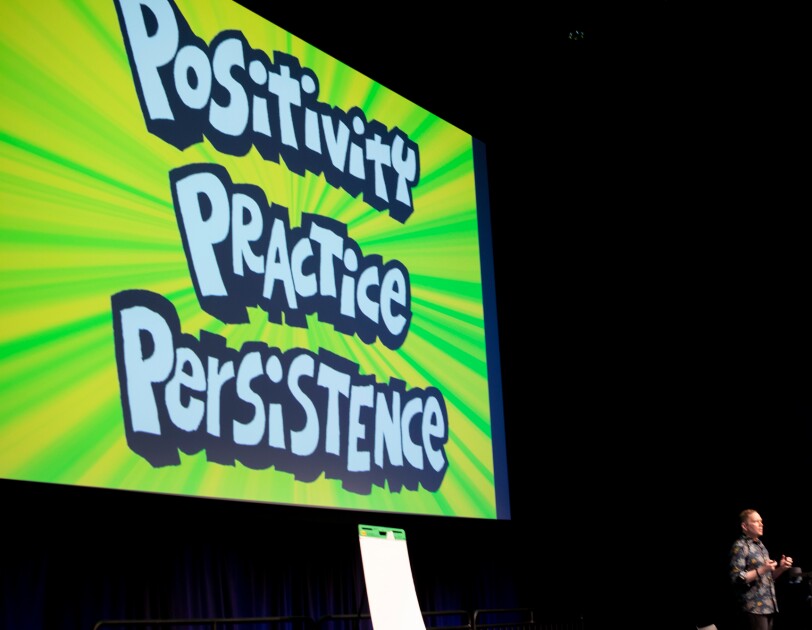 Dav Pilkey on stage with his big message.

Pilkey raised his right hand, and the boy jumped to meet him in a high-five.

The moment sums up how Pilkey has made an infectious joy out of the shame he felt as a boy, when his ADHD and dyslexia got him kicked out of classrooms and left him believing he was stupid. Amazon employees and their children laughed along with Pilkey's uproarious, inspiring account of his life story when he came to the company's headquarters in Seattle this summer and appeared in front of a series of packed audiences for Bring Your Kids to Work Day.

Taking her daughter to meet Pilkey was emotional for Tiffany Pokorny, who's been an Amazonian since 2012. Pokorny teared up walking away from the table where the author was signing copies of Dog Man: Brawl of the Wild. "Tabitha recently was diagnosed with ADHD, and I actually hadn't told her until the other night when I told her that Dav Pilkey was coming. And she said, 'I love him. Do you know he has ADHD?'"

Pokorny seized that moment to tell Tabitha about her own diagnosis. It went well. "We were really worried that she would be upset about it. But just knowing that one of her favorite authors had it was really powerful."

That sense of not being alone also blossomed on the other side of the Amazon campus where Crystal Swain-Bates read from her book Big Hair, Don't Care and answered questions from kids and parents. Amazon Web Services employee Jarrod Ammons brought his 5-year-old son, Elijah, to see Swain-Bates. Ammons nodded along and let loose hearty laughs as Swain-Bates read the kids her picture book about an exuberant black girl with hair a lot like Elijah's.

"He makes comments sometimes that he wishes his hair was different," Ammons said. "And I just wanted to give him an opportunity to see his hair celebrated. It's important. So that's why we made the trek to this side of campus." 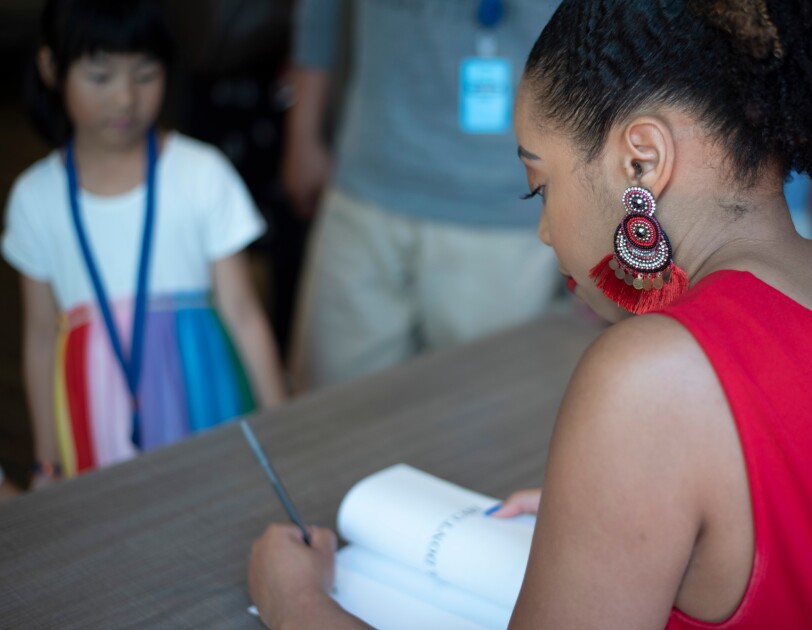 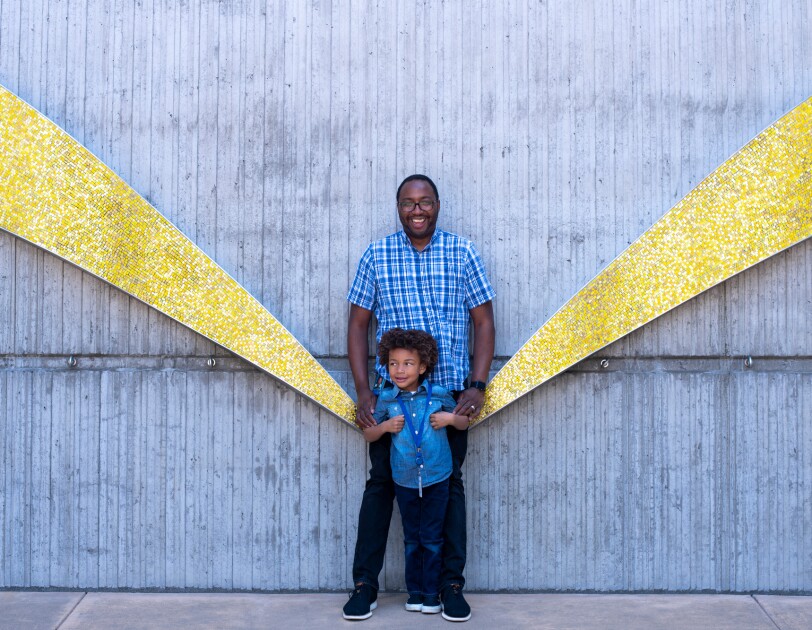 AWS employee Jarrod Ammons and his son, Elijah, just before they walked to an Amazon Future Engineer event at Bring Your Kids to Work Day.
Photo By DAVE QUIGG 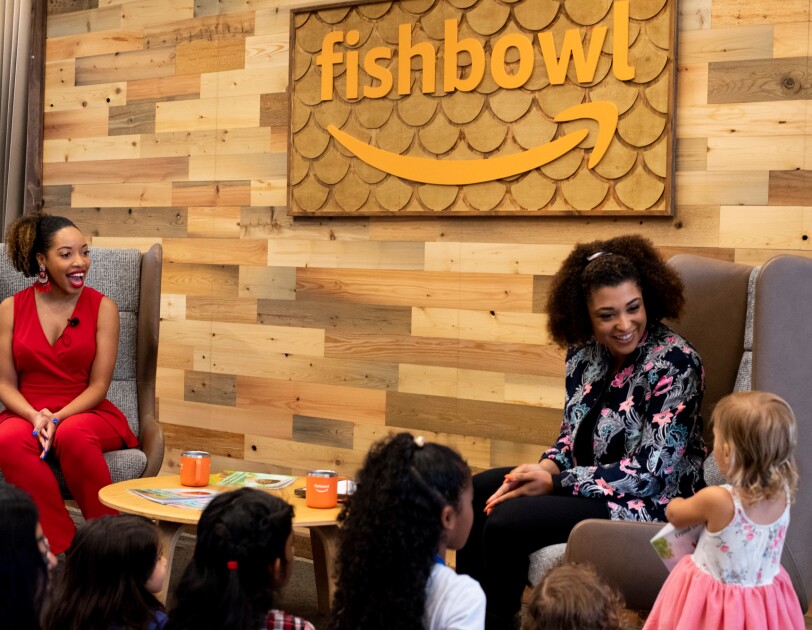 Author Crystal Swain-Bates (left) listens to a comment from one of the youngest members of her audience. Tori Sepand (right), a program manager on Amazon's Retail Experience Design team, moderated the event.
Photo By DAVE QUIGG 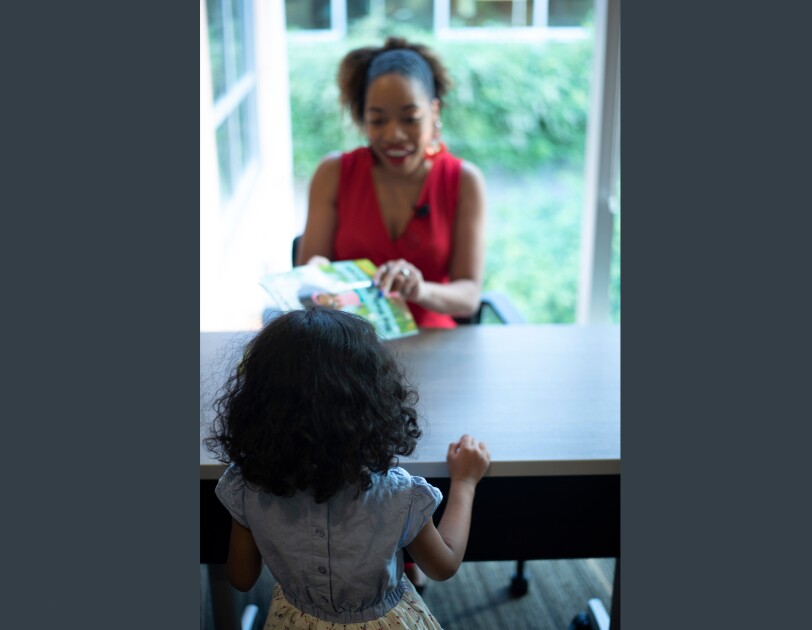 Counting Amazon employees, spouses, partners, caregivers, and children, more than 21,000 people participated in Bring Your Kids to Work Day. Ammons was savoring the full slate of events planned for Elijah and thousands of other young visitors.

"We're about to go to the Amazon Future Engineer session and teach him to write his name in binary," Ammons said. "We're excited about that. Just having access to these kinds of resources is really impactful, especially as a kid of color."

Back on the other side of campus, Pilkey's presentation was a mix of jokes, autobiography, live drawing, and steady affirmation of kids facing ADHD, dyslexia, or any other roadblock. He delivered a mantra of "positivity, practice, persistence" and passed along the question his mom coached him to ask himself during hard times in his childhood and beyond: "How can I turn this into something good?"

That's the spirit behind Pilkey's purposeful choice to react with a high-five, rather than consoling words, when he meets a child with ADHD or dyslexia. "Some of the kids, it almost seems like it's the first time that they smiled when it came to their diagnosis — you know, that they were like, 'Oh yeah. Maybe it's gonna be okay,'" he said. "That happens a lot. It happens almost everywhere I go."

I want to show you all of these different people, so that you know you can do any of these things. You're not limited as a result of what you look like.

So Pilkey offers today's kids the message he needed to hear back when he was a boy banished to the school hallway. "I just had so much shame growing up because nobody knew anything about ADHD," he said in an interview after his Bring Your Kids to Work Day appearances. "I just thought that something was wrong with me. And then, with dyslexia on top of it, just so much shame, so much embarrassment. I grew up thinking I was dumb. And I just don't want kids to go through that. I don't want any kids to think that they’re dumb. I want kids to know that it's okay to think different, and it's okay to learn differently, to learn at your own pace, to read at your own pace. Let's stop the shame and celebrate being different."

That sentiment is perfectly in harmony with why Swain-Bates writes her books, self-publishes them with Amazon's Kindle Direct Publishing, and goes out into the world to meet readers. "You can't be what you don't see," she said, "I want to show you an author. I want to show you an engineer. I want to show you all of these different people, so that you know you can do any of these things. You're not limited as a result of what you look like. I remember the first time I ever met a black author. When that black lady came to my school and she read her book, I was the kid in the audience who was like, 'Wow, this is amazing.'"

Before joining the Amazon Stories team in 2012, Dave Quigg’s jobs included newspaper reporter, blogger, writing tutor, and stay-at-home dad.
How did you like this story?
Yawn
It's OK
It's good
It's great
I love it!
25 Ratings
Thanks!
Sustainability

From the lab to the fulfillment center, employees contributed to the innovations behind a mailer that can be recycled in the same bin as Amazon’s iconic box.
Continue Reading
Working at Amazon

As part of the Upskilling 2025 pledge, Amazon makes graduate-school-level training free for its employees through Machine Learning University.
Continue Reading
Working at Amazon

Today, Amazon offices around the world are filled with door desks, based on Bezos’ early design.
Continue Reading
The Australia bushfire crisis
What Amazon is doing for support organizations on
the frontline of the Australian bushfire crisis, and how you can help.
See how you can help
X
Out for Delivery
Thank you!
Please try again
Quick news and rich insights from inside Amazon, delivered directly to your inbox every few weeks.
Check your inbox shortly for your very first Out for Delivery email. We’ll reach out every few weeks with more.
If you’re not redirected back to the blog in a few seconds, click here.
Looks like we had some trouble authenticating your entry. Let’s try again...
Amazon Privacy Policy | Opt-out Anytime