The director of the Amazon Literary Partnership never stops walking in the shoes of the community he supports.
By Dave Quigg

The writer guzzled his coffee like it was some kind of potion for changing reality. He was having a very specific type of bad day: the kind that strikes when you have every reason to expect you’re going to have a fantastic day, and then you don’t.

Right at that moment, he was supposed to be recording a nationwide radio interview about Kickflip Boys: A Memoir of Freedom, Rebellion, and the Chaos of Fatherhood, the latest and most personal of the five books he’s published. The interview got canceled, he was told, because the torrent of national political news left no airtime to devote to a book about raising sons whose exuberant grade-school skateboarding careened into teenage drug use, curfew-busting, and run-ins with law enforcement.

In lieu of moping all day about the hundreds of thousands of potential readers who would not be hearing his voice on the radio, Neal Thompson finished his coffee, crossed Seattle's Sixth Avenue, and got back to work running the Amazon Literary Partnership, a program that's spent the last nine years donating to nonprofits that support writers. Since the effort started in 2009, Amazon has provided grants to more than 100 writing centers, residencies, fellowships, literary magazines, small publishers, and translation programs.

Thompson's work to help these organizations holds deep personal meaning because he's spent so much time walking in the shoes of a working writer. He joined Amazon after about a decade of striving to make a full-time living by writing books. During those years, he juggled fatherhood and his literary ambitions, spending many afternoons at skate parks, typing away on his laptop while his sons honed their skills nearby. Writing never fully paid the bills. His wife's career provided the family's financial stability. Thompson ultimately decided he "needed to get back to a day job and get a steady paycheck and health insurance," he said. 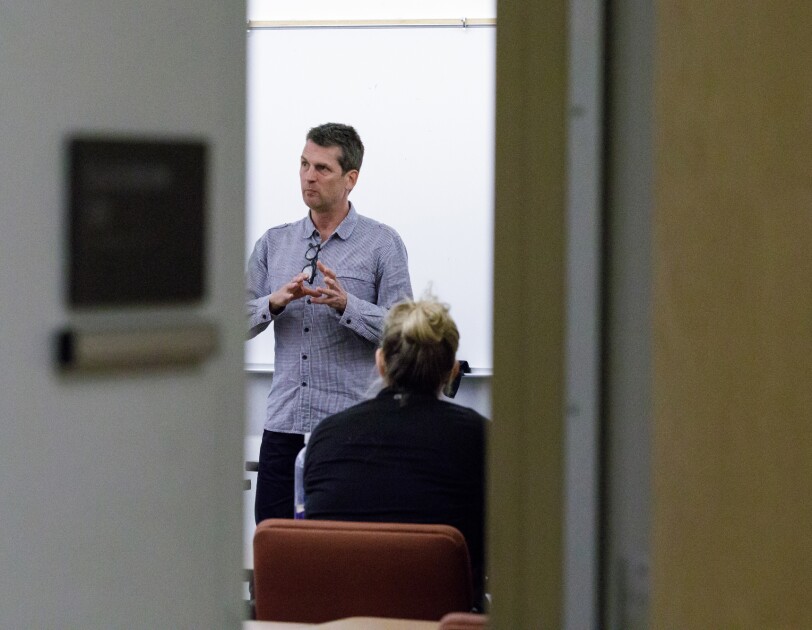 Author and Amazon employee Neal Thompson speaks to students in a class called "Publishing Your Writing."
Photo By DAVE QUIGG 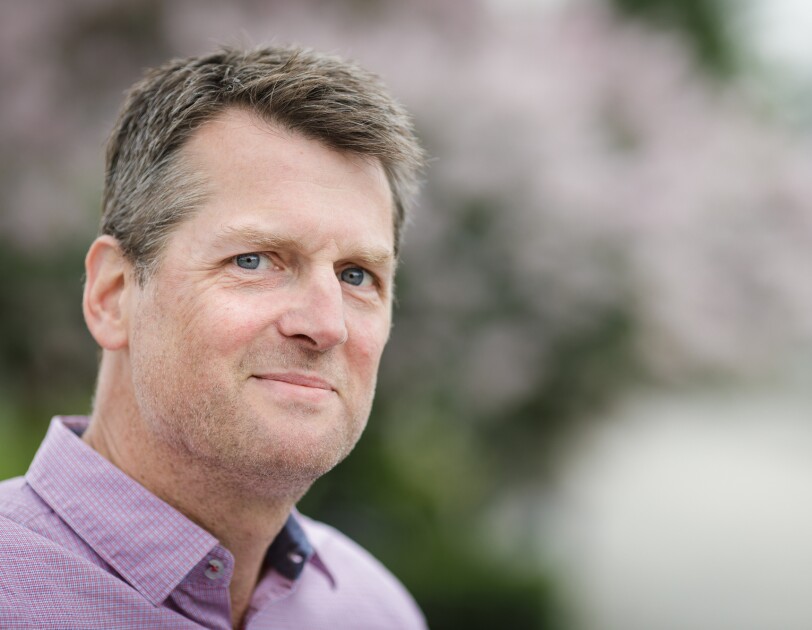 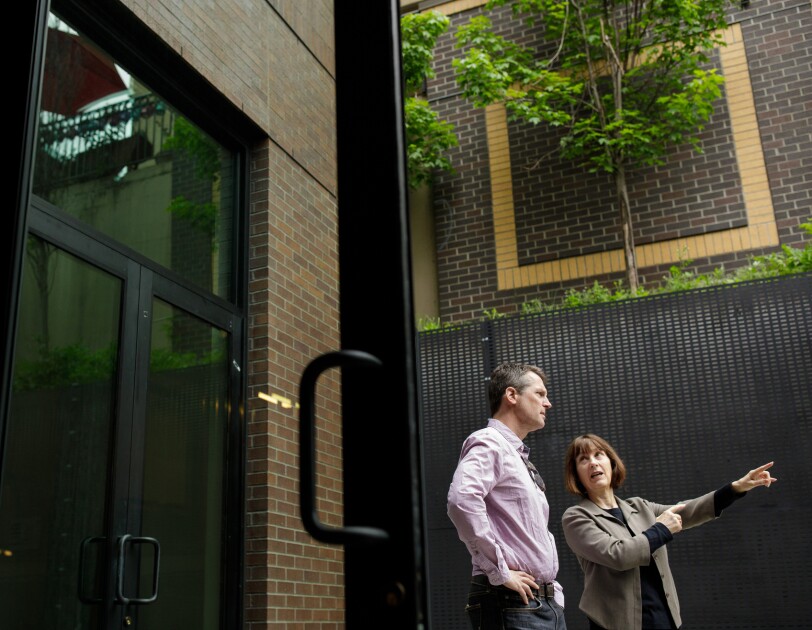 On the day of the canceled national radio interview, part of Thompson's workday took him to a classroom at the University of Washington, where students in a course called "Publishing Your Writing" posed sharp, enthusiastic questions about everything from Kindle Direct Publishing and setting up their own Amazon author pages to what it was like when his biography about Robert "Believe It or Not!" Ripley landed him an appearance on The Daily Show in 2013.

"Was it Jon Stewart?" one student wanted to know. It wasn't. Stewart was on vacation, and John Oliver was filling in as host.

"We talked backstage a little bit, and he asked all kinds of questions about the book, and he knew all these little details," Thompson told the class, lighting up as he relived the joy of being interviewed by someone who cared enough to actually read his work. "It was an absolute treat and a career highlight, as you can imagine. It was a blast."

There was an unspoken spark inside every question the students asked: they nurture dreams of doing what Thompson has done. Just by standing in front of them, he was a reminder that publishing a book — and getting invited to discuss it on TV — is a thing that can happen to people in the real world. Thompson urged the students never to talk themselves out of pursuing their goals to the fullest.

"You can convince yourself that 'Oh, my story's not good enough. Who's going to read it? I don't have an agent yet,'" he said, getting nods of recognition from the class. "Whatever the reasons are, you might hold back when you shouldn't. The truth is that agents and publishers and TV producers and magazine editors, they're all looking for stories. They're looking for your story. They don't know it yet. You don't know it yet. But that's what they're looking for. If your personality and the truth of what you're trying to say comes through, it jumps off the page."

While on campus, Thompson also visited leaders of the university's creative writing program to tell them that they'd been approved for another year of financial support from Amazon. UW's Master of Fine Arts in creative writing is among the longest-running recipients of the grants that Thompson manages.

"It means so much for me to see them face to face and learn firsthand what they're doing and see the facilities, get a sense of the enthusiasm," Thompson said. "I take at least a dozen trips a year. These are very earnest and intense organizations. They love what they're doing. They need help, and there's just not a lot of help out there. It's wonderful when we're able to say 'yes' because some of these groups have tiny budgets. I like that our grants send a message that we believe in what they're doing and show that Amazon cares about storytelling and writers and writing programs. Because we do."

This desire to connect and affirm is the common thread running through Thompson's work with the Amazon Literary Partnership and his own career as an author. Discussing the process of writing his new memoir in an interview with The Amazon Book Review, he said, "it began to feel like a story other parents might find useful. I thought, ‘maybe there are other dads who felt vulnerable and flawed, and maybe they’d feel less alone if they read about another dad slogging his way through the chaos of fatherhood.’ The more personal the story got, the more real it felt."

Before joining the Amazon Stories team in 2012, Dave Quigg’s jobs included newspaper reporter, blogger, writing tutor, and stay-at-home dad.
How did you like this story?
Yawn
It's OK
It's good
It's great
I love it!
37 Ratings
Thanks!
Working at Amazon

How much does Amazon love dogs? Just ask one of the 7,000 pups that “work” here.
Continue Reading
Sustainability

From the lab to the fulfillment center, employees contributed to the innovations behind a mailer that can be recycled in the same bin as Amazon’s iconic box.
Continue Reading
Community

By offering logistical assistance and teams of volunteers, Amazon is committed to providing post-disaster relief in areas where customers and employees live and work.
Continue Reading
The Australia bushfire crisis
What Amazon is doing for support organizations on
the frontline of the Australian bushfire crisis, and how you can help.
See how you can help
close
Out for Delivery
Get the best of the Amazon blog, including the latest news, top stories you may have missed, and editor's picks, delivered right to your inbox.
Sign Up