The Amazon Alexa Prize Competition just wrapped up, with a University of Washington team winning the $500,000 first prize.

What is the goal of the competition?
Create a socialbot that can converse engagingly and coherently with humans for 20 minutes on popular topics and news events such as entertainment, fashion, politics, sports, and technology.

Who participated?
Fifteen university teams qualified for the competition’s semifinal round and then the three finalists were selected. Alexa customers had millions of interactions with Alexa Prize socialbots throughout the competition, totaling more than 40,000 hours of conversation. 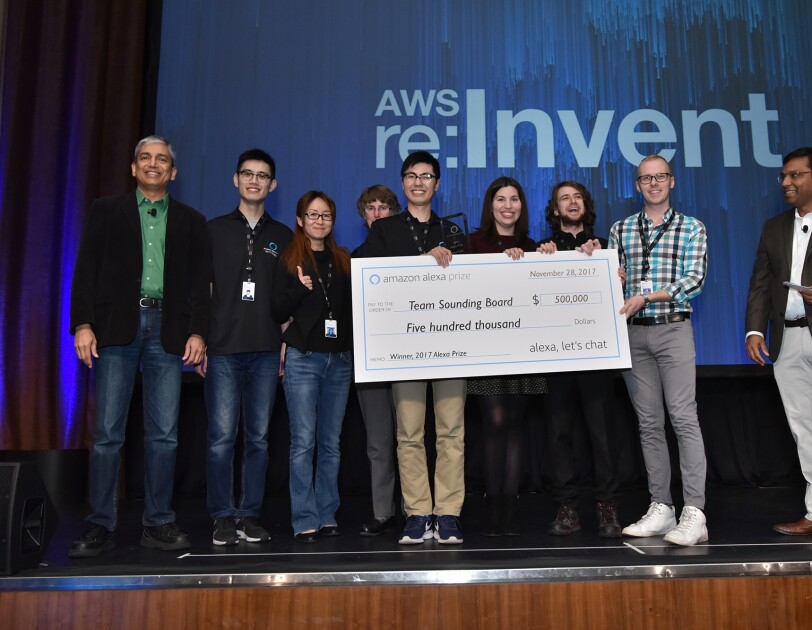 Team Sounding Board, from the University of Washington, accepts its first-place prize from Ashwin Ram (far left) and Rohit Prasad (far right). 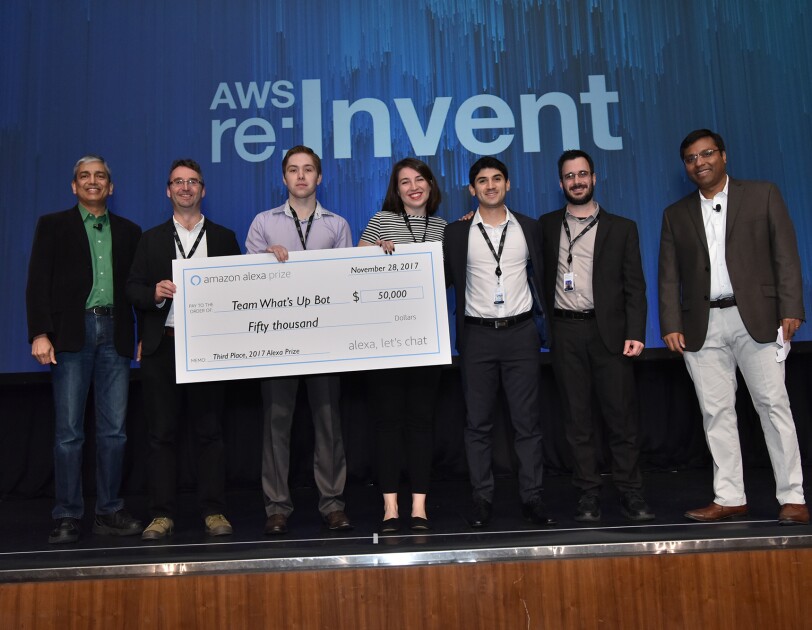 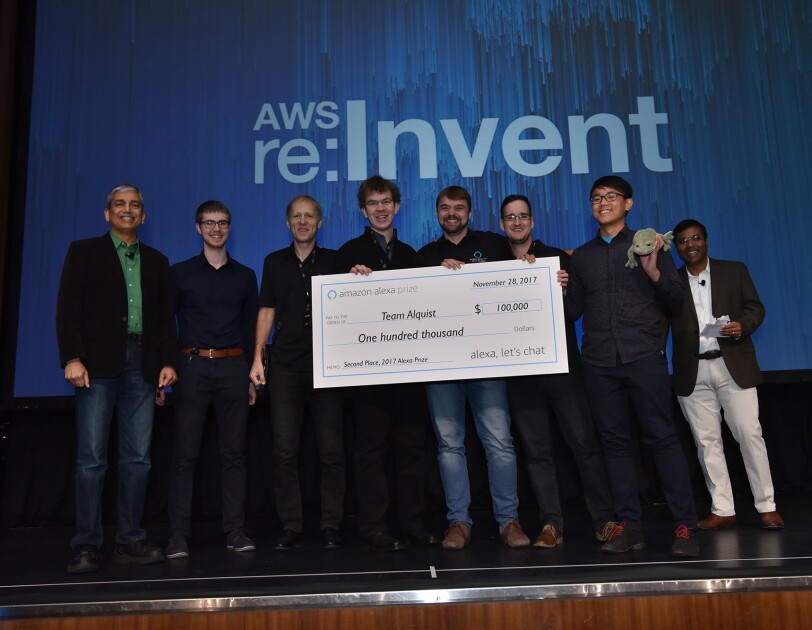 Which teams won prizes?
Team Sounding Board earned the $500,000 first-place prize by achieving an average score of 3.17 on a 5-point scale from a panel of independent judges and an average conversation duration of 10:22.

The runner up, team Alquist from Czech Technical University in Prague, won a $100,000 second prize, while a third-place prize of $50,000 was awarded to team What’s Up Bot from Heriot-Watt University in Edinburgh, Scotland. The winners were honored on stage at re:Invent 2017 by Rohit Prasad, vice president and head scientist of Alexa Machine Learning, and Ashwin Ram, senior manager, AI Science, Alexa Machine Learning, and leader of the Alexa Prize initiative.

To say that this inaugural competition was a success would be an understatement. Amazon is incredibly grateful to all the student teams who exercised our Alexa Skills Kit and AWS cloud to create socialbots for Alexa that took a great step forward in conversing coherently and engagingly with humans.

Who won the Grand Challenge?
While the student teams’ socialbots surprised and delighted Alexa customers and the panel of independent judges who judged the competition’s final round, none was able to meet the Alexa Prize Grand Challenge of maintaining a coherent and engaging conversation for 20 minutes. A $1 million research grant would have been awarded to the winning team’s university, if its socialbot had met the challenge.

Congratulations to team Sounding Board from the University of Washington and all the student teams who participated in this year’s competition. You can learn more about the competition here.

AlexaTechnologyRobotics Students
How did you like this story?
Yawn
It's OK
It's good
It's great
I love it!
17 Ratings
Thanks!
Devices

Announcing new features and integrations for customers and new tools and services for automakers and suppliers.
Continue Reading
Devices

As we head into 2020, we celebrate the best Alexa skills that developers have created to make the everyday easier, more entertaining, and more delightful for customers.
Continue Reading
Community

New Alexa skill supports teens dealing with major stressors.
Continue Reading
The Australia bushfire crisis
What Amazon is doing for support organizations on
the frontline of the Australian bushfire crisis, and how you can help.
See how you can help
close
Out for Delivery
Get the best of the Amazon blog, including the latest news, top stories you may have missed, and editor's picks, delivered right to your inbox.
Sign Up